Hurricane forecasts can be confusing—here’s a helpful glossary

All the terms you need to know to stay ahead of the storm. 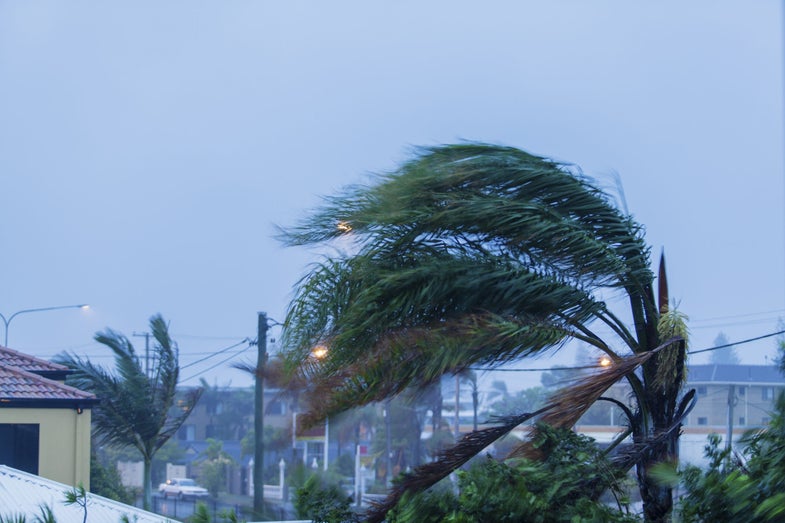 Most people know at least a little about the weather, but some terms meteorologists use to describe incoming storms are complicated even for experienced enthusiasts. Here’s a quick explanation of some of the terms you’ll hear as we chug through the last weeks of hurricane season:

Advisory: An advisory is a forecast released by the NOAA’s National Hurricane Center (NHC), the agency responsible for predicting tropical cyclones in the Atlantic and eastern Pacific basins. Advisories are issued every six hours when a storm is out to sea, and every three hours when the storm is close to land.

Cone of Uncertainty: The cone of uncertainty is the margin of error in a hurricane’s track forecast. Track forecasts have gotten much better over the past decade, but small wobbles or a complicated weather pattern can make it harder to predict a storm’s path. The average error in a track forecast five days in advance is about 230 miles. The center of a storm historically stays within the cone about two-thirds of the time.

Disturbance: A tropical disturbance or a tropical wave is a cluster of showers and thunderstorms along a trough, or elongated area of low pressure, that forms in the tropics. Disturbances serve as the nucleus for future tropical cyclone development. The strongest hurricanes usually form from tropical waves that come off the western African coast.

El Niño/La Niña: El Niño and La Niña are temperature patterns in the waters of the eastern Pacific Ocean near the equator. El Niño occurs when water temperatures are warmer than normal for more than half a year, and La Niña occurs when those same waters are cooler than normal. These patterns can affect Atlantic hurricane season through wind shear (defined below). El Niño fosters more thunderstorms in the eastern Pacific, increasing westerly wind shear that can kill storms over in the Atlantic. La Niña has the opposite effect.

Ensemble Model: An ensemble model is a weather model that’s run multiple times with slightly different starting conditions. Ensemble weather models are the butterfly effect in action, giving meteorologists a better idea of the range of possible outcomes and allowing them to better refine their forecasts. The graphics that show ensemble models are often called “spaghetti plots” because of their noodly appearance.

Eye/Eyewall: Strong thunderstorms that form around the center of a tropical cyclone make up the eyewall. The thunderstorms in the eyewall are the engine that drive a tropical cyclone’s power. These storms evacuate massive amounts of air into the upper atmosphere, leaving low pressure at the surface. The eye forms when air from high above the surface rushes down to fill the void—the cloud-free eye forms because air dries and warms as it descends.

Eyewall Replacement Cycle: It’s hard for nature to remain at full fury for too long. Strong hurricanes reorganize themselves every day or two by creating a new eye. This process, known as an eyewall replacement cycle, begins when a newer, bigger eye forms in a storm. The new eye engulfs the old eye and causes it to dissipate. This process temporarily weakens a storm, but also causes it to grow in size, and a storm can restrengthen once the process is complete.

Invest: An invest is an area that the NHC is watching for possible tropical development. These disturbances are assigned names—such as Invest 97L—to make it easier to track them with satellites and weather models.

Outflow: Tropical cyclones evacuate massive amounts of air from the surface to the upper levels of the atmosphere. The outflow is the mechanism that exhausts this air away from the storm. You can see outflow on satellite as vast fields of cirrus clouds spiraling away from a strong storm. Good outflow is important in helping a storm grow in size and strength.

Potential Tropical Cyclone: A Potential Tropical Cyclone (PTC) is the name given to a tropical disturbance that hasn’t yet formed into a tropical cyclone, but is forecast to do so before hitting land. A new term introduced in 2017, this designation allows forecasters to bust through bureaucracy and issue watches and warnings before the storm has formed, giving people more time to prepare for hazardous weather.

Precipitable Water: Precipitable Water (PWAT) is a measure of the amount of moisture in the atmosphere. Measured in either inches or millimeters, this metric tells you how much rain would fall if all the moisture in one column of the atmosphere condensed and fell as rain. Higher values indicate higher moisture, which allow thunderstorms to produce more prolific rains.

Rapid Intensification: A tropical cyclone can strengthen very quickly in a favorable environment. Harvey grew from a tropical storm to a category four hurricane in 36 hours. Rapid intensification occurs when a storm’s maximum winds increase 30 knots or more in a 24-hour period. Forecasters still have trouble predicting rapid intensification in advance, but they’re getting better at it.

Saharan Air Layer: A mainstay of hurricane season coverage for the last couple of years, the Saharan Air Layer (SAL) is a dry, dusty airmass that blows across the Atlantic from Africa’s Sahara Desert. The SAL starves disturbances of the moisture they need to develop into tropical cyclones.

Storm Surge: The flood of seawater pushed inland by the strong, persistent winds of a landfalling storm. Storm surge flooding can reach more than a dozen feet above ground level in the strongest storms. Most people who die where a storm makes landfall don’t die from wind damage, but rather drowning as a result of storm surge.

Subtropical: A low-pressure system that displays some tropical characteristics, but is not fully tropical. The NHC issues advisories and warnings on subtropical cyclones just as they would for fully-tropical cyclones since these storms are close enough, and have similar enough impacts, that they warrant the same level of attention.

Wind Shear: Winds changing speed and direction with height through the atmosphere. Upper-level winds that are too strong or change direction too abruptly can disrupt thunderstorms as they try to develop into a tropical cyclone. Wind shear can tear away at even the mightiest storm in just a few hours.