Pluto Has Young, Icy, Mountains On Its Surface

The New Horizons flyby is over, but now the real fun begins 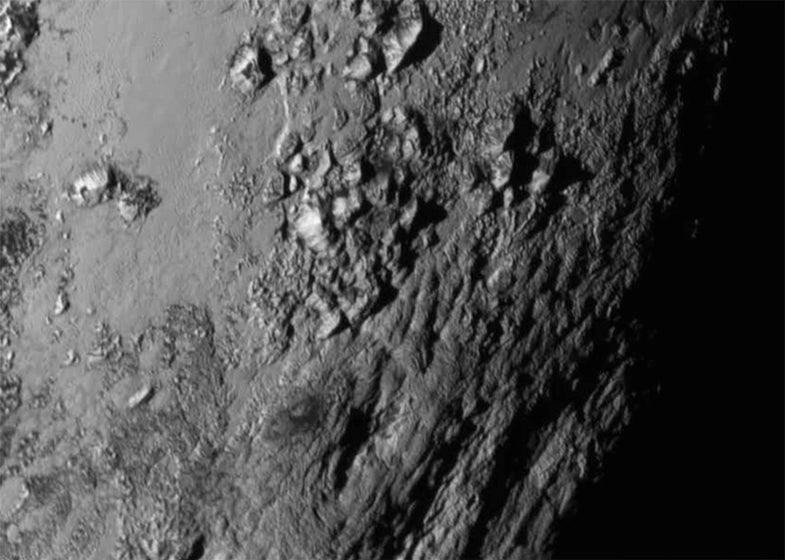 The first detailed images of Pluto’s surface ever captured are in, and they don’t disappoint. The dwarf planet’s southern tip contains relatively young mountains reaching up to 11,000 feet high, according to a breathtaking new photo taken by NASA’s New Horizons spacecraft during its flyby yesterday and released to the public this afternoon. “They look to be tens of miles wide, so they stand up respectively to Rocky Mountains on Earth,” said John Spencer, deputy geology and geophysics lead on New Horizons, and a scientist with the Southwest Research Institute.

According to a statement from Jeff Moore, another scientist on the New Horizons’ geology team, the fact that the surface lacks many visible impact craters suggests, “this is one of the youngest surfaces we’ve ever seen in the solar system” — 100 million or so years old, compared to the solar system’s 4.6 billion years.

Even more intriguingly, the mountains are probably made of water-ice, because the methane and nitrogen that cover much of Pluto aren’t strong enough to build such tall formations.

As for what could be causing the mountains to form, scientists think there could be lots of action taking place beneath Pluto’s surface. “We predicted that if we saw steep topography on Pluto… then there must be internal activity that’s dredging nitrogen up like cryovoclanism or geysers, or some other process that’s active into the present on this planet, ” said Alan Stern, principal investigator on the New Horizons mission. “We haven’t found geysers or cryovolcanoes, but this is very strong evidence that will send us looking. “

Updated shortly after publication with additional reporting by Sarah Fecht.