Fly By Pluto In This New NASA Video 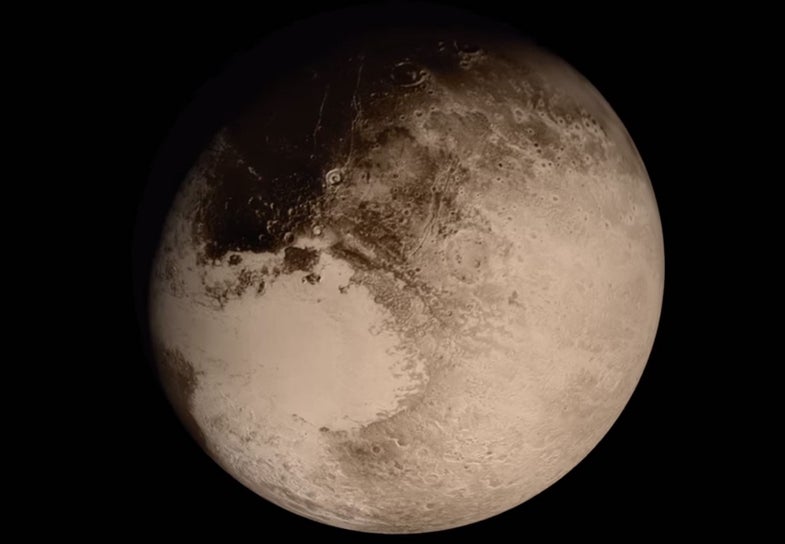 About the size of a grand piano and packed with instruments, the New Horizons spacecraft didn’t have a lot of room for human cargo. But the good news is you can still feel what it was like to blaze past Pluto at a speed of about 31,000 miles per hour. A new time-lapse video from NASA stitches together the images that New Horizons snapped before, during, and after its encounter with the dwarf planet on July 14, and it gives the sense that you’re riding along with the spacecraft on its epic journey.

Somehow, the footage is even more impressive than the simulation made by Vimeo user Bjorn Jonsson two weeks ago.

And it’s a view we likely won’t see again any time in the foreseeable future, as it took New Horizons more than 9 years to get to Pluto, and the mission almost didn’t get funding to begin with. However, the New Horizons team has its sights hopefully set on a new target: 2014 MU69, a 30-mile-wide rock in the Kuiper belt. The object is about a billion miles further from the Sun than Pluto.

We’ve never seen a Kuiper belt object (KBO) up close before–New Horizons is the first spacecraft to visit this region–but these icy rocks may preserve clues about the beginnings of the solar system and the origins of life on Earth.

If the mission to 2014 MU69 gets funded by NASA, it’ll take just a few adjustments in New Horizons’ trajectory to send it hurtling past the KBO in 2019. If the extended mission doesn’t get funded, the spacecraft’s momentum will carry it farther and farther from the Sun until it leaves our star system altogether. There are certainly worse ways to go, and that would eventually happen even if New Horizons does get to visit 2014 MU69. But fingers are crossed are for the mission extension. After all, it’s not every day that we’re in the neighborhood.