It’s Official: New Horizons Made It To Pluto And Beyond 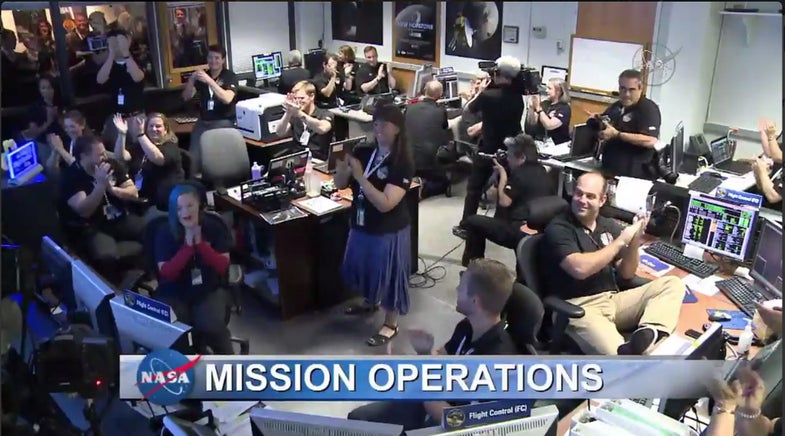 New Horizons has phoned home. After a ten year, 3 billion mile journey, the spacecraft flew by Pluto this morning and has lived to tell the tale. At approximately 9pm, the New Horizons mission operations in Maryland locked on to the spacecraft’s signal, sent across billions of miles at the speed of light. All systems reported nominal, which is NASA lingo for “A-okay.”

“We have a healthy spacecraft, and we’re outbound for Pluto,” said Alice Bowman, the mission operations manager.

Because of the sheer distance to Pluto and the spacecraft’s need to focus on data collection during its short trip through the Pluto system, all of its movements were pre-programmed so that it could function on autopilot during the flyby. Although the team calculated at 2 in 10,000 chance that the spacecraft wouldn’t survive the encounter, Alan Stern, the mission leader, is surely breathing a sigh of relief right now.

Bowman noted that the spacecraft’s data recorders are storing exactly as much data as expected, indicating that it took all the measurements as planned. The spacecraft has now passed Pluto and is turning around to look at the former planet as it is framed against the sun. The sun’s interaction with Pluto’s atmosphere can tell the instruments what’s inside it. Tomorrow it should return some pretty amazing pictures of Pluto–including one 10 times higher in resolution than the fantastic imagery we’ve seen so far.

The Pluto flyby means the United States has now sent a spacecraft to every major world in the solar system. Earlier in the day, John Grunsfeld from NASA’s Science Mission Directorate compared this achievement to the European explorers who mapped the globe. “Five hundred years from now … astronomers will look back at this time and say that this was the classical age of solar system exploration.”

Updated July 14 at 10:13 pm to include new information from a NASA press conference.