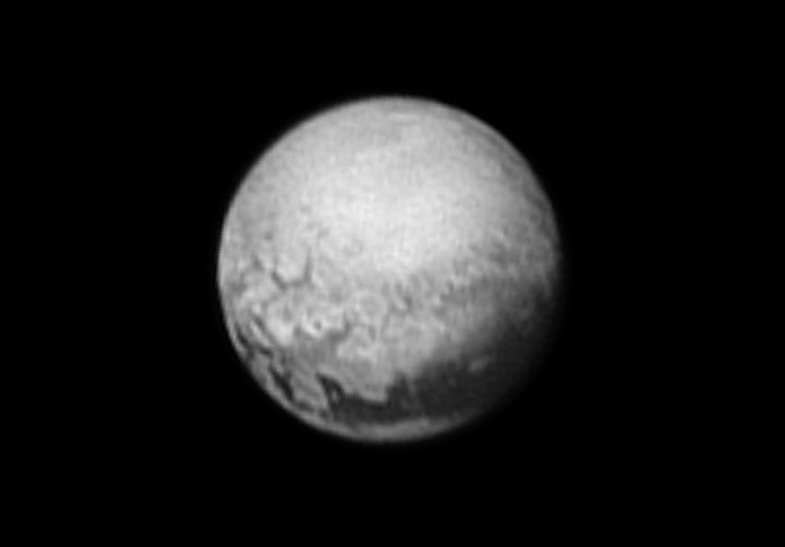 As New Horizons pulled up to within 3.3 million miles of Pluto on July 9, the dwarf planet's surface features became clearer. "We're close enough now that we're just starting to see Pluto's geology," said New Horizons program scientist Curt Niebur in a statement. "It's a unique transition region with a lot of dynamic processes interacting." Of particular interest are the strange polygonal shape in the middle left-hand side, and the diagonal swipe of texture cutting from the lower left to middle right. The team hopes to learn more about these features as New Horizons moves in closer. NASA/JHUAPL/SWRI
SHARE

After a nine-and-a-half year, three-billion-mile journey, the New Horizons spacecraft is almost to Pluto and we are so freaking excited about it. The spacecraft will explore a completely new realm of our solar system, and you can watch history being made right here at 7:49 am EST on Tuesday, July 14.

If you’ve been living under a rock and haven’t heard about the Pluto flyby, here’s a quick primer on everything you need to know about the mission.

Although the countdown and all its excitement will happen in the early hours tomorrow, we won’t have confirmation that the approach was successful until around 9pm tomorrow. That’s because the spacecraft will be busy taking amazing pictures and data. The odds are very small (about 1 in 10,000) that dust or debris will mess up the spacecraft’s approach, but even still, New Horizons principle investigator Alan Stern says he’ll breathe a small sigh of relief when they get confirmation that the spacecraft is alright tomorrow evening.

The spacecraft has been flying on autopilot for most of its 9.5-year journey, so it should be all right, but the most dangerous part of the journey will be when New Horizons zips around near Pluto’s smaller moons. This region, known as the Kuiper Belt, is filled with rocks and debris, which kick up a lot of dust. Conditions could become hazardous for the spacecraft.

Assuming all goes as planned, the spacecraft’s closest approach will bring it 7,800 miles away from Pluto. While it’s there, it will measure the surface geology and composition of Pluto and its largest moon, Charon. “We’ll have stereo maps so we can see how high the mountains are and how low the valleys are,” New Horizons’ Cathy Olkin said in a press conference.

After flying by Pluto and Charon, the spacecraft will turn back and watch the sun rise and set behind Pluto and Charon. Bucolic as that may seem, the purpose is scientific: As the sun shines through Pluto’s atmosphere, it will highlight any clouds or rings that may hover nearby, and also tell scientists what’s in inside the tiny planet’s atmosphere. Plus, it will reveal whether Charon has an atmosphere with Pluto, and if so, whether it steals that atmosphere from Pluto or generates its own.

There’s so much to be excited about, and the only downside is that it’s going to take a while for it to get back to Earth. The first information from the flyby will arrive Wednesday afternoon. The spacecraft will hoard everything else in its onboard memory storage, beaming it back bit by bit over the next 16 months. We can hardly wait.