Plus, is that a polar ice cap we see? 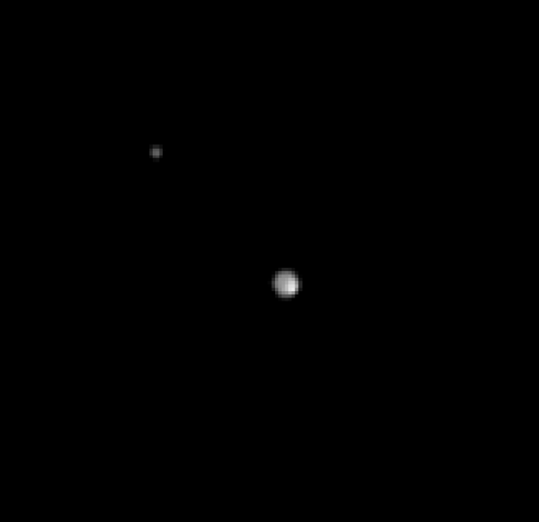 NASA’s New Horizons space probe has been on its way to Pluto since 2006. The spacecraft was in hibernation mode for most of its journey to conserve energy. But the vehicle recently “awoke” in December, allowing it to start snapping pictures as it approaches Pluto and its largest moon, Charon.

Today, NASA released a whole slew of images from New Horizon. Taken with the probe’s Long Range Reconnaissance Imager (LORRI) between April 12 and April 18, the pictures were assembled into a series of short “movies,” painting a picture of how Pluto and its moon rotate. Charon doesn’t revolve around Pluto; instead the two rocks revolve around a single center of mass once every 6.4 Earth days. The movies show one complete revolution, with the center of mass positioned in the middle of the frame.

As exciting as these home movies are, even more remarkable are what can be seen (barely) on Pluto’s surface. In all of the images taken by New Horizons, Pluto’s pole seems to be brighter than the rest of the areas on the dwarf planet’s surface. NASA researchers think this might be due to a polar “cap” of reflective snow. But don’t get your hopes up yet for another watery world in our solar system. Researchers think this “snow” is likely comprised of frozen nitrogen.

Hopefully we can decipher what these images mean when New Horizons makes its flyby of Pluto in July.