The oldest fossils of our species just got older 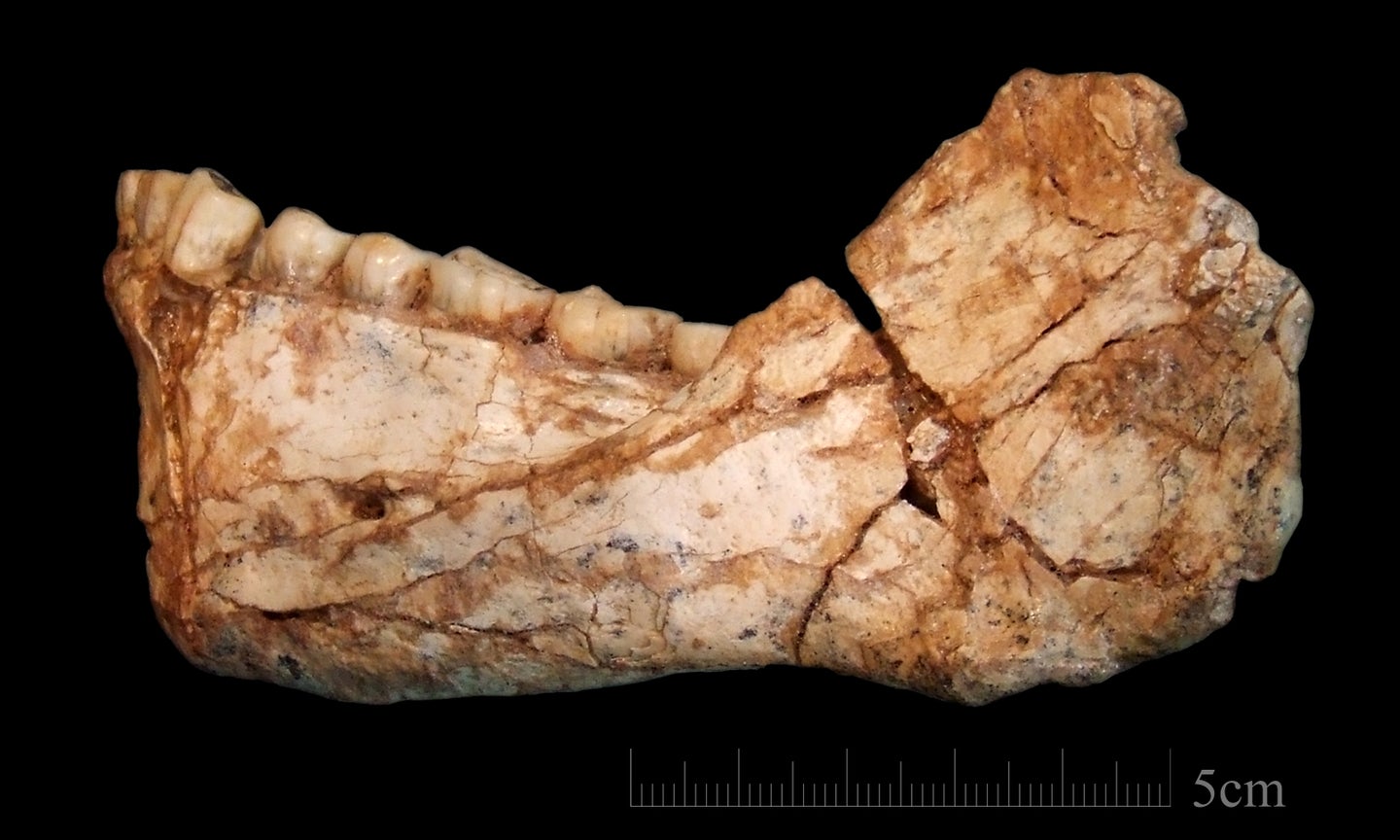 Fossils once mistaken for the 40,000-year-old remains of our Neanderthal cousins have just been thrust into the scientific spotlight. According to new research published in Nature, the Moroccan bones actually belong to our own species—and they’ve been around much, much longer than a paltry 40,000 years. With an estimated age of 315,000 years, the skeletal remains now represent the oldest known example of Homo sapiens. That’s over 100,000 years farther back in time than the species’ previous record holder.

100,000 years is an awfully long time for a species’ origin date to be pushed back. But the results just serve to confirm suspicions that many anthropologists have held for some time now. For a long time, most scientists believed that Homo sapiens evolved around 200,000 years ago, migrating out of East Africa to spread across the globe some 150,000 years later. But recent genetic evidence has suggested that our exit from the so-called cradle of humanity didn’t exactly happen en masse, and that our species may have come into its own much earlier than previously assumed.

Had the fossils studied in the new paper—found at an archaeological site known as Jebel Irhoud several decades ago—actually been 40,000 years old, they would represent a gaggle of humans who stayed put as their brethren set out into the world. But their ancient nature (confirmed using several methods, including the dating of stone tools found nearby that were reported on in a second Nature study) suggests instead that early humans spread out around Africa long before our species ventured off the continent.

“Until now, the common wisdom was that our species emerged probably rather quickly somewhere in a ‘Garden of Eden’ that was located most likely in sub-Saharan Africa,” study author Jean-Jacques Hublin of the Max Planck Institute for Evolutionary Anthropology in Leipzig, Germany told Nature Magazine. Now, “I would say the Garden of Eden in Africa is probably Africa—and it’s a big, big garden.”

That lines up with recent genetic evidence that suggests human groups split into different lineages long before our shared ancestors ventured away from the continent. That implied migration could also help explain the presence of 300,000-year-old tools like spear tips found all across Africa. They represent a shift from the large axes made by earlier human relatives, and scientists weren’t sure what had led to the shift in technology. But if our ancestors were already spreading out across Africa 300,000 years ago, the presence of the relatively advanced tools makes a lot more sense.

“We had a disjuncture,” study author Shannon McPherron, also from Max Planck, told The Atlantic. “We had a major transition in behavior but no biological transition to go with it. Jebel Irhoud fills that gap nicely.”

But how do we know the five individuals found at Jebel Irhoud are actually Homo sapiens?. They’re certainly quite similar to us, in the grand scheme of things. “The face is the face of somebody you could cross in the metro,” Hublin told National Geographic. The teeth are a bit large, but look more like our own than the chompers seen in other Homo species. But while you might catch a Jebel Irhoud lookalike on the metro, you probably wouldn’t have had much to talk about with one of these early humans: while their faces are relatively similar to our own, they have a more primitive looking brain case—suggesting our species started to look like it does now before it started to think as it does now.

“As evolution happens, as we go back in time, they are going to look less like modern humans.” Chris Stringer, an anthropologist at London’s Museum of Natural History who wasn’t involved in either of the new studies, told NPR. Even though the Jebel Irhoud specimens show an elongated skull shape, they have enough in common with us to convince him that they represent an earlier version of our own species. “They have faces which are really like bigger version of our faces,” he added. Still, several experts have expressed skepticism over the classification, suggesting that the skulls—while pretty convincingly 300,000 years old—don’t present enough classic signs of modern humanity to definitively distinguish them from being part of another species. It’s possible that the remains come from folks who were very close relatives of the earliest Homo sapiens ancestors, as opposed to being ancestors themselves.

Did the group that lived around Jebel Irhoud 300,000 years ago belong to a species that would persist, passing down their genetic material generation after generation until our more recent ancestors were born? Or did their lineage die out like so many of our close cousins? Researchers weren’t able to extract DNA from the bones—genetic material degrades over time, and much more quickly in hot, dry regions like Northern Africa—so we may never get a definitive answer.

But as scientists continue to push back the fossil record, filling in the gaps of humanity’s earliest history, other–as yet undiscovered–remains may make the story of Jebel Irhoud more clear.