An unholy mash-up of a camel, a rhino, and an elephant. 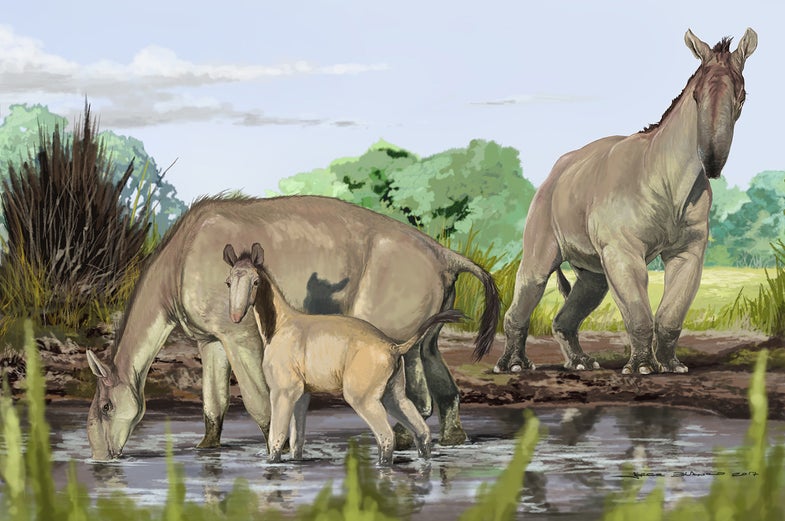 Some animals are just impossibly weird (see: the platypus). But members of the genus Macrauchenia are, by nature of being very much extinct, a tad more mysterious than even our most perplexing modern creatures.

When Charles Darwin first dug up pieces of these animals in 1834, he and paleontologist Richard Owen were seriously stumped. The animal’s body shape seemed fairly camel- or llama-esque (indeed, the name of the genus translates to “long llama”) but it had triple-hooved feet that resembled those of a rhinoceros. Most perplexing was its nose: unlike the majority of mammals, the nostril holes on its skull were high atop the head, between the eye sockets. Scientists now believe this is the sign of some kind of trunk, but it was once suggested that they actually used them as some kind of snorkel.

The South American genus, which seems to have died out for good around 10,000 years ago and has no living descendants, has been basically without a family since its discovery. In 2015, a study of the proteins inside the ancient bones suggested a close kinship to perissodactyla, an order of “odd-toed ungulates” that includes tapirs, rhinoceroses, horses and their ilk. According to that analysis, Macrauchenia had branched off from the lineage of any surviving ungulates about 60 million years or so. But while the study of proteins allowed scientists to infer what the animals’ DNA might have looked like—proteins are, after all, created under the instruction of the genes carried by our DNA—paleontologists were unable to get at the DNA itself. Until now.

In a study published Tuesday in Nature Communications, an international team of researchers announced success in tracing out the genetic history of the unusual ungulates. And it took some creative thinking. Ancient DNA is difficult to study because DNA degrades quickly (especially in warm, wet environments like South America), so scientists have to piece together a fossil’s genetic code using whatever clues are still around. Even mitochondrial DNA, which is passed down directly from mother to child, stored in the power house of the cell, and generally more resilient than the DNA kept in the nucleus, is quickly degraded by the ravages of time.

“We had a difficult problem to solve here: Macrauchenia doesn’t have any really close living relatives,” lead author Mick Westbury from the University of Potsdam said in a statement. “Because ancient DNA is so degraded and full of unwanted environmental DNA, we rely on being able to use the genomes of close relatives as a kind of scaffold to reconstruct fossil sequences. For this study, we devised a new approach involving iterative mapping that relies on using very strict parameters and the mitochondrial genomes of a number of living species as multiple reference points to more reliably predict the fossil’s most likely genetic sequences.”

In other words, they analyzed the genome by comparing it to a bunch of known genomes over and over, guiding the DNA fragments they did have into their most likely complete form. They were able to recover 80 percent of the mitochondrial DNA from one of the fossils they studied, which allowed them to confidently map its relationship to living animals. Lo and behold, they also concluded that Macrauchenia was most closely related to perissodactyla, though it wasn’t actually in the same lineage as any of the creatures alive in that group today. And their estimate of when the extinct weirdos diverges from the modern weirdos—about 66 million years ago—lines up with the findings of the protein study as well. The techniques used in both of these studies are pretty new, so the fact that they came to the same conclusion does a lot to support their findings.

The study authors note that their estimation puts the divergence of Macrauchenia right smack dab in the middle of the mass extinction event that killed off most dinosaurs—a period when mammals were suddenly able to thrive and evolve to fill newly empty ecological niches—but they don’t necessarily think that these trunked animals have dinosaur death to thank for their existence.

“While the coincidence with the extinction of nonavian dinosaurs was not lost on us, molecular clock dating is more like a sundial than a digital watch—it’s just not that precise,” study author Ross MacPhee, a mammalogist and curator at the American Museum of Natural History, said in a statement. “While fossils certainly support the idea that the modern orders of placental mammals really began to diversify around this time, molecular evidence suggests that their broader relationships go back into the late Mesozoic, before the big die-off. The deep lineages that make up Panperissodactyla are certainly consistent with this idea, but we need to find the fossils to document it.”

But the team has even stranger beasts on their to-do list (if you ask Darwin, anyway). They hope to use the same technique to confirm the history of Toxodon, another South American genus that Darwin called the “strangest animal ever discovered.” Scientists think it looked something like a furry hippo with a rhino-like head.