Also reveals that he was at risk for ulcers 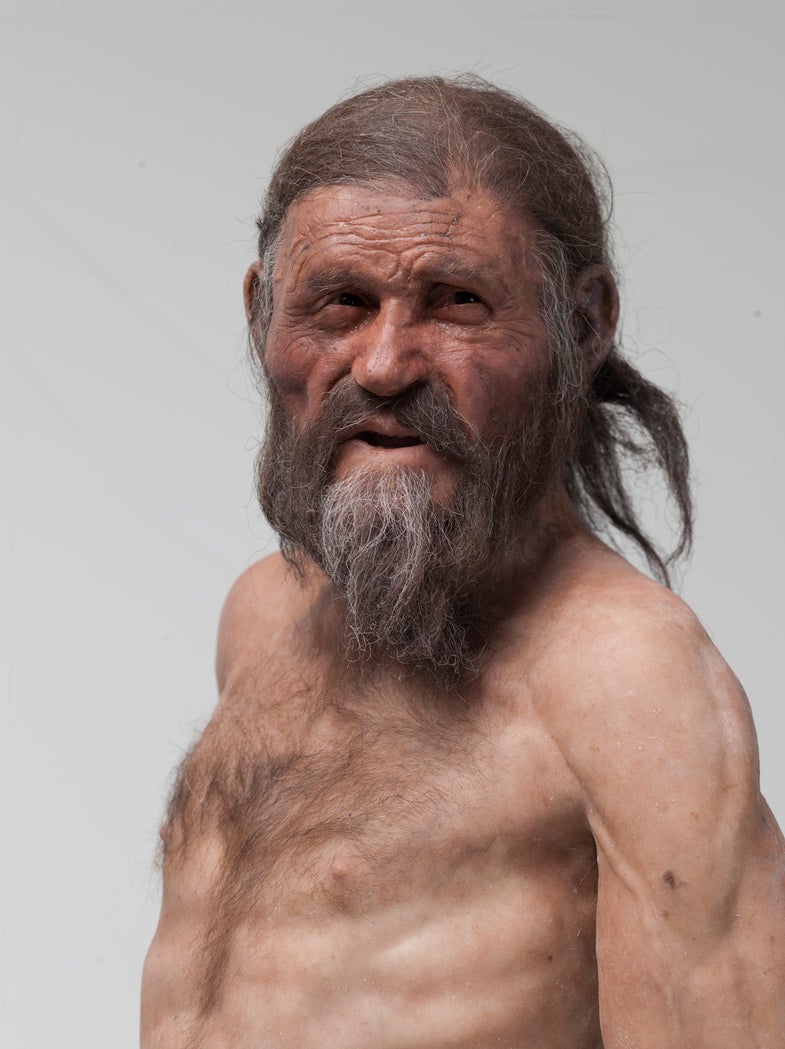 Some 5,300 years ago, high in the Italian Alps, an ancient crime scene unfolded. Having fled high up into the mountains from mystery attackers, a man, aged 40 or 50 years—quite old for the time—was shot through the shoulder with an arrow. The sharpened stone arrowhead lacerated his subclavian artery and he bled out, dying within minutes. Slowly his body folded into the sides of the glacier under blankets of snow and ice. There it remained until many millennia later, in 1991, when two Austrian mountaineers stumbled upon his preserved, mummified body.

The Iceman, otherwise known as Ötzi, is perhaps the most intensively studied mummy ever. Everything about him, his insides and his outsides, has been explored. The poor man has been x-rayed, poked, prodded, inspected, incised, and more. He’s one of the few individuals to have their genome sequenced in tremendous detail. But just when it seems that he’s given up all his secrets, he reveals another.

Microbiologist Frank Maixner of the Institute for Mummies and the Iceman in Bolzano, Italy, and an international team of scientists have recently discovered and sequenced the DNA of an extinct strain of gut bacteria, scooped from the inside the Iceman. Helicobacter pylori, however, is no run-of-the-mill gut microbe, and the strain found in Ötzi offers tantalizing clues about the geography and migratory paths taken by early humans.

The findings were published today in the journal Science.

Helicobacter pylori: What is it?

Nestled on the acidic walls of half of the human stomachs on Earth is H. pylori. The bacterium has evolved with Homo sapiens for at least 100,000 years to become specifically attuned to the acidic environments of the human stomach. It was present in the first modern humans to walk out of Africa and has since followed a near identical geographic distribution around the globe. Its evolutionary history is so intertwined with that of humans that the pattern of H. pylori distribution and its many strains matches the pattern of language distribution. As a result, H. pylori has become a marker of the history of human migration and dispersal around the world. 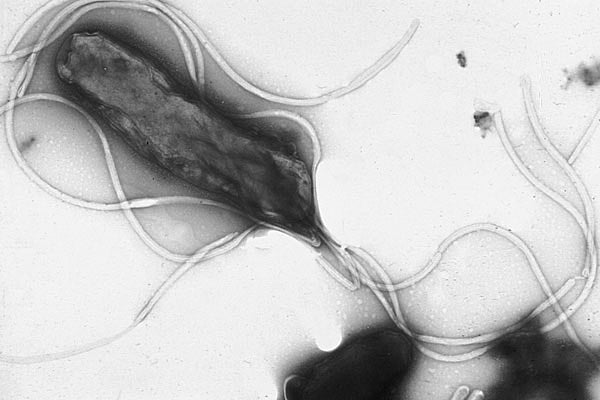 Helicobacter pylori is transmitted between parents and their offspring, but it is also transmitted between individuals, particularly children. Ecologist Yoshan Moodley of the University of Venda, South Africa, and co-author of the study, noted that “human sanitary conditions over the last hundred thousand years were not anywhere near what they are now, neither were antibiotics, so kids playing in the dirt, eating dirt, giving each other dirt to eat… This is exactly how it spreads.”

H. pylori is not particularly beneficial (although it could be important in overall gut ecology), but it rarely is harmful. At least in the modern age. Of the 50 percent of humans that carry it, only 10 percent develop a disease that causes ulcers or gastric cancer. Unfortunately for the Iceman, the now extinct strain of H. pylori that he carried was virulent, and showed signs of having caused an inflammatory response from his body.

Add it to the list of his ailments. At the time of his murder, he had generative arthritis in his legs and back, healed rib fractures, wounds to his hand (possibly from a previous attack), vascular calcification (i.e. eventual heart attack), and was apparently lactose intolerant.

How Did They Find The H. pylori ?

To get inside the Iceman’s stomach, the team first had to unthaw him. He normally rests in the South Tyrol Museum of Archaeology in Bolzano, Italy, at a balmy 20 degrees Fahrenheit with a 98 percent humidity. Co-author Albert Zink, who works at the museum, remarked that “the first challenge of the project was obtaining samples from the Iceman’s stomach without doing any damage to the mummy.” Once thawed, the scientists performed the sweat-inducing procedure of carefully reaching inside his body through an incision from a previous investigation and successfully scooping material out of Ötzi’s desiccated stomach. 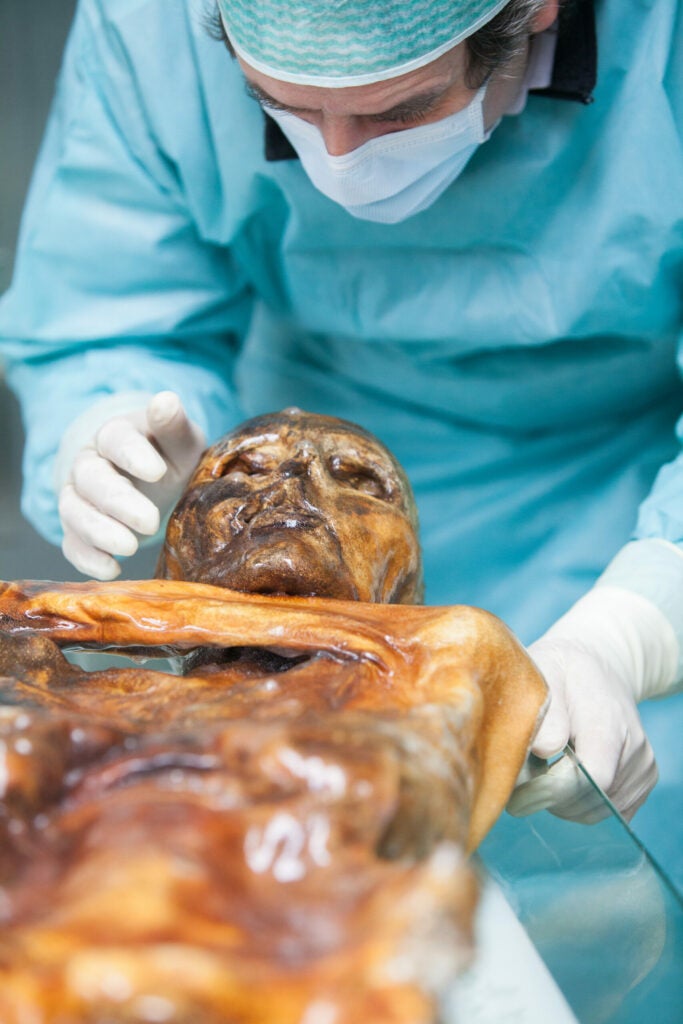 To find the H. pylori, the researchers took a bird shot approach—known as metagenomics—by collecting DNA samples from everything that was in the Iceman’s stomach. Unfortunately that generated several hundred gigabytes of data, so separating out the H. pylori was a tall order.

“Separating the Helicobacter pylori sequences from all other genetic material–food, microbiome, other pathogens and soil bacteria–was like searching a needle in a haystack,” says Thomas Rattei, a bioinformatician from the University of Austria and co-author of the study. But find it they did, and the bacteria’s genome contained a surprise. Instead of being like the modern European strain of H. pylori, Iceman’s stomach bug was more closely related to one currently found in Northern India.

What Does It All Mean?

The strain of Helicobacter pylori found in modern day Europe is a hybrid of two other strains, one from North Africa, and one that at the time stretched through Central Asia and Western Europe, but nowadays only resides in Northern India. Initially, scientists had guessed that this admixture probably occurred in Paleolithic times, anywhere from 10,000 to 52,000 years ago during migrations into Europe after the last ice age. Well, this finding in Ötzi’s gut suggests that’s not the case.

Iceman’s H. pylori is more similar to the Eurasian strain–the one that’s now only found in Northern India–and the fact that it’s not mixed with the North African strain implies that that massive waves of migration into Europe occurred sometime after Ötzi died 5,300 years ago. The ancestors of modern Europeans were still living in Europe during Ötzi’s time, but their numbers were sparse.

Where Do We Go From Here?

One of the biggest findings of this study, perhaps lost in all the revelations of early human migrations, is the fact that this particular type of study is even possible. From the shriveled guts of a preserved ancient human, a team of scientists were able to piece together the genome of an ancient microbe. A microbe that can unlock a trove of secrets regarding the formation of Homo sapiens.

“The almost complete sequence of the [ancient H. pylori] genome is unique and extremely valuable,” explains Rattei. “It gives an idea of what we can expect from the emerging field of paleomicrobiology in the future.” With this process, adds Zink, they can investigate preserved mummies from other parts of the world—South America, Asia, bog mummies of Europe, and even Siberia. (The mummies of Egypt were embalmed, i.e. had their organs removed, so would not yield any H. pylori.) 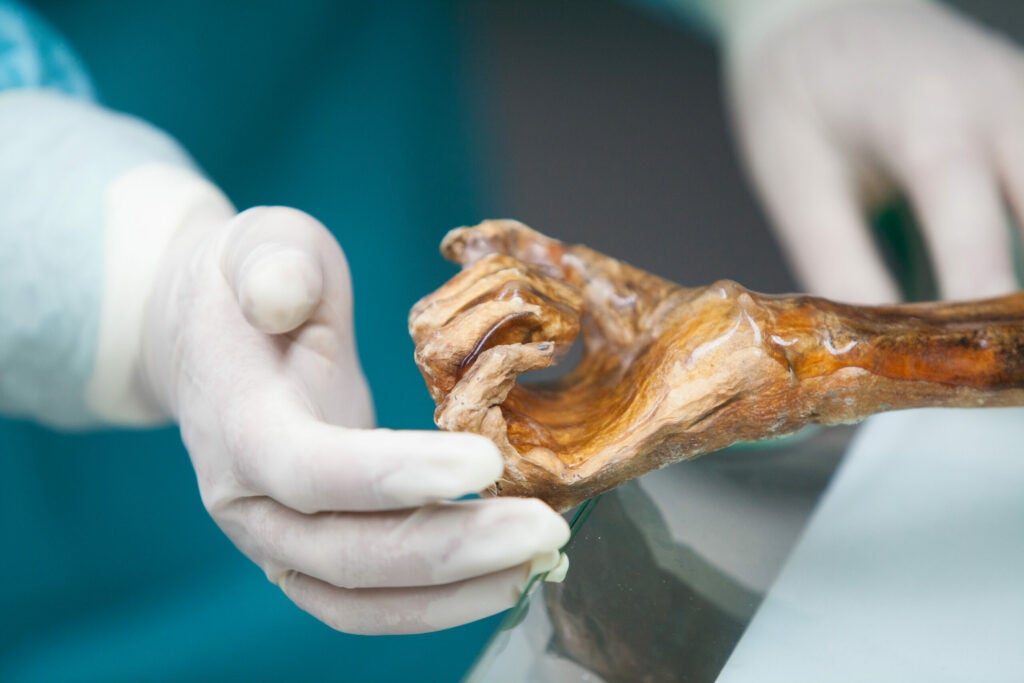 By scraping H. pylori from the wizened guts of ancient humanity, we can trace the path of modern human evolution and maybe even unlock secrets of human health relevant to people today. What H. pylori‘s gastric journey can tell us about ourselves seems wide open at this point. And perhaps, through H. pylori and other gut bacteria, the other mummies of the world will be able to divulge as much of their story to us as the Iceman has.