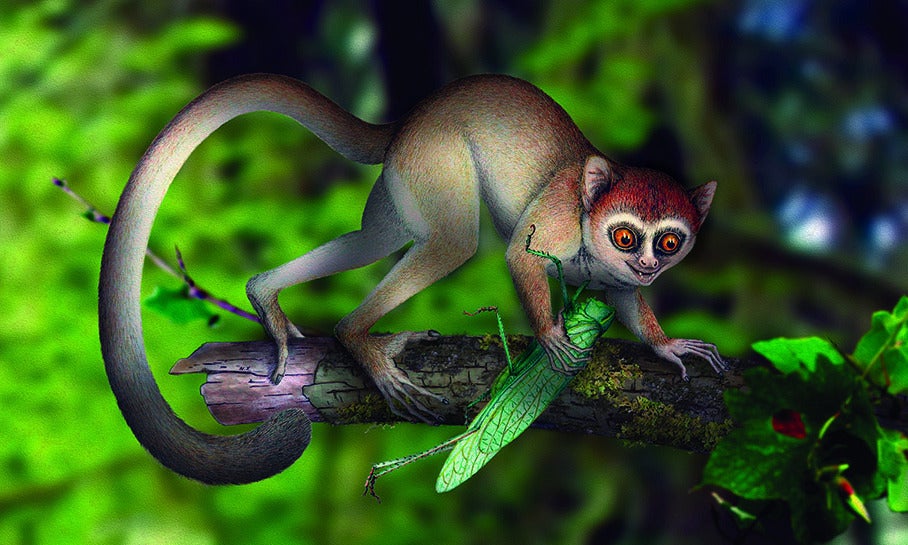 A tiny, beady-eyed, long-tailed primate with hand-like feet is now the world’s oldest known fossil primate skeleton. In a study to be released in the journal Nature this week, an international team of researchers describe their discovery of the Archicebus achilles and how it’s adding to what we understand about our own evolution.

The _Archicebus achilles_–named for its long tail and strange feet–was found in an ancient lakebed in China. The lack of oxygen at the bottom of the lake means that this specimen is remarkably complete and well-preserved. Recovered from sedimentary rock strata deposited in an ancient lake roughly 55 million years ago, this fossil is the oldest primate fossil, beating the previous record-holders–including Darwinius from Messel in Germany and Notharctus from the Bridger Basin in Wyoming –by 7 million years.

“It’s not just that it’s the oldest primate, but it turns out that this fossil tells us that primates had already been evolving for quite some time. This primate was already fairly advanced in terms of the evolutionary tree,” says Christopher Beard, a coauthor of the study and paleontologist from the Carnegie Museum of Natural History. 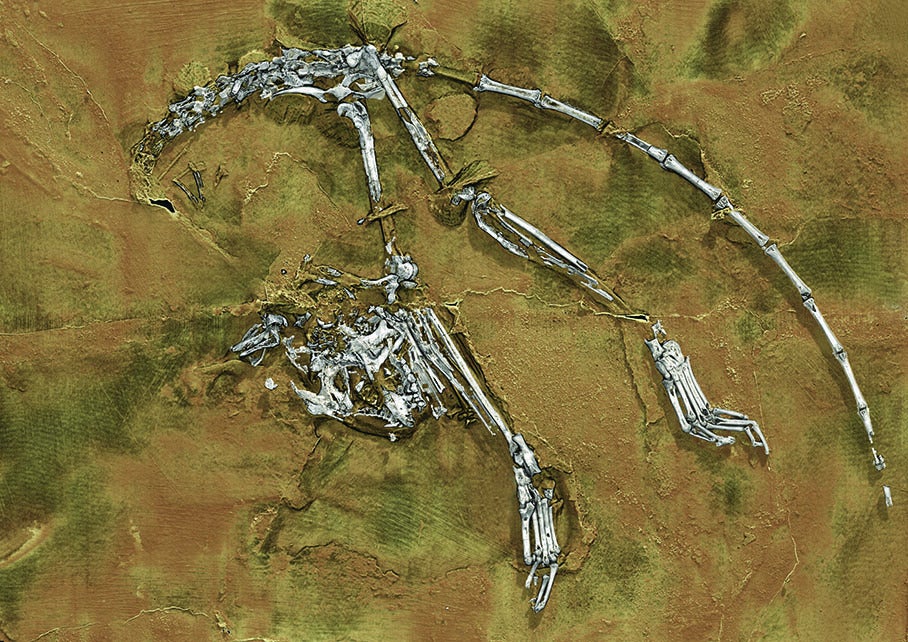 A 3-D computer graphic image of the skeleton of Archicebus achilles above a background photo of the fossil.

The Archicebus sits at a branch of the evolutionary tree, which goes in two directions: one toward living tarsiers—large-eyed night-dwelling small primates—and anthropoids, the monkeys, apes and humans, which have smaller eyes and are most active during the day.

This is the first time that we have had such a complete picture of the divergence between these two branches.

“Any time you find a specimen like this, it’s a bit special. It’s adding a lot of depth of history,” says John Flynn, another coauthor and curator for the American Museum of Natural History.

Given Archicebus‘s size—weighing about an ounce and measuring 7 to 9 inches long including the tail—and its basal evolutionary position, this discover supports the idea that the common ancestor of both tarsiers and anthropoids were quite small. These two branches, anthropoids and tarsiers, have been thought to be evolutionarily linked for some time, and now scientists are starting to understand the age of that split.

Beyond its addition to our understanding of evolution, the ancient primate is also unique in its physique. One of the most curious characteristics of the Archicebus is its feet. Tarsiers tend to have elongated heel bones, which help give them leverage for their giant leaps. Anthropoids have feet specially designed for grasping—though humans are a bit of a special case, given our unique disposition of walking bipedally.

“I was convinced pretty early on by the foot of this creature, which looked like nothing else but a little marmoset, which is a type of monkey from South America. I was convinced this thing was going to be a very primitive anthropoid,” Beard says. “Here’s an animal that combines features that we’ve just never seen before in one fossil primate.”

But after the exhaustive analysis, it became clear that Archicebus was also closely linked to tarsiers.

To fully analyze the fragile fossil, researchers collaborated with the European Synchrotron Radiation Facility in Grenoble, France. Using a high-intensity X-ray beam, the Synchrotron scanned the fossil, producing high-resolution data. This data was then rendered into 3-D versions to be analyzed and compared with other primates, both living and fossilized.

The analysis and data-gathering was one of the longest and most extensive phases of the study. Researchers created a matrix that included data from more than 150 species and more than 2,000 different characteristics. All told, the process took 10 years and required collaboration from many institutions internationally. But the patience and practice is now finally paying off.

“[The Archicebus is like] what we find so often in paleontology, but we can never predict it, and that’s an animal that’s unlike everything else we’ve ever seen,” Beard says. “It’s a kind of hybrid or mosaic of different features that are found in different animals today, but never together in one. It’s truly a unique creature.”