I squeezed through a 7-inch passage to find ancient humans

Excavating a long-hidden cemetery in a cave. 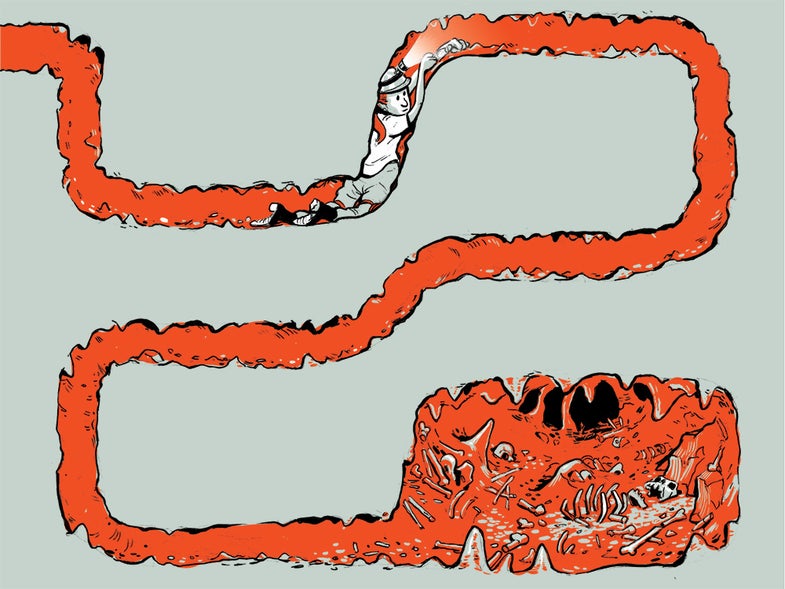 ↑ Marina Elliott, biological anthropologist at University of the Witwatersrand in South Africa

In 2013, I was finishing my doctorate in biological anthropology when my supervisor sent me an intriguing Facebook post. Paleo­anthropologist Lee Berger was seeking a team to excavate hominin remains in South Africa’s Rising Star Cave, a network of chambers that covers slightly more than 9 acres. He wanted people who were not only trained anthropologists, but also climbers who could squeeze through a 7-inch-wide space. I wriggled underneath my bed to make sure I could do it. Within a month, I was heading to South Africa with five other researchers.

To reach the fossils, you belly-crawl through a roughly foot-high passage, climb about 50 feet up a rocky formation, and slip down a narrow 40-foot chute into what we call the ­Dinaledi Chamber. That chute isn’t just a crack in the rock—it’s studded with pointy pieces like shark teeth. I couldn’t turn my head to see where I was going, and many points were so tight that by inhaling, I could hold myself in place without my hands. You need to be savvy to not freak out.

When I dropped down and entered the chamber for the first time, it was awesome in the true sense of the word. Everywhere my headlamp shone, I saw fragments of bone. We expected to find a single individual, probably a species we ­already knew. But there were 18 hominins, each around 300,000 years old. We later learned those remains came from a previously unknown human cousin, Homo naledi. We believe this ­species deliberately disposed of their dead there.

I expected to spend a month in South Africa, but five years later, I’m still working on the site. The descent never gets easy—I’ve probably worn through 15 overalls scraping through that jagged chute—but negotiating tight spaces is more about knowing how to move than anything else. You need to be strong, smart, and determined (and a little bit crazy), but not necessarily tiny.

As told to Rachel Feltman