Are People Getting Dumber? One Geneticist Thinks So

A Stanford geneticist says humans have so many genetic mutations that we're less intelligent than our ancestors, and it's getting worse. Eugenicists 100 years ago had similar hypotheses. 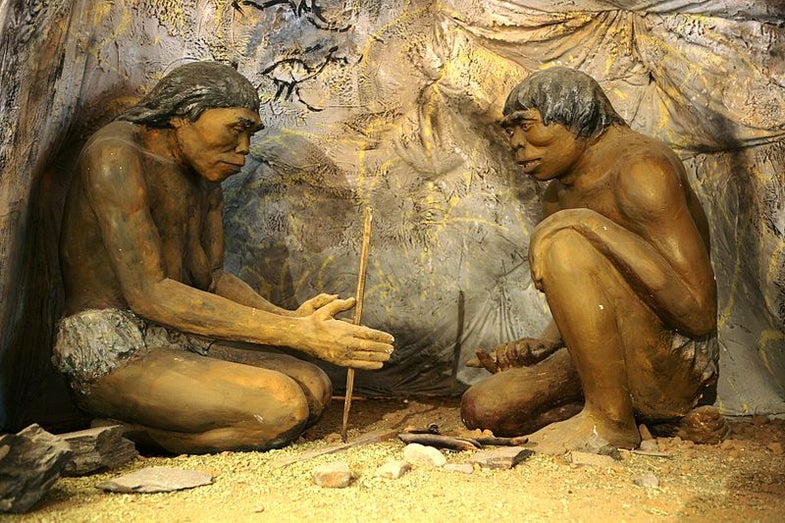 There’s this great recurring “Saturday Night Live” skit from several years back where Phil Hartman plays an unfrozen caveman who goes to law school. He pontificates on the American judicial system while marveling at modern technology like “the tiny people in the magic box” (a TV). It fits a common stereotype: Human ancestors were, well, cavemen, and not as smart as we are today. A provocative new hypothesis from a Stanford geneticist tries to turn this stereotype upside down.

Human intelligence may have actually peaked before our ancient predecessors ever left Africa, Gerald Crabtree writes in two new journal articles. Genetic mutations during the past several millennia are causing a decline in overall human intellectual and emotional fitness, he says. Evolutionary pressure no longer favors intellect, so the problem is getting exponentially worse. He is careful to say that this is taking quite a long time, so it’s not like your grandparents are paragons of brilliance while your children will be cavemen rivaling Hartman’s SNL character. But he does posit that an ancient Athenian, plucked from 1000 BC, would be “among the brightest and most intellectually alive of our colleagues and companions.”

His central thesis is that each generation produces deleterious mutations, so down the line of human history, our intelligence is ever more impaired compared to that of our predecessors.

Not surprisingly, the hypothesis, published in the prominent journal Trends in Genetics, has several geneticists scratching their heads.

“It takes thousands and thousands of genes to build a human brain, and mutations in any one of those can impair that process, that’s absolutely true. And it’s also true that with each new generation, new mutations arise … but Crabtree ignores the other side of the equation, which is selection,” said Kevin Mitchell, associate professor at the Smurfit Institute of Genetics at Trinity College Dublin, who operates the blog Wiring the Brain. “Natural selection is incredibly powerful, and it definitely has the ability to weed out new mutations that significantly impair intellectual ability. There are various aspects in these papers that I think are really just thinking about things in a wrong way.”

Crabtree said he wanted to examine the cumulative effect of generation-to-generation mutation on intelligence, which is thought to be controlled by many genes. Using indices that measure X-chromosome-related mental retardation, he comes up with between 2,000 and 5,000 genes related to human intellectual ability. Using another index measuring average mutations that arise in each generation of children, he calculates that within 3,000 years, “we have all sustained two or more mutations harmful to our intellectual or emotional stability.”

“There is a general feeling that evolution constantly improves us, but it only does that if there is selection applied,” Crabtree said in an interview. “In this case, it is questionable about how much selection is occurring now compared to the process of optimizing those genes, which occurred in the jungles of Africa 500,000 years ago.”

There’s already evidence for this in other areas, he argues: Take our sense of smell. Humans have far fewer olfactory receptors than other animals, he said–we’re guided by our intellect now, not by smell. We can think about where a piece of food came from, how it was processed, which plant it’s from, who has been around it, and so on. A dog, on the other hand, simply sniffs something and either eats it or doesn’t.

“Once you place pressure on intellectual abilities, and take it off of olfactory abilities, the olfactory genes deteriorate,” Crabtree said.

Similarly, he believes evolution now selects for other traits–namely, the most healthy and the most immune, not the most intelligent. Human movement into communities and cities increased the spread of infectious diseases, and those with the strongest physical constitutions survived to pass on their genes, he argues. He said he wanted to publish this hypotheses because geneticists can test for this, in an expensive process that requires saving some genetic information that typically gets discarded.

But geneticists took issue with his claims, not to mention his citations and methods. Mitchell took issue mostly with Crabtree’s characterization of genes–he describes them as links in a chain, with incredible overall disruptive power. They’re like a bulb on a string of Christmas tree lights that conks out, taking out the entire strand with it: “It can be concluded that [genes related to intelligence] do not operate as a robust network, but rather as links in a chain, failure of any one of which leads to intellectual disability,” he writes. Mitchell countered that this ignores other genes that don’t cause intellectual disability.

“Biological systems are robust to degradation of several different components,” Mitchell said. “Evolution has gone to a lot of trouble to craft your genome so it’s finely honed to do its job, and it doesn’t make sense that you would have all this random mutation in your brain cells. Also, you would have a very high rate of brain cancer.”

Mitchell went on to say that it’s true, mutations can lower intelligence– “It’s just, I don’t think, true that the mutational load in the species accumulates over time, because selection weeds out the serious ones. That’s the real distinction that I think gets lost here,” he said. “There’s a conceptual fallacy to his argument, that in effect makes it trivial as opposed to controversial.” 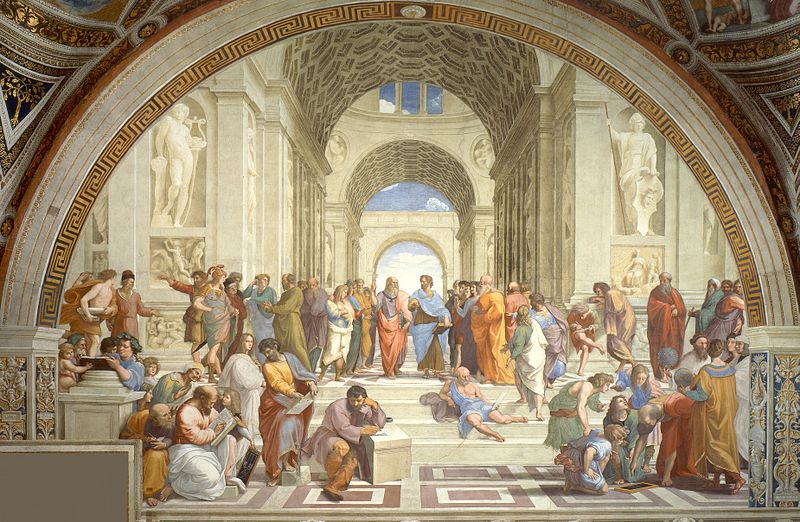 The School of Athens

Would these people be smarter than all of us today?

Other geneticists were somewhat less magnanimous in their disagreement. Steve Jones, a geneticist at University College London, called the papers “arts faculty science” in an interview with The Independent. “Never mind the hypothesis, give me the data, and there aren’t any,” Jones is quoted saying. “I could just as well argue that mutations have reduced our aggression, our depression and our penis length, but no journal would publish that. Why do they publish this?”

Crabtree, for his part, said he was surprised at the reaction. He flew to Hawaii on a long-scheduled vacation the day after Stanford publicized his papers, but seemed bemused by some of the responses when I reached him at his hotel.

Perhaps another reason why this paper is getting so much attention is the connection it shares to eugenics. For some context, I turned to Nathaniel Comfort, a historian of medicine at Johns Hopkins University. Comfort’s recently published book, “The Science of Human Perfection: How Genes Became the Heart of American Medicine,” tackles this subject.

“The notion of the degeneration of our intellect and our mental faculty is a strong theme through much of the history of medical genetics,” he said in an interview. The difference is that the early eugenicists had a more simplistic understanding of biology, he said.

Karl Pearson, a renowned statistician and eugenicist, said in a famous 1903 lecture that Britain was “ceasing as a nation to breed intelligence,” according to In the Name of Eugenics: Genetics and the Uses of Human Heredity by Yale history professor Daniel Kevles. Britain suffered “a dearth of national ability,” evidenced by the lack of any Britons inventing airplanes or automobiles. This was a result of lower, “unfit” segments of the population contributing a disproportionate supply of offspring, Pearson argued. He believed intelligence could not be taught or earned, but merely inherited. Natural selection, he argued, had been replaced by “reproductive selection,” in which evolutionary winners were “the most fertile, not the most fit,” Pearson said.

Comfort said he was intrigued by the similarities in the arguments–from a biological perspective–of Crabtree and early 20th century psychologists like Henry Goddard. Goddard, a prominent psychologist and eugenicist, argued human intelligence was fragile because it stemmed from a single dominant gene. In the new papers, Crabtree argues it’s fragile because it stems from thousands of genes, a disruption in any of which can be detrimental.

“I think there are some serious flaws in the reasoning of that, that it’s a chain, rather than a network,” said Comfort, while noting that he’s not a geneticist. “That seems like an enormous leap. When you’re a historian like I am and you see big leaps like that, and scientific evidence isn’t driving that leap, then something else is. Your politics, your worldview, etc. those are the questions that I start asking about.”

Comfort said historical evidence shows non-scientific impulses can drive the way we look at ourselves.

“Science is never completely value-free. Some science is more value-laden than others–climatology is more laden than particle physics–but something like the genetics of intelligence, and the notion of a deteriorating intelligence, is down toward the value-laden end of the spectrum,” he said. “As a historian, I would say there is no way to talk about it without politics and social issues clouding it. I think they necessarily do. When we choose to describe something like intelligence in terms of the number of genes that determine it, we’re making a social and political choice about what kinds of things matter.”

Crabtree said the argument doesn’t have to wade into eugenics, however; if there is a problem stemming from our declining intellects, it’ll solve itself.

“I think within hundreds of years, we will have ethical and morally acceptable solutions to these problems, if it is a problem. It will never be an issue that needs to be looked at from the standpoint of eugenics; it’s simply a matter of moving along, moving forward,” he said. “I think probably we will be able to deliberately correct any mutations that occur, quite easily, and the day will come when we won’t even hardly think about this. One doesn’t need to be concerned.”

“Global warming is a concern,” he continued. “This is more or less a playground for curious minds.”