All the taste, but way more fruit. 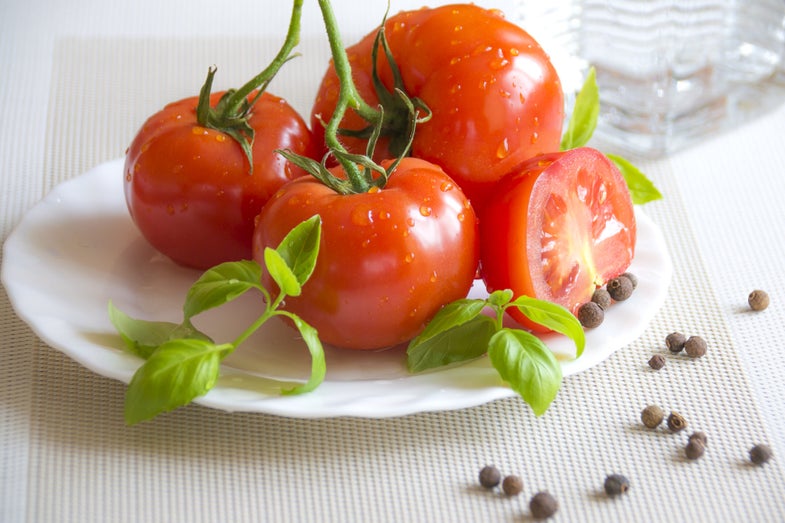 In genetics, sometimes one plus one equals zero. Genes that should work in concert with each other, each magnifying the other’s effects, can in occasionally cancel each other out instead. A study released Thursday in the journal Cell Press looks at the genetic mutation that gave us the modern, domesticated tomato, shedding some light on how these cancellations happen —and how we can use them to create a more productive tomato.

Modern tomatoes are the result of a mutation that likely arose with the spread of agriculture some eight to ten thousand years ago. Ancient tomatoes were smaller, darker, and more berry-like. The mutation allowed for the development of larger fruits that would lead to the voluminous tomatoes that we’re familiar with today. Basically all tomatoes—even the heirloom varieties—have this mutation.

In the 1950s a second mutation, called “jointless”, was discovered in the mmm mmm good fields of the Campbell’s Soup Company. The mutant attracted attention because it eliminated an elbow-like bend in the stem leading to the tomato. This had two benefits. First, a tomato with this mutation would be less likely to break off and fall to the ground where it could be bruised, or rot and thus made inedible. Secondly, it would make it easier to harvest tomatoes with mechanical pickers.

If breeders could merge tomatoes with the jointless mutations with the earlier mutations that allowed for big, bountiful tomatoes, they figured they’d end up with a more productive tomato plant.

But when breeders merged the two, they did not get the big, beautiful tomatoes with seamless joints they expected. Rather, the union created a plant that lacked joints, yes, but with a lot more branches and flowers—far more than the plant had the energy to turn into fruit. The end result was fewer tomatoes.

“The genes that determine traits are quite frequently members of gene families that in a normal plant are working together, moving towards their trait determination,” says study author Zachary Lippman, a plant biologist at Cold Spring Harbor Laboratory. If you have a mutation in one gene that affects growth and development of a trait, a second mutation can arise that contributes to that same trait. Instead of improving the trait, however, it makes it worse.

The influence that genes have on each other is known as epistasis. This sort of canceling out that Lippman is describing, which was on display when the jointless tomato merged with the original tomatoes, is known as negative epistasis—and it’s not limited to tomatoes.

“There’s some great examples from back in the twenties and thirties where people would cross tobacco plants to make new hybrid varieties,” says Lippman. “The hybrids, instead of showing a vigor effect which is typically what you expect and hope for when you make hybrids, they actually saw an autoimmune response. The plants would start to wither and die basically as if they were being attacked by some pathogen when they weren’t being attacked.”

Although breeders were eventually able to marry the two tomato mutants, it was a relatively haphazard affair. By studying the underlying genetic relationship between branching and flowering, Lippman and his team hoped to better understand why this canceling out effect occurred, and potentially produce a tomato that was a little bit more balanced. That is, one that would branch a little bit, creating a few more flowers, but not so many that it would overburden the plant.

And that’s exactly what they were able to do.

Think of each gene as a dose. In order to get normal branching, you need to have four doses of the two genes: one dose coming from each copy of the gene, because there’s two copies of each gene in tomato DNA. But if you have two mutants working together, they essentially cancel out those doses. It’s like the tomato plant effectively doesn’t have any copies of the gene.

“If you lose all four doses by having mutations in both genes, you have this negative epistasis and you have too many flowers and you have fertility issues,” says Lippman. “But what you only have a loss of one dose, now you’re still going to make branched flowering shoots, but because you still have three doses of the gene it’s not going to be as bad as when you lose all four doses.”

You can get to three doses by making crosses between mutant plants, but you have to know the underlying genetics and how the genes work together. The closest analogy is to cooking: if you understand a foods general flavor properties you’ll understand which flavors work together, and which cancel each other out. By studying the underlying genetics of the tomatoes, Lippman was able to understand the properties of the two mutant genes, and create a more productive tomato.

Lippman believes that this kind of negative epistasis isn’t just happening in tomatoes, and that as we go digging we’ll discover more surprising cases.