The annual Ig Nobel awards are a treasure. 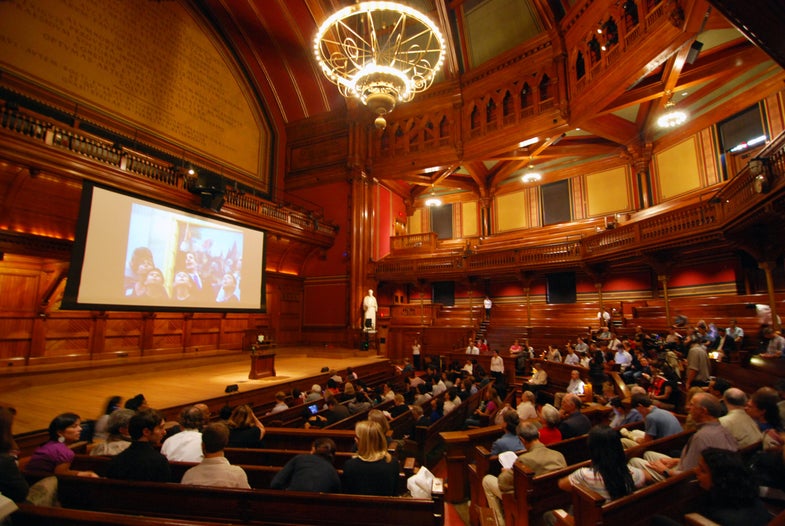 The annual Ig Nobel awards, given for real scientific research that also makes you laugh, are a festival of hilarity. Prior winners have included a doctor who cracked only the knuckles on one hand to test whether it caused arthritis (it didn’t), an entomologist who voluntarily got stung by insects in order to create a pain index for them, and two researchers who explained why woodpeckers don’t get headaches.

It’s silly, yes, but it’s also a wonderful celebration of the essence of science. It’s purely about discovery and learning, and the joys of investigating questions. Some of the research is just for fun (though it’s still published in academic journals), but some of it also serves some greater purpose.

In that spirit, we rounded up the 2018 winners and explain why the heck you’d want to know this stuff:

The research: Mitchell and Wartinger took a biologically accurate model of a kidney (or at least the parts that matter for passing a kidney stone) modeled on a particular patient, inserted three stones of varying sizes that the patient in question had passed, and suspended it all in urine. They then took this contraption on a roller coaster that lasted 2 minutes and 30 seconds (with no inversions, but several sharp turns and drops) to see whether the motion would dislodge the stones. They did this 20 times (and all, it should be noted, with the permission of the Guest Services team at Walt Disney World’s Magic Kingdom).

It turns out that sitting in the rear car did kind of help the kidney stones get moving, though they note people with large kidney stones probably won’t benefit. They also note that regular roller coaster riding could genuinely help those who have already passed a stone, as it would facilitate the movement of microscopic stones before they can build up.

The why: More than 300,000 people go to the emergency room every year with kidney stones, which are (anecdotally) one of the most painful experiences a human can have. Maybe if we all rode more roller coasters we’d have fewer problems. These two originally got the idea because of reports of spontaneous kidney stone passage on roller coasters and while bungee jumping, so it’s not so crazy.

Anthropology: Chimps and humans imitate one another about as often, and about as well

The research: These cognitive scientists went to their local zoo (the Furuvik Zoo/Lund University Primate Research Station in Sweden) and watched a group of five chimpanzees to monitor how often humans imitated them and then how often the chimps imitated the humans back. After 52 total hours, they found that both species imitate each other about as often—and about as accurately—as the other.

The why: Imitation is an important way for young humans to learn, as any parent of a toddler can tell you. Apes are known to imitate, but not necessarily in a social context—they may learn how to eat certain fruits by imitating another chimp, they just haven’t been known to imitate for social or communication purposes. The authors wanted to test whether that was really true, since it indicates an important aspect of how an ape mind might be like ours.

Biology: Wine experts can identify a fly in a glass of vino just by smell

The research: A bunch of fly researchers realized that, since only female Drosophila melanogaster produce the pheromone Z4-11AI, they could distinguish the males from the females just by sniffing them. They wanted to know whether other experts could do the same, and so asked a panel of eight wine aficionados to smell some glasses that had previously contained a fly (marinating time: five minutes) of one sex or another. Apparently, these folks can also distinguish the differences between male and female fly scent.

The why: Lots of animals communicate with smells, both within and between species. Maybe fly scent tells humans something—we can’t know unless we know whether we can detect it. This particular pheromone is part of the blend of chemicals that make up the characteristic clementine scent, and D. melanogaster loves citrus fruits. Perhaps this family of odors is also related to mating or social signals. Or perhaps not. But at least now we know we can tell a lady fly from a dude.

The research: These researchers decided to test whether spit-cleaning was really effective, but rather than test it on household items they went for 18th-century gilded sculptures (we explain why below). Since saliva contains amylase, an enzyme that breaks down starches, it turns out to be quite an effective cleaning agent.

The why: Conservators have apparently been cleaning old paintings and statues with their own spit for years. They’ve always found that it can clean an artifact without breaking it down, and these conservation scientists wanted to test whether that was actually true.

Medical Education: You can totally give yourself a colonoscopy

The research: A gastroenterologist took it upon himself, literally, to see whether you can give yourself a colonoscopy using new, smaller-diameter endoscopes. He found that it was totally possible by holding the controller knob in his left hand and the tube in his right. On his four attempts, it took him 4, 5, 3.5, and 4 minutes to complete the procedure. He noted, however, that you’d probably need a special chair to facilitate the process.

The why: There’s apparently something of a stigma against getting colonoscopies in Japan, and Horiuchi reasoned that if you could give yourself one you might be more willing to get one. Given that colonoscopies are highly effective at preventing colon cancer, this might actually save lives. Colon cancer begins as a benign polyp that is easily observable on camera (that’s why colonoscopies are effective), and though we’d needwe’dneed to train people how to do this without perforating their own intestines, it might just work.

Literature: Nobody reads the manual

The research: It may seem obvious to you, but apparently the people who write manuals weren’t sure—no one had ever bothered to study it. These researchers not only confirmed that no one really reads manuals for new products, they did an in-depth investigation as to the various reasons why. You should read the (very long) study if you’re curious, but one of the more interesting highlights is that not only do people find manuals overwhelming and confusing, they think that they shouldn’t need to read the manual. A product should be well-designed enough that the owner doesn’t require written instructions on how to use it.

The why: Silly as it may seem to you, those responsible for designing manuals should be informed as to the potential challenges associated with them. If all these people are just writing manuals for no one, we should maybe rethink how to best inform consumers of various risks and instructions.

The research: Cole found nutritional compositions for every part of the body, from the liver to the muscle, and worked out how well a human body would fit into a proper diet. Turns out, it wouldn’t. Humans may have a similar nutrient profile than other mammals of our size, but we contain significantly fewer calories than the large mammals that Paleoliths would have had access to. It’s worth noting that the values he found were only for adult males, as he writes that “data for females and sub-adults are not available within the published literature, and the collection of primary data of this nature was outside the ethical (and legal) scope of this study.”

The why: Some of our paleolithic ancestors were occasional cannibals. The question was why. Maybe human meat is good for you, and would thus have been a valuable source of nutrients in an era when you had to literally fight for all your food. Cole notes that there were clearly other reasons to eat other humans back then, including ritual practices and just “meat for meat’s sake.”

Peace: People have a lot of road rage, but the reasons and effects vary

The research: This paper measures the frequency, motivation, and effects of shouting and cursing while driving a car. You may be extremely familiar with this kind of behavior, but as with a lot of common experiences, it’s been little studied. Some Spanish researchers decided to survey drivers to see why they were so angry and what could help them be less aggressive.

The why: More than a million people die in traffic accidents every year, and some of those are certainly due to aggressive driving. Perhaps if we understood more about why people drive angry, we could prevent it. For instance, these researchers found that drivers were more likely to have road rage in urban settings because they were following behavior that has been deemed acceptable. (They should also win a prize for science that confirms the obvious).

The research: By creating a ring of stamps around the base of 22 potent men and 11 impotent men, these researchers were able to find a way to test whether their subjects had experienced nocturnal erections. These particular stamps had perforations holding the strip together, and so easily break apart when enough strain is applied. It turns out the force exerted by an engorged penis is enough to break the performations (seven of the men woke up from the sensation of the snapping ring), and it’s just as accurate as other standard tests for nocturnal erections.

The why: Some men with impotence have the organic form, meaning they can’t get erections while awake or asleep. Others have psychogenic impotence, in which the problem isn’t a mechanical one but rather is a psychological issue—these men can and do get nocturnal erections. Urologists need to test for this since the treatments will vary. The standard test is a mercury-filled strain gauge, which requires patients to sleep overnight in the hospital. The stamp method can be done at home, and as the researchers point out costs only 30 cents (in 1980, when the study came out) for three nights of testing versus $500 for the in-hospital version.

Economics: Harming a doll and imagining it’s your boss helps you feel better about their abuse

The research: In two related studies, these researchers found that employees who have unfair or abusive supervisors can have their sense of justice renewed by hurting a doll version of their boss instead. It was pretty simple: they basically asked people to imagine their supervisor as the doll and then gave them tools to harm it. Then they asked them a bunch of questions about how they felt about their boss.

The why: Keeping employees happy is a crucial part of maintaining a productive company, which means managers should be paying attention to ways in which they can ensure their subordinates’ emotional well-being. When those employees feel they’re being treated unfairly, something needs to be done to address it. Dolls may not be the right option, but they note that “subordinates who receive perpetual mistreatment from their supervisor may benefit from harmless acts of symbolic retaliation against their supervisor.”