Argonaut octopuses are enigmatic—down to their self-made ‘shells’

The evolution of the animals' buoyant egg cases is totally unique. 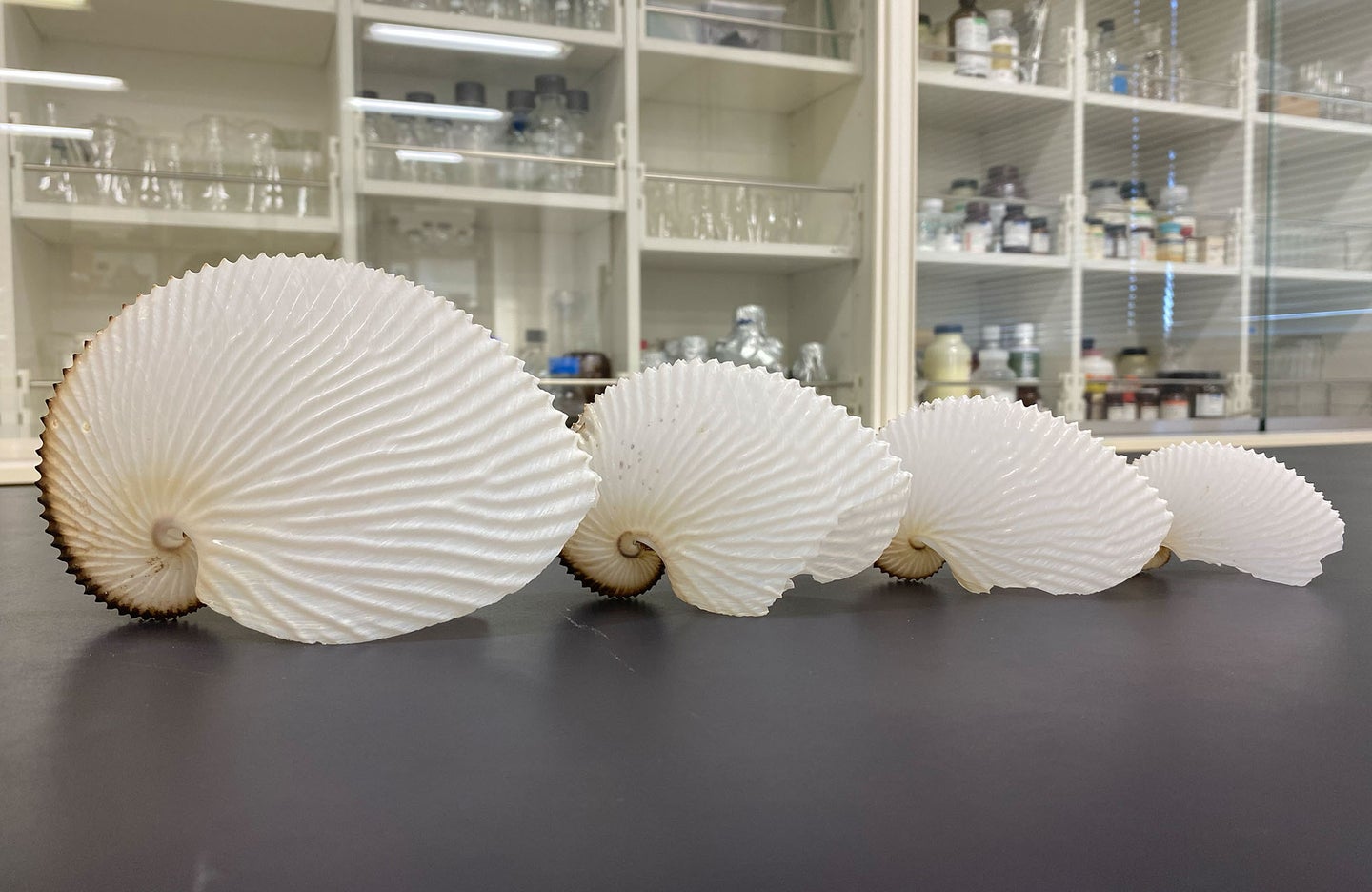 Eight-armed, pink-spotted argonauts live what appears to be a mysterious life. Unlike other octopuses, they spend their days floating near the surface of tropical waters, detaching their arms to have sex, and curling up in a milky white case. And that’s only what we’ve observed in the wild so far. But through studying argonaut genomes, scientists are hoping to reveal a whole lot more about these puzzling cephalopods.

For researchers in Japan, the latest of the argonaut mysteries concerns its “shell,” which is actually a self-built, paper-thin egg case that surrounds the females. This case—which is the reason argonauts are commonly referred to as the paper nautilus (despite their status as octopuses)—has been of particular interest to scientists and philosophers for thousands of years, even piquing Aristotle’s curiosity.

Argonauts are distantly related to a hard-shelled cephalopod called nautiluses, leading scientists to question whether shared genetic information may lead to similar shell formation. Researchers have already known that some proteins used to build nautilus shells weren’t present in argonaut cases, meaning the “shell” of argonauts is not compositionally the same as those of the nautilus. What they didn’t know was whether argonauts still harbor the genetic information used to build these nautilus shells in their genomes.

In a study published today in Genome Biology and Evolution, a team of biologists sequenced genomes from the species Argonauta argo, the greater argonaut, to figure out the origin of argonaut shells. According to Davin Setiamarga, a molecular biologist at the National Institute of Technology, Wakayama College, and a lead researcher on the genome project, although argonauts have the genes needed to build shells like their nautilus relatives, they use completely different genes to make their egg cases.

That came as a surprise, says Setiamarga. “We were thinking that there is a possibility that argonauts just reactivated some of these old genes to form the mollusk shell,” he says. “But we found out that actually, that’s not the case. They use a different set of genes.”

[Related: Slap another cephalopod on the vampire squid’s family tree]

The scientists looked at genetic information in argonaut cells to determine whether the genes required for shell-building in other species of cephalopods, such as nautiluses, are repurposed to form an egg case in these animals.

Argonauts are notoriously difficult to keep in captivity, so to secure genetic information, Setiamarga and his team gathered samples from greater argonauts with the help of local fishermen in the Sea of Japan near the Oki Islands. The researchers then sequenced the extracted argonaut DNA to understand its functions. By comparing this information to that of related mollusks, scientists were able to determine that the proteins needed to form egg cases were not used to build shells in their relatives, suggesting the egg cases had independently evolved. Still, the authors note that further research is needed to better understand why argonauts have retained the genetic information that their relatives use for their own shells and if those genes might serve another purpose for the argonauts.

“While you can find the genes being used to form the mollusk shell inside the argonaut genome, they don’t use them to form their [egg cases]. So we don’t know what they’re still doing in the genome. That will be another question,” Setiamarga says.

Although this research suggests that the egg case evolved separately from the nautilus shell, these structures still share a key function: buoyancy. Unlike many octopuses that live in the benthic zone along the ocean floor, argonauts are pelagic: They bob about in the open sea. Without the anchor of the sea floor, buoyancy control is vital. “Inside the shell, the female makes a point to have a pocket of air,” says Janet Voight, associate curator of invertebrates at Chicago’s Field Museum, who wasn’t part of the research team. “And then she goes down in the water column, that pocket of air gets compressed, and it gives her some buoyancy. So it offsets the weight of her and her developing eggs.” Nautiluses similarly use their shells to regulate their buoyancy, relying on osmosis to control water and gas movement inside.

However, both male and female nautiluses are born with shells and add more chambers as they age, whereas male argonauts, which are about the size of the tip of a human thumb, never build egg cases. Female argonauts, on the other hand—or eight—make their own “shells” after mating, literally with their own hands, by secreting a mineral called calcite from two specialized arms.

This study is a small step in better understanding these elusive creatures, Setiamarga says. “If you want to know the details of how certain characteristics evolve, at the end of the day, you still have to look back at the genome,” he says. About ninety-eight percent of animals on the planet are, like argonauts, invertebrates, he notes. ”And we don’t have enough genomic information on them. If you’re interested in conservation, we don’t have enough information to devise scientifically accurate policies.”

Sequencing the genome of argonauts doesn’t only fill out our comprehension of animals without backbones–it enhances what we know about marine life, too. “This is a group of species that occur in almost every ocean, and we don’t know the fundamental things about it. So doesn’t it seem like we should?” Voight says. “The oceans are just so important to us, and as climate change gets worse, we’ll find that out. If we don’t learn about them now, we may not be able to.”