Superbowl-prediction gene not yet found 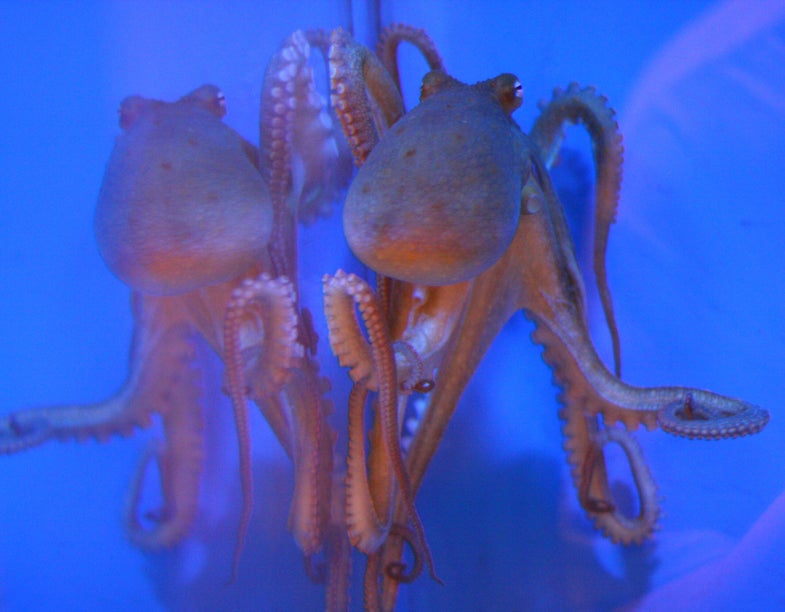 With its eight grasping arms, camouflage-like skin, and large, doughnut-shaped brain, the octopus’ unique physical traits have intrigued scientists for centuries–the late British zoologist Martin Wells dubbed the sea-dwelling creature an alien. Now the predatory mollusk, which is thought to be one of the most intelligent invertebrates, with elaborate problem-solving and learning behaviors, has beat out squid, cuttlefish, and nautiluses in becoming the first cephalopod to have its entire genome sequenced.

Researchers at the University of Chicago and the University of California, Berkeley sequenced the genome of the California two-spot octopus, Octopus bimaculoides. The work will allow scientists to study the genetic factors that give way to the octopus’ odd physical traits, and may reveal novel insights not only about the unique biology of cephalopods, but also about the evolution of traits that give rise to a complex nervous system and adaptive camouflage.

The genome map reveals many genes that are unique to the octopus, including six genes that code for reflectins, the proteins that enable the animal’s skin to employ their camouflage technique by reflecting light and changing color. Reflectin has recently been studied to harness its abilities to create a better camouflage material for soldiers or others. While this new genomic information could help in that area, the study’s authors say that’s still years out. First they hope to sequence the genomes of other cephalopods and compare each one’s reflectin proteins to understand them all better on the genomic level.

The researchers also found a gene family called the protocadherins to be more common and more complex than expected. The protocadherins help out in nervous system development and the interactions between neurons. The octopus genome contained 168 protocadherin genes, which is 10 times more than many vertebrates, and more than twice as many as humans and other mammals.

The octopus genome looks like it’s “been put into a blender and mixed.”

“This was very surprising,” said Clifton Ragsdale, a professor of neurobiology at the University of Chicago and a co-author of the study. “We didn’t expect to see that level of expansion.” However, given the octopus’ complex nervous system, this may make sense. “It seems clear that they are vital to setting up neuronal wiring,” said Caroline Albertin, a graduate student in the department of organismal biology and anatomy at the University of Chicago and the co-lead author of the report.

The octopus also has a large number of transposons, or “jumping genes,” that are able to rearrange themselves on the genome. Albertin said in a press release that it looked like a normal invertebrate genome that’s “been put into a blender and mixed,” which leads to genes being placed in new environments and performing novel functions.

Going forward, the researchers want to study the genomes of other cephalopods, which researchers from other institutions are currently working on through the Cephalopod Sequencing Consortium. The results may be out in the next few years, allowing scientists to compare the cephalopod genomes to each other.

Roger Hanlon, a senior scientist and cephalopod researcher at the Woods Hole Marine Biology Laboratory, who was not involved with this study, agrees that the octopus genome not only provides an important stepping stone for understanding cephalopods, but also allows scientists to think about how the brain produces complex behaviors on vastly different levels.

“Scientists can now begin to think about how brains produce behaviors at different scales,” he says. “The cephalopods are an interesting group because of their higher cognitive abilities and apparently different brain structure, all wrapped into a short lifecycle compared to vertebrate animals.”