A gene responsible for a lemony leopard gecko color morph is also linked to melanoma in humans. 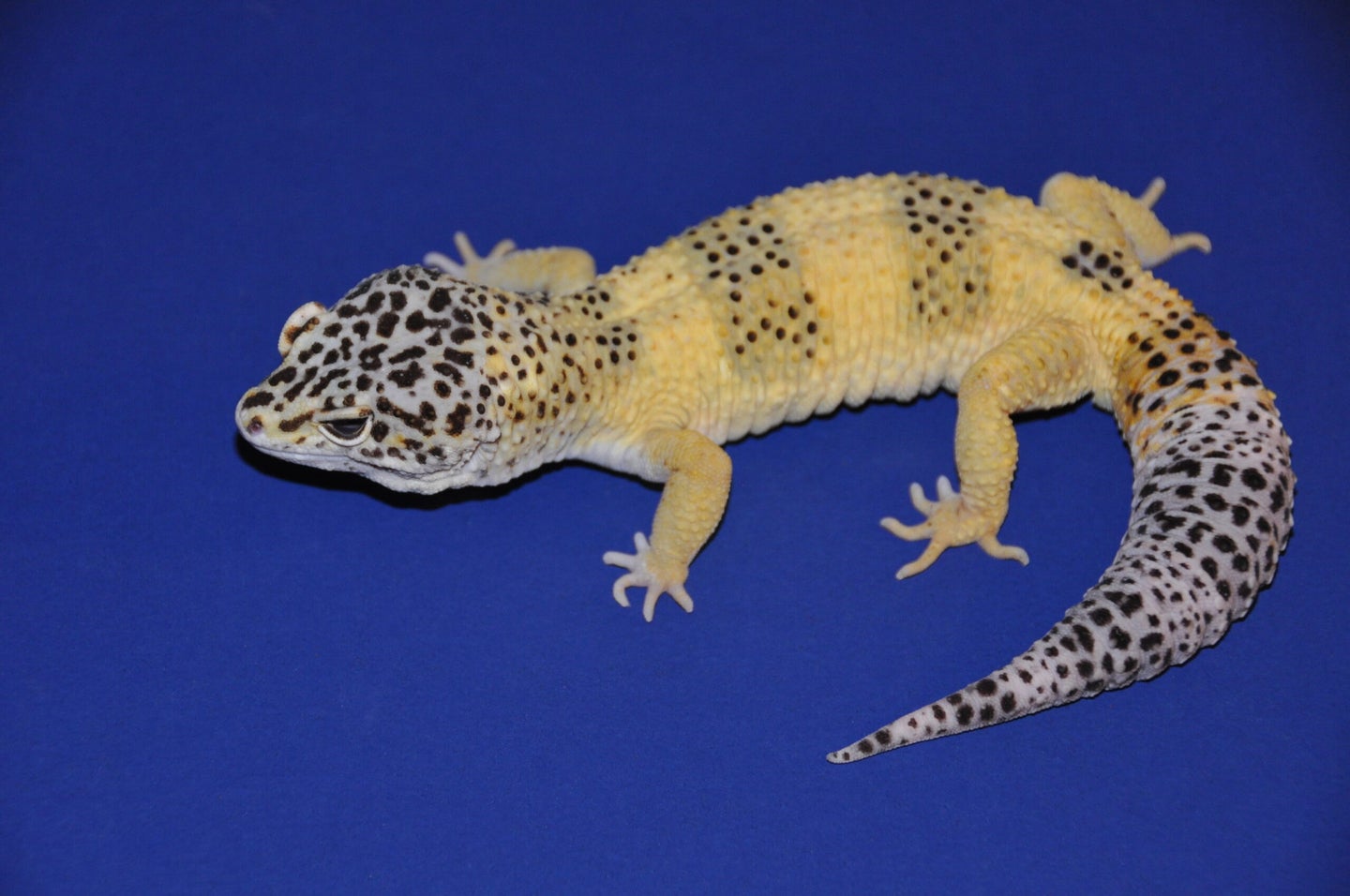 Mr. Frosty isn’t a snowman or a company that sells slushies, but a mutant leopard gecko that might help us better understand skin cancer. In 2015, a reptile breeder noticed one member of the colony was a little brighter than the others, with a yellow back and legs. That gecko, named “Mr. Frosty” for its distinct white undertones, went on to father hundreds of similarly patterned lizards (dubbed “Lemon Frost” geckos) that became a hit among pet shoppers.

Over time though, a problem emerged: Hardened white spots frequently developed all over Lemon Frost geckos’ skin. Sometimes, the spots even expanded into large growths, which researchers identified as tumors made up of iridophores, a type of cell found in insects, reptiles, fish, and amphibians that’s involved in skin color. About 80 percent of Lemon Frost geckos go on to develop iridophoroma tumors, says Longhua Guo, a geneticist at the University of California at Los Angeles.

Now, Guo and his colleagues have identified the gene likely responsible for both the Lemon Frost morph’s unique coloration and the tumors. They published their work this week in the journal PLOS Genetics. The findings highlight the importance of genetic studies in animals that science usually ignores, and offer a possible new model organism for the study of human skin cancer.

Prior to his research on Lemon Frosts, Guo hadn’t even touched a gecko. In fact, he came to his study subject almost by accident, stumbling across an article about leopard geckos and being “captivated by how beautiful they look.” Having been bred for decades, these creatures come in an astonishing variety of colors, which is exciting from a genetics perspective, he says. “Nature is very colorful,” says Guo, but “we don’t know enough about how color is made.”

Mammal skin and fur color are almost solely determined by melanophores—cells that produce melanin—but many other animals have more than one type of color cell, producing a variety of pigments which result in numerous skin and scale colors. For example, cephalopods like cuttlefish and octopus have at least three different types of cells involved in their magnificent color displays. Outside of mammalian melanophores, the genetic basis of animals’ color variations is poorly studied.

To find the gene or genes responsible for the Lemon Frost skin coloring, Guo and Leonid Kruglyak, professor of biochemistry and genetics also at UCLA, analyzed a record provided by a reptile breeder with information on the features of all the geckos in their colony and how each animal was related to one another.

Using this record, the researchers identified a pattern of inheritance. They found that some of the breeder’s leopard geckos looked like Mr. Frosty, almost white with reduced spots and a yellow back and legs. But others had even more yellow coloration extending further onto their heads and tails, thickened skin, and more tumor development. This group was dubbed “Super Lemon Frosts.” A final set of geckos had the standard leopard gecko spots with beige colored skin surrounding them. This pattern revealed that the Lemon Frost traits could likely be traced to a single mutated gene, and that the mutated gene responsible was semi-dominant. Meaning, one copy of the mutation leads to changes in a gecko’s traits (more yellow coloration, tumor growth, thicker skin), but two copies results in even more intense differences.

The scientists separated these three groups of geckos and then sequenced and compared their DNA—looking for a gene matching the expected inheritance pattern. Once they’d identified a suspected region of the leopard gecko genome, the researchers went to the genetic database to compare their gene sequence with other well-mapped animal genomes. Through comparisons to chickens, green anole lizards, and humans, the scientists honed in on a gene called the SPINT1 gene. A mutated form of this SPINT1 gene, dubbed the Lemon Frost gene, seemed to cause the Lemon Frost skin, as well as the tumors.

Mutations in the SPINT1 gene have previously been implicated in the development of skin cutaneous melanoma (SKCM), the most dangerous form of skin cancer in humans, and tumor growth in zebrafish.

But follow-up work is needed to confirm the link between SPINT1 and tumors in Lemon Frost geckos, says Craig Ceol, a geneticist at the University of Massachusetts studying melanoma using zebrafish as a model, who was not involved in the gecko work. Ceol explains that the researchers were careful in their methods and conclusions. Though he says usually, in similar genetic studies of more commonly used model animals, the next step would be to make transgenic geckos—testing the role of SPINT1 by inserting different versions of the gene and observing the effect on tumor growth. “You put in a normal copy of the gene, and then you would no longer get tumors. Or you would correct a mutation that’s there, and then we would no longer get tumors,” he says. “But I think that’s really, really hard to do in geckos.”

Model organisms are used to study human biology and disease because of the range of information and experimental possibilities they provide. “There’s a lot of experiments that we can do on model organisms that, you know, obviously, you can’t do on people,” says Ceol. “You can do these experiments where you give [animals] a cancer, and then look to treat it, or look to study the process by which the cancer arises, or by which it spreads.”

Geneticists usually focus their work in one of a few commonly used animal models like mice, zebrafish, and fruit flies. Leopard geckos aren’t one of those model organisms, and there are no reptiles at all commonly used in genetics research, says Doug Menke, a developmental geneticist at the University of Georgia, not affiliated with the new findings, whose own work focuses on anolis lizards. Yet Menke sees leopard geckos as a big opportunity for expanding genetic research and public understanding. “The standard leopard gecko is quite striking, and I think when you see images of how mutation can change the coloration or the pattern of the animal—there’s nothing like actually seeing with your own eyes, the sorts of changes that a genetic mutation or a genetic variant can cause.”

And studying a diverse array of model organisms is important, says Menke, because comparisons between lots of different animal genes can tell us more about the world and potentially help us to better understand our own genetics and diseases. He explains that comparing multiple, distantly related species can “help you understand what aspects of tumor formation and development are unique to an individual species, whether it’s a human or a gecko, and what’s shared across species.” He adds, “If you only study a single species to model human disease, you don’t always know how good that model or proxy for human disease is. How relevant is it? How similar is that disease state to the human state?”

But until relatively recently, scientists haven’t had the tools to study the genetics of non-model organisms. Identifying genes in previously unstudied animals required years of genome mapping (like the human genome project, which began in 1990 and only just reached completion a few weeks ago). Now though, new methods have allowed scientists to use other, well-mapped genomes as the jumping off point to learn more about less understood organisms like leopard geckos. Historically, the small number of genetically studied organisms posed “a huge limitation on the full range of phenomena that you can observe and study,” says Kruglyak. “It’s pretty exciting that the technologies are really democratizing this and extending it to a much broader range of species you can study.”

Because mutations in the SPINT1 gene cause cancer in both humans and geckos, the reptiles could act as a potential future model, studying ways to treat, prevent, or cure melanoma, according to Guo and Kruglyak. “I think it says geckos could be a potential model system for cancers and skin diseases,” agrees Ceol. For instance, he says leopard geckos could be useful for studying not just tumor emergence, but also metastasis, or cancer spread, which is difficult to study in other animals.

The new findings suggest that the SPINT1 associated iridophoroma in Lemon Frost geckos could be metastatic, as the researchers documented instances of tumors in geckos’ livers and mouths as well as on the skin. Ceol points out, though, that “they haven’t formally shown [metastasis].” It’s possible the tumors observed on the gecko’s organs are still skin tumors, and genetic analysis is necessary to know for sure, he adds.

For now, Ceol says, he’ll be sticking to zebrafish. “I’m not sure that I would go out and adopt [leopard geckos] as a model myself.”

He adds, “Zebrafish have been worked on for a long time and a lot of people have developed good techniques for them. There’s a lot of advantages to working in the zebrafish system.”

But Guo hopes to continue exploring leopard gecko genetics for quite some time. He’s already working on his next project analyzing other color morphs. In the process, it’s possible other medically important genes will be uncovered, says Ceol. “There might be other mutations out there like it,” he explains.

Finally, Guo hopes his recent finding will propel other geneticists to look into geckos and other non-model organisms in their research. “I just hope people can take advantage of our finding and move it forward.”