Octopuses are not aliens, but boy are they a bunch of beautiful weirdos 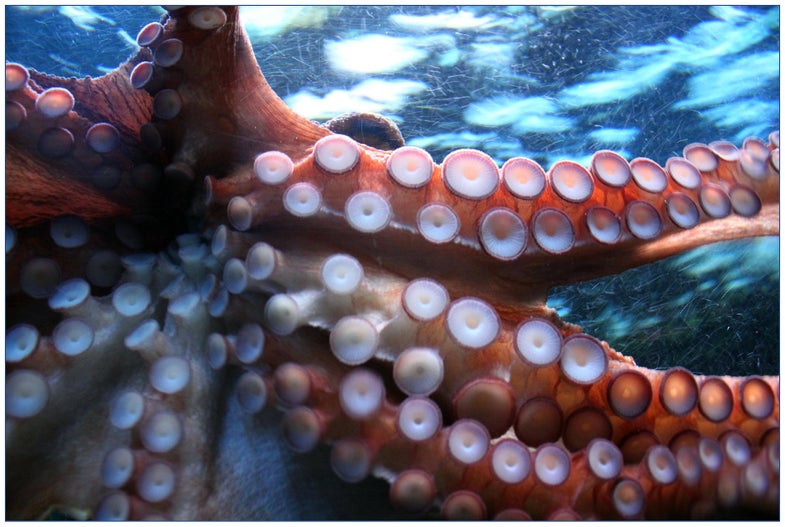 We have to stop taking away Mother Nature’s achievements. Every time a creature is quirky or bizarre people say that it must be an alien, when the reality is that evolution is capable of creating some of the strangest, creepiest organisms you could ever fathom.

This includes octopuses, which for the record is the correct pluralization of octopus. (It can also be octopodes, since the word is Greek in origin, but never octopi.)

Octopuses seem to be particularly prone to alien theories. The most recent is thanks to a group of scientists—none of whom study zoology and many of whom don’t even study anything biological—wrote a paper in the journal Progress in Biophysics and Molecular Biology that claimed to show octopuses might come from space. In fact, they say that the entire Cambrian explosion (a period 541 million years ago when animal diversity rapidly expanded, producing early forms of many creatures alive today) originated with an influx of viruses from the cosmos. Thirty-three authors co-signed their names to this paper, including the man who originally proposed this highly controversial idea in the 1970s. They use an octopus as an example, noting that “The transformative genes leading from the consensus ancestral Nautilus to the common Cuttlefish to Squid to the common Octopus are not easily to be found in any pre-existing life form” and that therefore “it is plausible then to suggest they seem to be borrowed from a far distant ‘future’ in terms of terrestrial evolution, or more realistically from the cosmos at large.”

E.J. Steele, a molecular immunologist at the C.Y. O’Connor ERADE Village Foundation, one of the co-authors, wrote that “From our perspective the evidence is now quite overwhelming” for their theory, and that they felt it merited a “complete rethink” of evolutionary processes. Steele thinks the claims presented in the paper have been “suppressed and ignored for many years” and adds that “I have great faith that other objective scientists confronted with the same array of data would behave like me and reach the same interpretation.”

The problem is that viruses and octopuses are both firmly terrestrial. A commentary, written by molecular geneticist Karin Moelling, printed alongside the article, notes that though the authors clearly believe their own theory, they’re “describing it as evidence-based, yet without any of the necessary evidence.” She concludes that “the main statement about viruses, microbes and even animals which came to us from space, cannot be taken seriously.”

William Gilly, a biologist specializing in cephalopods at the Hopkins Marine Station of Stanford University, told Popular Science that “To be truthful, this paper seems to be so badly written and full of misleading statements that I cannot believe that it passed peer-review in any respectable journal.” He also asked whether this was perhaps the April Fool’s issue of the journal, as that would be the easiest explanation. (We reached out to said journal and will update this article when they respond.) Another biologist, Ken Stedman, told Live Science that “Many of the claims in this paper are beyond speculative, and not even really looking at the literature.”

Caroline Albertin agrees. She’s a researcher at the Marine Biological Laboratory and says to find confirmation of octopuses’ earthly origins, one need “look no further than their DNA.” She explains that in fact, one of the papers cited in the new study “shows very clearly that octopuses share a lot of the same genes with other animals—molluscs like snails and clams, flies, and humans, indicating that they share common ancestors, and therefore are from the same planet as the rest of us.” The cephalopod fossil record may be limited, but Albertin notes that’s it’s hard to find fossils of soft-bodied creatures in general, which is why biologists look back at nautiluses and ammonites to trace evolutionary origins.

Back in 2016, yet another set of headlines proclaimed that octopus DNA came from space, which was wrong, but persisted because some researcher gave a reporter a juicy quote about octopuses being practically alien.

Here’s the thing: if octopuses are aliens, then so are milk-sweating echidnas, cartilaginous blobfish, and indestructible tardigrades. Which is to say, until the day we scoop up bacterial goop in the oceans of Europa, we can safely proclaim that 100 percent of the weirdest creatures we know about were created right here on Earth. “The fact that they are so cool and weird even though they have similar genes to other animals is what I am most fascinated by,” Albertin says. Her own work focuses on figuring out how genes crucial to other animals’ developments play a role in octopus bodies as well. “Obviously, that wouldn’t work if they had a celestial origin.”

So let’s celebrate how incredibly bizarre our planet has made octopuses instead of flinging the credit out into the larger cosmos.

For starters, octopuses have literal blue blood. There’s a common misunderstanding that human blood is blue inside your body when it’s deoxygenated, but that comes from the fact that your veins look blue through your skin. Deoxygenated blood is still very red because of the iron-based mechanism by which our bodies transport oxygen molecules. Octopuses said ‘no, thanks’ to iron blood, though, and swapped in a copper-based protein that binds oxygen instead. It’s more efficient than iron in the cold, low-oxygen environments that most octopuses live in. It sure does make them spookier, but they’re not alone. The ocellated icefish has clear blood and there are lizards that run green. Both are from Earth.

Octopuses’ brains are in their arms, which is admittedly pretty odd. Two-thirds of an octopus’ neurons reside in the long appendages that many mistakenly call “tentacles” (in modern zoology, a “tentacle” is relatively long and thin, with some kind of clubbed end). This decentralized way of thinking means that even severed arms can “think” for themselves, or at least respond to physical stimuli and try to escape whatever is trying to eat them, which is why people die from trying to swallow live octopus arms only to find that the arm is still fighting back (a reported six people die this way on average each year in South Korea, where the dish is popular).

But their peculiar approach to brains hasn’t stopped them from ranking among the most intelligent creatures that we know of. Octopuses regularly use tools, solve puzzles, and generally cause mayhem by sneaking in and out of their enclosures. They also sometimes accessorize by hopping inside old coconut shells and using them as little mobile homes, all while looking more stylish than most humans.

As they travel, they also taste everything that they walk on since their suckers are all sensory organs. You’d think that would motivate them to swim everywhere, but unfortunately one of their three hearts has to stop beating whenever they swim, which is quite tiring and means that many octopuses prefer to stroll. Their other two hearts provide blood to the gills, but that third heart circulates blood to the central organs. The main organs reside inside the octopus’ bulbous head (called a mantle), which contains no bones. The only truly hard part of an octopus is the beak, which is basically its mouth. This means that the critters can squeeze through almost any opening as long as it’s bigger than the schnoz. Everything else is negotiable.

But perhaps the weirdest thing about octopuses is that, unlike many of the other highly intelligent creatures populating our planet, they don’t live long. Some live just six months, others a few years, and most males die shortly after mating. The females last long enough to protect their clutch of eggs, during which time they slowly starve to death.

Sadly, the myth that octopuses are from space will probably outlive any octopuses alive today. But you can rise above the nonsense and appreciate them for what they truly are: some of the weirdest and most wonderful earthlings ever known.