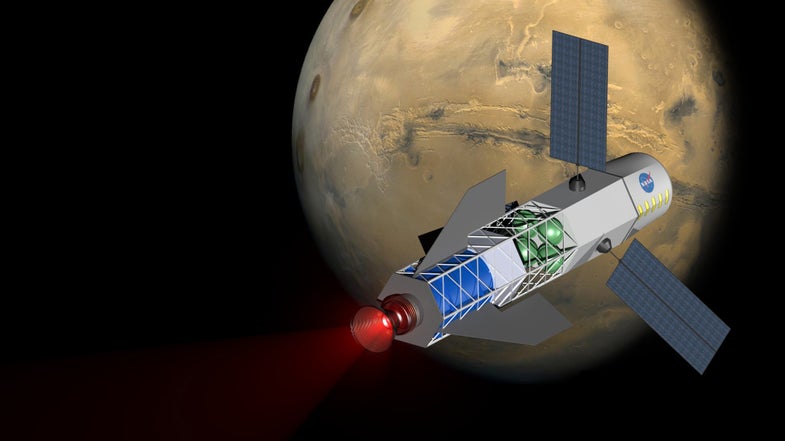 A concept drawing of a fusion-powered spacecraft flying around Mars. University of Washington, MSNW
SHARE

In 1994, Glen Wurden watched several huge pieces of Comet Shoemaker-Levy 9 crash into Jupiter, generating an explosion big enough to see from Earth. “Had they hit Earth, we would not be standing here today,” said Wurden in a recent talk at MIT.

Wurden is a fusion researcher at the Los Alamos National Laboratory, and an amateur astronomer by night.

Although the risk of a giant, civilization-ending space rock hitting Earth is very low, the threat is always there (just ask the dinosaurs). And according to Wurden, there may be only one way to stop it: fusion rockets. That kind of technology is decades away, but Wurden asserts that we urgently need to invest in making it real.

“The idea is ‘out there,’ but it’s also very logical,” he says. “When you have a big problem on your hands, you need a big answer.”

The Problem With Comets

Scientists have thought up plenty of ways to deter space rocks–for example, using tractor beams or ion pulses to gently nudge them off the warpath. Unfortunately, these methods may be too slow to deflect a comet.

Comets can come with very little warning. They can travel twice as fast as an asteroid, and their orbits can take them extremely far away, only coming in our vicinity every 100,000 or million years or so. Many comets are still undiscovered. And because they’re often dark in color, astronomers can only spot them when they start to get heated by the sun–which happens once they get to about the distance of Jupiter.

From that distance, if a large comet were barreling toward Earth, it would give humanity about 6 to 18 months to try to fend it off. That’s simply not enough time for tractor beams or ion pulses to change its course.

Even if a rocket hits the comet when it’s still near Jupiter, it will miss the Earth by less than half the distance between the Earth and the Moon. If we use a slower rocket and hit the comet much later (today’s rockets would catch the comet about 30 million miles away) it won’t be possible to deflect it far enough to prevent a cataclysmic collision.

How To Deflect A Deadly Comet

Wurden’s proposal would use a fusion rocket to deliver a nuclear explosive to an incoming comet.

Not as easy as it sounds, and it doesn’t sound easy. But according to Wurden, we’ll need a rocket that’s 20 to 40 times faster than our current rockets in order to get to the incoming comet in time, and for those kinds of speeds, he says, we need fusion.

Scientists have been talking about building fusion rockets for decades, mostly as a quick way to explore the solar system and travel to other star systems. But since there was never a true need for such a rocket, the idea was set aside. There’s also the matter of, well, fusion is hard.

“When you have a big problem on your hands, you need a big answer.”

Fusion happens when two nuclei (usually from hydrogen atoms) crash into each other and fuse together. In the process, they release a huge amount of energy, which force other nuclei fuse together and release more energy, and so on, in a chain reaction. This type of nuclear energy would be clean and essentially infinite.

The main hurdle is getting the reaction started, which requires and immense amount of heat, and containing the reaction without putting in more energy than you get out of it. The National Ignition Facility and the international ITER project, among others, are trying to make it work, but a big fusion breakthrough may still be decades away. And even then we’d have to figure out how to make a fusion reactor small enough to fit on a rocket. 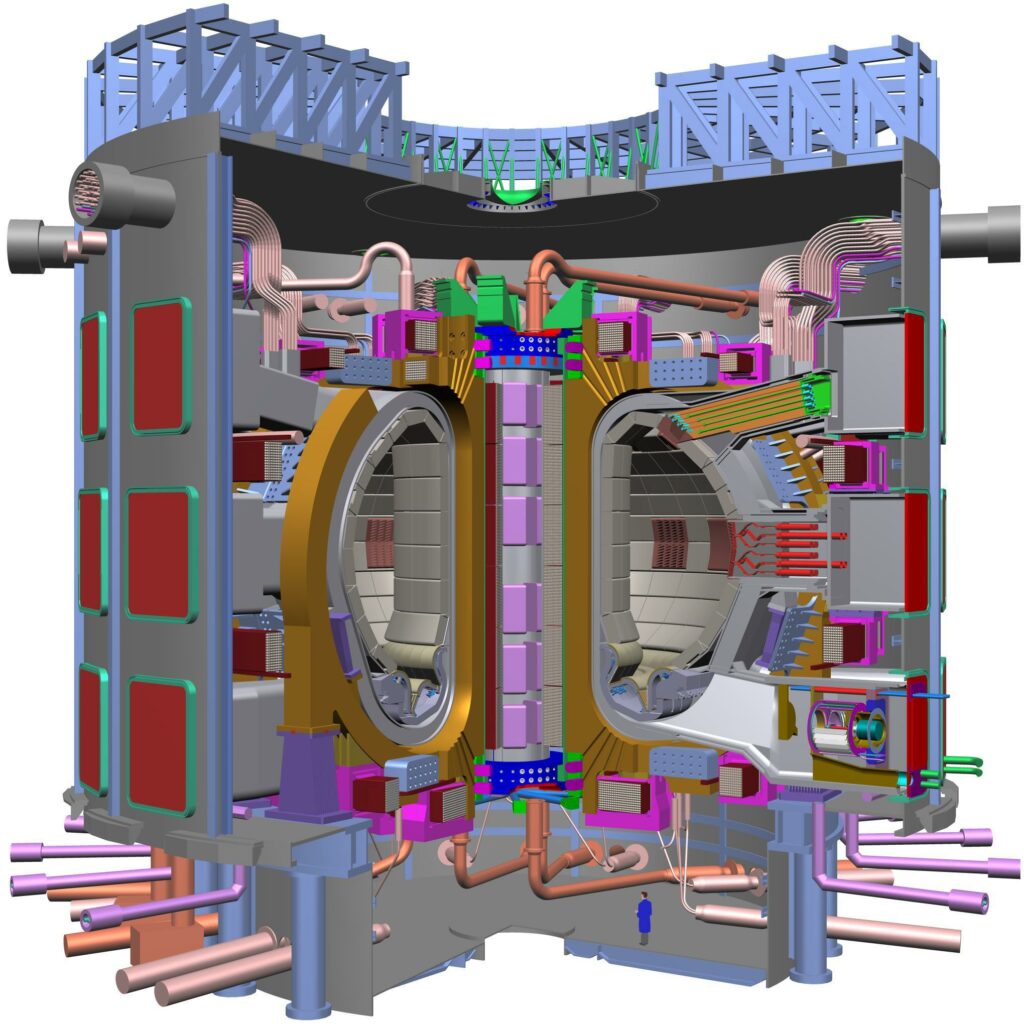 The international community will attempt to generate electricity at ITER, a huge experimental fusion reactor that’s being built in France.

Wurden hopes that by calling attention to the dangers of comets, it will give the field of research a greater sense of urgency. Admittedly, his own fusion research stands to gain from any influx of funding that might result.

Popular Science asked scientists at NASA to comment on the plausibility of and need for fusion rockets, but our attempts were stonewalled by the press office.

Step 2: Use A Nuclear Explosive To Flambé The Surface Of The Comet

When a large, fast-moving space rock is discovered heading for Earth on short notice, scientists agree that we’ll need to set off an explosive to deter it.

But unlike in the movie Armageddon, they wouldn’t use the explosive to blow up the rock itself. Instead, the bomb would go off about a half a mile away from the comet–close enough to heat it up and cause material to boil off the comet’s surface. That ejection of mass essentially turns the comet into a rocket. It changes the comet’s velocity, which in turn changes its trajectory around the sun, potentially moving it off of its collision course with Earth.

Wurden estimates the explosion could slow the comet down by about 10 meters per second. That may not sound like a lot, but if the bomb goes off 3 to 6 months before the comet is due to arrive at Earth, then all of those seconds add up into a trajectory change of about 150,000 kilometers (93,205 miles) by the time it approaches Earth. It would still be a very close shave, but it’s far better than a head-on collision.

Why Do We Need Fusion Rockets?

In order to get the bomb in front of a comet with just a 6- to 18-month warning time, it’ll need to get there fast, moving at roughly the same speed as the comet. In a paper published last fall, Wurden and his colleagues give a target velocity of about 53 kilometers per second.

New Horizons, the fastest spacecraft ever launched, reached speeds of 16.2 km/s, but it got a speed boost from flying past Jupiter–that eats up time, and also only works if the planets happen to line up properly.

Fission-powered rockets have been testing, but they could reach speeds of only about 8.5 km/s.

Another, older idea would be to invent a spacecraft powered by the nuclear bombs that we already have. The bombs would go off one after another–pop pop pop, says Wurden–while an ablation plate protects the spacecraft from burning up. This method might be able to get a spacecraft to a comet in time. However, the world would need to keep stockpiles of thousands of freshly made nuclear bombs on hand in the event a comet shows up, which hardly seems like a good strategy to ensure our planet’s safety.

Antimatter rockets, like in Star Trek, would work great too, says Wurden. “The problem is we don’t have any antimatter. It’s really hard to come by.”

To him, a fusion rocket is most plausible at this point, and his team calculates it could potentially reach speeds of about 1000 km/s.

Short as that trip would be, the journey to actually creating a fusion-powered rocket could take 30-40 years or longer.

How To Make It Happen

Currently, the main focus is on finding and tracking asteroids and comets, but that needs to shift toward developing a deflection capability, says Wurden.

So how much would developing a fusion reactor cost? Wurden estimates $10 billion per year would put the research on a good track.

At $10 billion per year, we could have a fusion rocket in 3-4 decades.

$10 billion is a lot of money. But on the other hand, every military aircraft carrier costs $13 billion. And Americans spend about $39 billion dollars on makeup every year. Is spending $10 billion a year to ensure the survival of our species really so much to ask?

“There are a dozen new long-period comets discovered every year,” says Wurden. “It’s just a giant pinball game out there in the solar system, and it’s just a question of when, not if, one actually comes our way.”