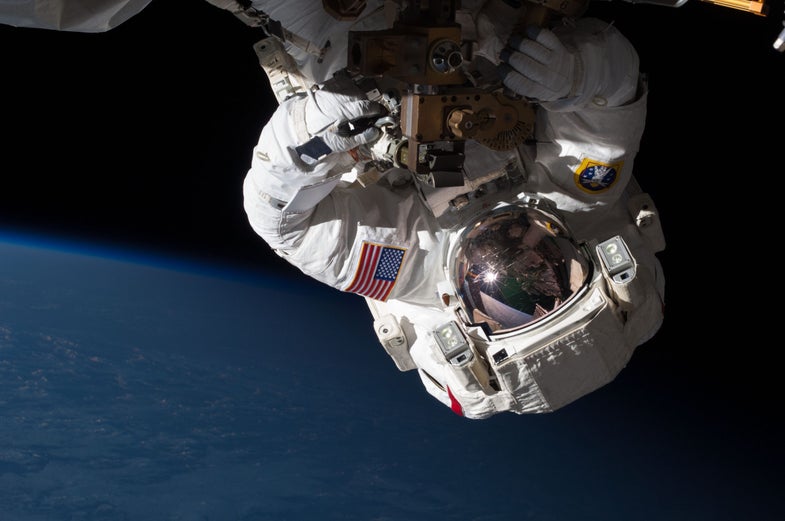 Don’t panic. No one is suggesting that astronauts on long-term space missions should actually snack on their own bodily waste. But just as the spacefarers’ urine is recycled back into drinking water, their feces may soon have a role in keeping them fed. A new study published in Life Sciences in Space Research suggests a process by which biological waste could help fuel the production of (slightly) more savory foodstuffs.

As scientists look beyond life on the International Space Station (ISS) and entertain trips to Mars and beyond, one of the most obvious problems to solve is finding a food source. It takes about nine months to get to the red planet if you go when orbits are most optimally aligned, so even if we went there and turned right back around (which would never be the case) we’d need a year-and-a-half’s worth of food for the whole crew. We could certainly bundle up that many MREs for the road, but rocket fuel is so costly that any extra poundage is best avoided. If we could create a system that allowed astronauts to continuously farm fresh food, it could potentially take up less space on the craft—and provide them with a reliable source of nutrition even after they landed on a new world.

In theory, poop could play a powerful role. Currently, human waste on the ISS is stored up tight until it’s dumped into the atmosphere to flare up like a shooting star. That’s for good reason: NASA doesn’t want to risk any dangerous microbes festering in that small, enclosed space. But that means we’re not utilizing the nutrients like nitrogen that our feces release, which could help fertilize soil. In “The Martian,” stranded astronaut Mark Watney famously relied on his colleagues’ vacuum-sealed excrement to endow the red planet’s dead dirt with Earthly microbes, but he was in dire circumstances. We’d never do something so risky on purpose: The likelihood of inadvertently fostering the growth of dangerous pathogens near your food source is too high.

If you want to safely use the poo, you need to find a way to trap those nutrients while leaving the actual muck behind. That’s what scientists at Penn State set out to find—how to get those fertile gases out of our feces for further use. And they quickly realized they wouldn’t be growing potatoes.

“Most food production for life support systems focuses on plant growth, since aquaculture or animal husbandry would be pretty difficult to manage in a small space,” says Lisa Steinberg, a science lab supervisor at Delaware County Community College who worked on the project as a Penn State postdoc. “However, the high-protein parts of plants, such as seeds and nuts, are a relatively small part of the overall plant biomass, so supplying enough protein for astronauts is a continual worry.”

Their solution? Once bacteria digest the poop to produce gases like nitrogen and methane, use those gases to feed… other bacteria. And then eat those delicious microscopic morsels.

“How would it be for the astronauts? I have no idea,” says study co-author Christopher House, professor of geosciences at Penn State. “It doesn’t sound that great.”

House, Steinberg, and former Penn State undergrad Rachel Kronyak focused on bacteria that are high in protein, including a species that’s already manufactured into animal feed. It’s difficult to imagine chowing down on teeny tiny microbes, but these species grow in clusters called biofilms, which en masse present as, well, goop. You could harvest those cultivated biofilms to feed a more palatable potential food source, like an aquarium, House offers, but let’s be real: size restrictions being such as they are, astronauts would probably just have to eat the goop straight from the tin. It probably wouldn’t serve as a primary source of calories, but the high-protein biomass could serve as a helpful supplement.

“You could grow it on a flat surface submerged in a bit of water, and it might grow as a sort of plate of biomass on whatever substrate you put down,” House says. “Maybe you could even grow it on something edible so the whole surface could be eaten.”

Steinberg says the biomass would probably look something like Marmite or Vegemite. “Personally, I would pack Sriracha,” she adds, “because that can make anything taste good.”

For now the system is in its theoretical stages. The team figured out how separate reactors (inspired by fish tank filtration) could treat waste and then fuel microbial growth, and they have some ideas for which microbes might work best with the system. They even did some work toward confirming that the requisite bacteria could survive various shocks to the system you might experience in space, like changes in temperature. But it will take a lot more research to actually engineer something both small and safe enough to use in space and large and efficient enough to provide a useful crop of bacteri-goo.

“I don’t necessarily think we have the right microbes yet,” House says. “We listed some that are a good starting point. One needs to think about not just which microbes are the right ones to break down the waste, but which will create the best nutrients with the least energy lost, and with the least use of important resources like water and oxygen.”

He adds that to him, one of the biggest benefits of the NASA-funded project is that it allowed Steinberg, who was just finishing her PhD at the start of the project, to stay on and continue postdoctoral studies.

“I think there’s a lot of opportunity for undergrads to take what we did and move it the next several steps,” he says. “I think there may be some future work here.”