How It Works: The Dolphin Kick 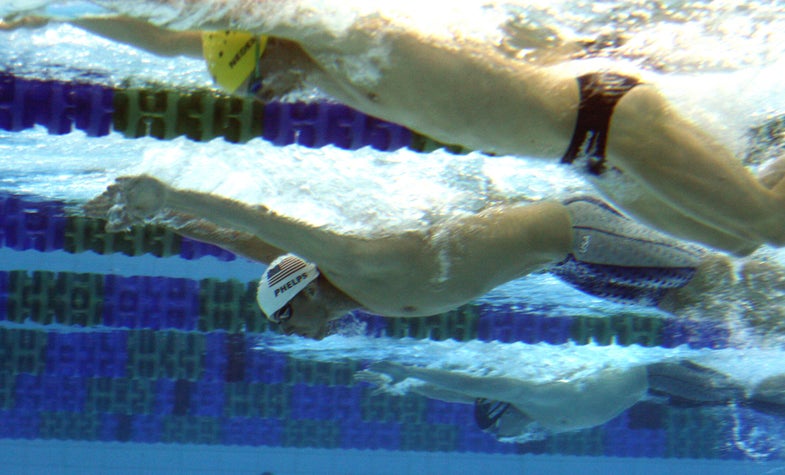 Despite its name, the dolphin kick—the motion that propels the swimmer forward underwater after he dives in and at the turns—isn’t just about the legs. It requires a swimmer’s entire body to crack like a whip, creating a fluid wave that starts at the chest and increases in amplitude as it travels all the way through the toes. In the best swimmers, this wave moves at about nine feet every second, about half the speed an actual dolphin performs the same motion. To move this quickly, whole-body flexibility is key. Twenty-time world record holder Michael Phelps ripples two waves down his unusually long, flexible torso at a time—cracking the whip in his body twice as often as his competition. Since the kick moves swimmers far faster than any surface stroke (there’s less resistance underwater), perfecting it can give Phelps a big advantage off the gate. So why not just stay down there the whole race? After the 1988 Olympics, the world’s governing body of swimming, FINA, restricted it to the first 15 meters after a start or turn.

This Year
“The dolphin kick is going to be used as a weapon in Beijing,” says Russell Mark, biomechanist manager of the US national swim team. During the last four years, Mark says the best American swimmers, including Phelps, have been especially focused on honing the technique. Engineers at George Washington University studying fluid dynamics recently calculated that more than 75 percent of the propulsive force of the dolphin kick comes from snapping the ankle. “If you have the ability to flip your ankle like a ballet dancer, you’ll get more whiplash action,” says Rajat Mittal, who has consulted with USA Swimming. The elite swimmers they’ve studied can bend their ankles beyond that of a ballerina’s pointed toe.

Below: By cracking one’s body like a whip, the dolphin kick can move swimmers far faster than any surface stroke.