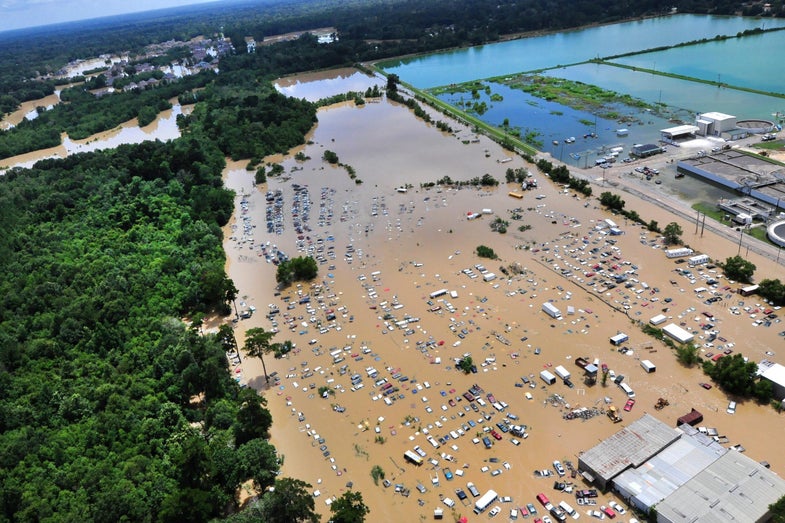 Flooding In Baton Rouge as seen from a helicopter. USDA
SHARE

Today, The Guardian reported that President-Elect Donald Trump plans to defund NASA’s Earth Science Division to cut down on what a campaign advisor referred to as “politically correct environmental monitoring”.

NASA may instead focus on a Cold War-era throwback space race to explore the cosmos, leaving climate research to other agencies. But NASA’s unique position as a space agency means that it has a view of Earth that other agencies like the National Oceanic and Atmospheric Administration (NOAA) are rarely afforded. Indeed, NOAA and NASA often partner on climate-monitoring projects like the recently launched GOES-R satellite or the DSCOVR climate observatory, which watches for space weather that can knock out electrical grids (among many other things).

No one is denying that exploration is a core mission for NASA. The agency should be out exploring strange new worlds. But if we really want to explore other planets or moons in our solar system, shouldn’t we make sure we know what’s happening with our own first?

Earth is not somehow a separate place from space. Our climate’s biggest driver is the light from our Sun, which drives wind and ocean currents, enables plants to grow, and makes the seasons change. Our moon controls the daily flow of tides around the Earth. Asteroid impacts have shaped not only the surface of the planet, but the path of life as it evolved. Our atmosphere is the only barrier between all known life and the vast vacuum of space. Understanding that fragile, thin envelope of air and wind can’t be accomplished by only studying what happens at the lowest level of our atmosphere, where it meet’s the Earth’s surface. If we want a full picture, we need to also monitor what’s happening at the atmosphere’s outer boundary, where it meets the great unknown.

Without NASA’s participation in these kinds of climate monitoring, there will be a huge gap in the data that other agencies will struggle to fill. NASA’s budget for Earth Sciences in 2017 is about $2 billion out of $19 billion total. NOAA’s total budget for 2017 is only $5.8 billion.

What’s more, NASA’s Earth Sciences Division is expressly non-partisan. It states its mission clearly on its website: “Our core purpose is to advance understanding of our planet, make our data and information freely available to all and to deliver our science objectively so that others can make informed decisions. We believe that partnerships and collaboration are how we create greater on-the-ground impacts for the benefit of people around the world. Satellite information, in the hands of users on the ground, can enable smart decisions that ensure people and whole communities—even nations—have what they need to prosper.”

Climate change may be something that has political implications, but monitoring its effects is a matter of preparedness, not politics. The military has been focused on the national security threats of climate change for some time now, preparing for a time when sea level rise might flood naval bases, and when decreasing food and water supplies might cause armed conflict. Though the military’s preparation levels have increased under the current administration, planning for climate change started in 2003 when Republican George W. Bush was president.

But even as the military is preparing for these inevitable changes, and making themselves ready for a more unstable future, people on the ground in the United States – the people that elected Trump – are already facing down that future. Villages in Alaska are being forced to relocate as permafrost thaws and sea levels rise. Islands in Florida and cities along the East coast are experiencing flooding on sunny days. The disastrous floods in Louisiana that forced tens of thousands of people to evacuate are 40 percent more likely now then they were even a few decades ago, thanks to climate change.

For people living in these disaster zones, environmental monitoring isn’t politically correct. It’s a way to save lives.

Our climate is changing. It’s going to keep changing whether we monitor it or not. People may disagree about the best ways to address climate change’s impact on society, but shouldn’t we at least make sure we see that impact coming?