The chemicals in burnt toast and crispy fries won’t kill you, but the calories might 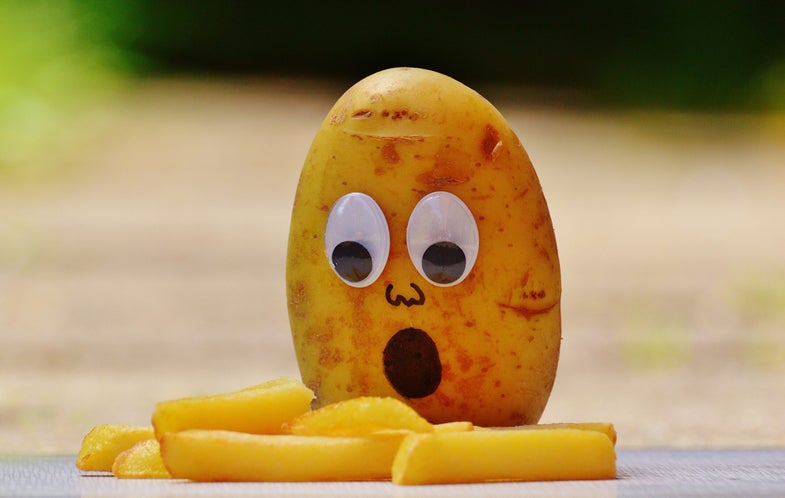 In case you missed it, burnt potatoes and toast give you cancer. So says the British government, anyway.

On Monday, they launched a new campaign to raise awareness about not burning food like potatoes and toast. Doing so produces a chemical called acrylamide, and acrylamide is classified as “probably carcinogenic to humans” by the International Agency for Research on Cancer—perhaps the most widely cited and recognized authority on carcinogens in the world. This campaign is just the most recent iteration of a story that has been circulating since the first study on acrylamide in food came out in 2002.

Cancer Research UK notes that there’s some evidence acrylamide might interact with DNA, and therefore could produce mutations linked to cancer. But human studies have yet to find such a connection. The American Cancer Society says that there’s no evidence that acrylamide intake increases the risk of getting any type of cancer.

But Richard Wender, the Chief Cancer Control Officer at the American Cancer Society, notes that fried potatoes and other crispy carbs do have one link to cancer: “They are full of needless calories and obesity is the second leading cause of preventable cancer in the US, just behind tobacco.”

All of that might seem at odds with what the International Agency for Research on Cancer had to say. The chemical is a probable carcinogen, after all. Countless articles on cancer risks cite the IARC’s official list of potential cancer causes. Even court cases bring up IARC designations as evidence of whether something is or is not carcinogenic.

The Group 2A list where acrylamide resides is just one level below Group 1, which lists known cancer causes and includes things like human papilloma virus (HPV), malaria, insecticides, and working as a petroleum refiner. That sounds scary. It sounds a little less scary when you know that Group 2A also includes being a hairdresser, shiftwork that involves disrupting your circadian rhythm, and very hot beverages. Everything on that list has some evidence that it might increase a person’s risk for cancer, but that doesn’t mean that they all cause cancer in humans.

Acrylamide’s spot on the IARC list comes by virtue of animal studies that showed very high doses of acrylamide to increase the risk of certain kinds of cancer in non-human animals. Those studies suggest that acrylamide is capable of causing cancer in that it could, through some unknown mechanism, cause changes in DNA that result in cancer. Researchers have yet to discover what that mechanism might be, but even if they do someday your toast will probably be considered reasonably safe—assuming you don’t stuff your face with charred bread 24/7.

When rats and mice are given acrylamide to test how carcinogenic it might be, they’re given doses 1,000 to 10,000 times higher than what humans are typically exposed to in food. This is a pretty common way of testing carcinogenicity, because it allows researchers to observe even the tiniest effects. It’s not that the test is faulty, it’s that it’s just not applicable—because most humans aren’t exposed to very much acrylamide. As David Spiegelhalter, a statistician and Professor of the Public Understanding of Risk at University of Cambridge put it, “Adults with the highest consumption of acrylamide could consume 160 times as much and still only be at a level that toxicologists think unlikely to cause increased tumours in mice.”

None of the articles discussing burnt potatoes and toast cited statistics, because human studies haven’t found any increased risk to cite. And even if they had, the numbers are likely to be miniscule. Which isn’t to say that small risks shouldn’t be reported on—they just need to be reported on in a measured way.

Take cookie dough, for instance. It’s the example that Brian Zikmund-Fisher, an Associate Professor of Health Behavior and Health Education at the University of Michigan School of Public Health, used to illustrate the problem. Last summer, the FDA put out a warning that people shouldn’t eat cookie dough, not because of a salmonella risk in raw eggs but because some flour is infected with E. coli. The chances that you as an individual will get such an infection are tiny, even though the consequences could be serious if you happen to be one of the unlucky few.

It would be easy to say that the FDA shouldn’t be scaring people about such a tiny risk, but Zikmund-Fisher disagrees. “The FDA is not wrong for saying that eating raw flour has an incremental risk, but if we’re not talking about recalled flour the absolute risk is very small,” he says, “so the question devolves down to the other parts of this issue. How hard is it to change and what am I giving up?”

In other words, people have to decide for themselves how much they value the experience of eating raw cookie dough. And if acrylamide really does increase our risk of getting cancer by some small amount, people will need to weigh how much they value burnt toast and potatoes.

And in order for folks to make an informed choice, scientists and government agencies and journalists have to communicate the risks clearly. The first step is to include numbers. “People overestimate that they’re going to benefit from a drug if you don’t give them the numeric chances of benefit,” says Ellen Peters, Director of the Behavioral Decision Making Initiative at The Ohio State University. She says that the “biggest difference [in comprehension] is providing the number or not.” In the case of burnt potatoes, there were no numbers to give, but the fact that a risk is communicated at all makes a difference. “There is not a neutral way to present information,” Peters says. “Whatever you choose you’re going to make people view it as more or less risky.”

When there are hundreds of articles a year about all the various things that may or may not increase your cancer risk, you’re likely to ignore many of them—but inevitably some will have an effect on your perception. And over time, those effects add up. It has to do with what risk perception experts refer to as the finite pool of worry. “We can only worry about so much at any given point in time, and when we bombard people with message after message they turn it all off,” Zikmund-Fisher says. “That doesn’t mean that any one piece of it was wrong, but it does mean that this cumulative experience is not optimal.”

All this bombardment makes people focus on the wrong things. “Does the public, fueled perhaps by press reports, give too much weight to reports about specific exposures associated with cancer risk and not enough attention to the proven, major risks for cancer?” Wender of the American Cancer Society says. “I believe the answer is yes. Avoiding all tobacco, exercising, trying to achieve as healthy weight as possible, protecting yourself from the sun, getting cancer preventing vaccines like Hepatitis B and HPV vaccines, being screened for Hepatitis C if you’re a baby boomer, and getting all recommended cancer screens can dramatically reduce your risk for getting or dying from cancer. As a population, if we all followed these steps, cancer risk would be cut in half. Even if we ate burnt toast and the occasional fried potato.”

Or, as Zikmund-Fisher put it, “You don’t need to spend your worry on this one.”