Digestion under a microscope 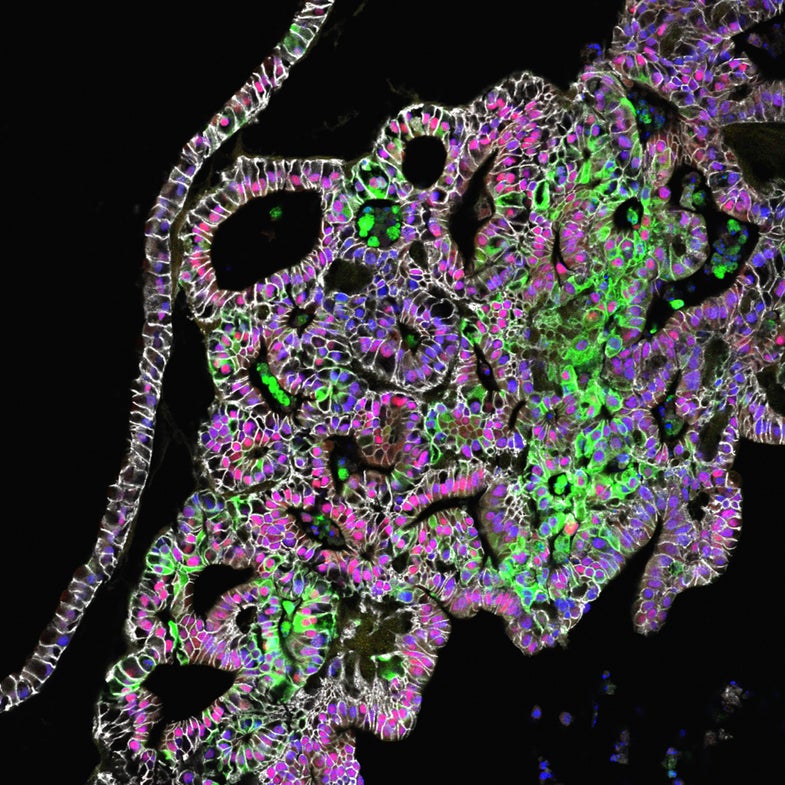 A piece of the human stomach, as seen under a microscope, created in a lab. Cincinnati Children's
SHARE

When scientists want to understand how a drug works, they often turn to mice or other small animals to see how it works in them, then try to relate the results in humans. But a mouse is not a human, and its body functions quite differently. So for a few years now, researchers have been working on a better approach: tiny organs—called organoids—that grow and live inside a petri dish, but function like an actual organ.

This week researchers at Cincinnati Children’s Hospital announced their creation of a working piece of human stomach, complete with the ability to produce acid and digestive enzymes. They say this petri-dish-stomach will help them to better understand how the real thing works—and what exactly happens when things go wrong.

The human stomach has multiple sections, all with different functions. The researchers recreated a section of the stomach called the fundus, which is responsible for producing the acid and digestive enzymes necessary to break down the food we eat. But this vital section of the stomach is also particularly vulnerable to disease. Too much acid can create acid reflux disease, while an infection with the bacteria H. Pylori can cause ulcers and inflammation. By studying how these diseases progress in the stomach tissue, the scientists hope to be better equipped to treat them.

“You can watch diseases unfold under a microscope,” says James Wells, the lead author of the study. But you can also see how the stomach heals itself. When too much acid builds up in the stomach, it often inflames the inner stomach lining. Certain drugs, like Prilosec, treat this inflammation by reducing the amount of acid your body produces. Seeing this healing process in action and what contributes to it, Wells says, gives researchers the opportunity to find new—and potentially better—methods for healing it, whether with drugs or with tweaks to the gut’s microbiome. Their work was published this week in Nature.

This discovery comes two years after the researchers created another area of the stomach, the antrum, which is responsible for producing hormones that perform vital tasks like stimulating appetite. Both mini organs were built using pluripotent stem cells, which are capable of becoming any cell in the body and then replicating.

The ultimate goal for many scientists in this field is to create a “human on a chip”—a credit card-sized device that contains organoids from every organ in the human body. This device could be used to see how new (and old) drugs affect the body as a whole, which could potentially lead to more targeted drug therapies with fewer side-effects.

One day, the same process could be used to grow organs destined for human hosts. “The next real steps for me would be to make these tissues better and more functional to be used in transplantation therapies,” Wells says. The idea would be to replace lost sections of organs like the small intestine, pancreas, or even parts of the heart. But that work is at least a few years down the line. For now, these organoids will earn their keep by helping scientists make our guts a little less mysterious.