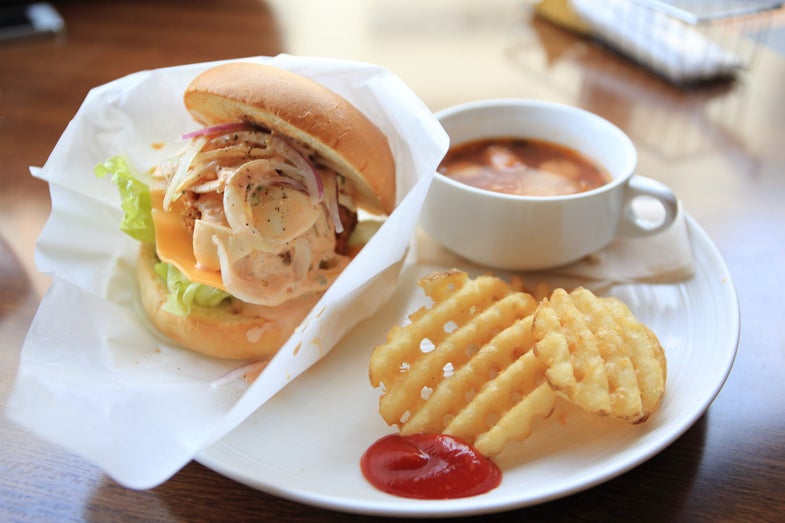 There’s something about the crinkle of a fast food wrapper that triggers a longing for a juicy burger ensconced in a soft bun, the tender drippings of a sliced pork shoulder sandwich, or a melty mouthful of chile de arbol hot sauce wrapped in a velvety tortilla. Most of us realize that the goodies within these wrapper aren’t very good for us, but a new study in the journal Environmental Science & Technology Letters suggests that the packaging itself might be just as perilous.

“These chemicals are very convenient,” said Xenia Trier, a chemist at the European Environment Agency. Trier, who was not involved in this study, researched fluorinated chemicals at her previous appointment at the Technical University of Denmark. “You can use something like paper. If it’s untreated it will soak fat, it will soak water. As such it’s not very efficient as a food container. If you impregnate these food containers with these [chemicals] they get this magic—they work for everything.”

But, Trier adds, “unfortunately we do know they are quite toxic and have been associated with many diseases.”

In humans, “a lot of what we know is based on a community in West Virginia where 70,000 residents were exposed to elevated levels of PFOA,” said Laurel Schaider, an environmental chemist at the Silent Spring Institute and the study’s lead author.

In the late 1990’s, the residents of Parkersburg, West Virginia became the unwilling subjects of a study into the effects of PFOA on humans. The nearby DuPont factory had leaked the chemical into local drinking water supplies for years. A condition of the ensuing legal settlement was the creation of an independent science panel to conduct health impact studies on residents in the area.

The group called the C8 science panel (another name for PFOA is C8) identified cases of kidney and testicular cancers, as well as thyroid disease, as likely being connected to the residents’ exposure to PFOA.

“We couldn’t tell by looking at the wrappers which ones were likely to contain fluorinated chemicals,” said Schaider. So they used a technique called particle-induced gamma-ray emission spectroscopy to test containers for fluorine. PIGE (pronounced piggy) sends a high-energy ion beam at an object. The collision creates photons—x-rays and gamma-rays. By measuring the gamma-rays, scientists can assess whether fluorine is present.

Because this was first time scientists used PIGE for this kind of analysis, the researchers needed to confirm their results. For that they also ran spectroscopy on 20 of the food packaging samples for PFAS using conventional methods.

The advantage of PIGE is that it’s fast and it’s nondestructive—the sample remains intact. The downside is that you need a particle accelerator to run the test. Graham Peaslee, a physicist at Notre Dame (which has a particle accelerator), conducted the analysis. Further, though PIGE can tell you that an item contains fluorine; it can’t tell the specific type, which is also where the spectroscopy came to play.

Older, long-chain fluorinated chemicals like PFOA tend not to break down because they have many carbon fluorine bonds, which are some of the strongest bonds in nature. They’re so persistent, and move around so easily, that even polar bears in the Arctic can have them in their bodies.

In the U.S., a CDC study of more than 2,000 people over the age of 12 found that every subject had fluorinated chemicals in their bodies.

Amidst growing concern, U.S. manufacturers began phasing out PFOA, and other long chain fluorinated chemicals. Yet despite the fact that manufacturers agreed to voluntarily stop using PFOA in 2011, 6 out of the 20 conventionally tested samples tested positive for them.

And many companies are using other, shorter chain fluorinated chemicals in lieu of PFOA—because they don’t persist for as long in the body.

But, said Schaider, “We have less information on their potential health effects.”

“40 to 60 percent is exactly what I’ve found over and over again [in my own research],” said Tier.

Schaider’s study didn’t assess whether or not fluorinated chemicals migrate from the packaging into the foods we eat. But even if they don’t, she cautions, their full lifecycle is worrisome.

As Parkersburg has shown, people can be exposed to these chemicals just by living in the communities where they’re produced. And we usually toss wrappers in the trash, where they end up in landfills— so chemicals could be leaching into ground water. Some landfills treat their liquid waste, but waste water treatment facilities are not adept at filtering out fluorinated chemicals.

And as cities roll out composting as a way of reducing waste, “we think of throwing our paper wrappers in—they’re compostable,” said Schaider. “And now you have these highly persistent chemicals that don’t break down mixed in with your compost that we then use in our gardens or in areas growing food crops.”

“One of the important lessons from the studies in Denmark is that it is possible to find alternatives,” said Trier. “Even the most typical one, microwave popcorn, there was a Danish retailer that put pressure on their suppliers. You could find an alternative that cost one cent more per bag. It was nothing.”