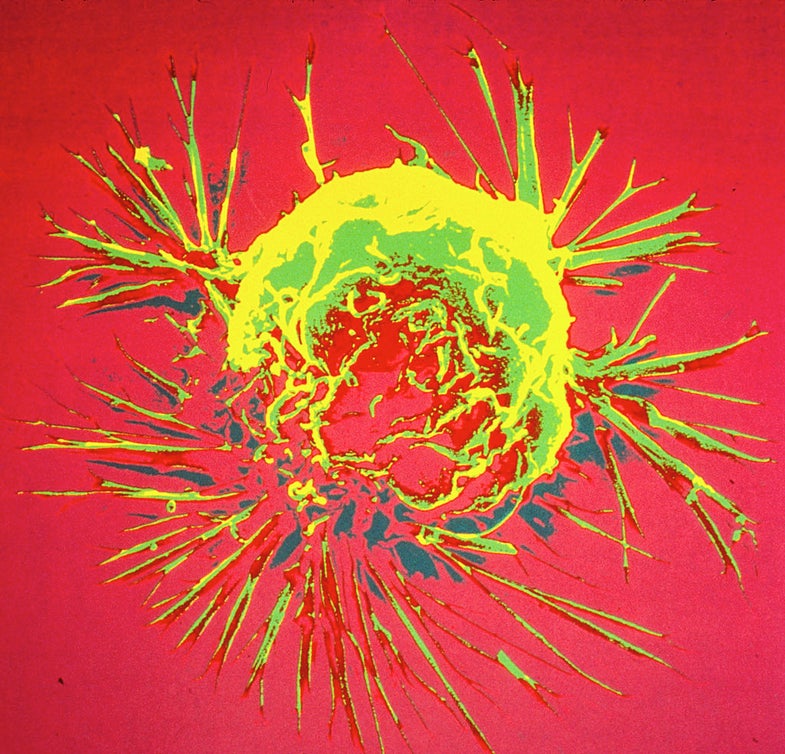 Humans have forever questioned what causes human cancer. And we’ve come a long way: Early theories proposed by Hippocrates in the middle ages suggested the disease arose from supposed “black bile” accumulating in the body. This and other subsequent theories—like cancer cells themselves as infectious, contagious agents—have been debunked by modern research. Scientists now understand cancer arises from mutations created in our DNA when cells replicate and three factors cause those mutations: Environmental, hereditary, and random ones. However, the influence of one of those factors over another is still largely unknown.

Now, a group of researchers at The Johns Hopkins University used new statistical models to figure this out. After analyzing 32 common cancer types, the researchers estimate that 66 percent of cancer mutations are from random ones that occur when cells divide, 29 percent from environmental factors, and 5 are inherited. This means that for people with these cancers, about two thirds of all mutations that eventually result in cancer happen not because of factors in their environment or what they inherit from their parents, but rather as a direct result of how healthy cells grow and divide. The geneticists say researchers should use this new understanding to focus more efforts to detect and treat cancer as early as possible.

Cell division, in which one cell breaks apart into two cells in an effort to create new, needed healthy ones, is a natural process. But as this occurs, random mutations happen to the DNA within the cells. Other factors can cause these mutations, too. Environmental ones like smoking or eating a diet low in fiber increase the rate that these errors occur. When enough of these mutations accumulate—no matter what their cause—that’s when the cells begin dividing uncontrollably. That uncontrolled division is what we call cancer.

The researchers wanted to know how much of an influence each mutation-causing factor had on the occurrence of cancer. For 32 cancer types, they pulled together medical information from patients around the world, including those patients’ DNA sequences, information about their lifestyle, and what type of cancer they had. They combined these data sets to understand the influence of each mutation factor. Here’s how one analysis, for lung cancer, would go: Researchers already know the average number of random mutations that happen to an otherwise healthy person who eats well and never smokes. Say that number is 100. From those data sets, and from previous research, they found smokers have cell mutation rates that are three times higher than healthy, non-smokers. So you would expect to find 300 mutations in smokers. So, probabilistically, you can attribute that extra 200 to smoking. They did a similar analysis for 31 other cancers by comparing the mean number of mutations from healthy individuals to mutations attributed to known environmental and heritable causes of those cancers.

Comparing the 32 types of cancers further demonstrated the effect random mutations have. Cancer is more common in tissues that divide often. For example, cells in the colon divide much more frequently than cells in the brain, which is why colon cancer is much more common in the population than brain cancer is. But overall, the numbers they got—66 percent random, 29 percent environmental, and 5 percent inherited—told the researchers that a majority of cancers occur from random, unpredictable “mistakes” that can’t be predicted.

It offers comfort to the millions of patients who have developed cancer but have led near perfect lives, says Bert Vogelstein, a co-author of the study and professor of pathology and oncology at Johns Hopkins. “We want it to help people avoid feeling guilty about their cancers. These cancers would have occurred not matter what they did.” The researchers say the results could also help guide future research: Understanding how to recognize cancer early on, when its first developing, could offer a better chance at successfully treating it.

So is there anything we can do to slow down, or even completely eliminate these random mutations? Right now, the researchers say most are unavoidable, but it may be possible that some of them could become avoidable in the future. There are four ways that cells randomly mutate during cell division. One of them, called reactive oxygen species or “free radicals” could theoretically be reduced by exposing cells to special antioxidants. Vogelstein says a better understanding of these mutations could open up areas of research to develop these kinds of antioxidant preventative therapies. “It’s similar to our understanding of cholesterol,” Vogelstein says. “Before we knew about cholesterol, we didn’t know we could try to lower it to prevent cardiovascular disease.”

And perhaps this type of research couldn’t come soon enough. The researchers think that in the future, as populations continue to age, the percent of cancer cases attributable to random mutations is only going to increase. As bodies get older, their cells will have experienced more division, which increases the chances of mutations and cancer. Vogelstein says the way we are going to keep up with this increase is finding better ways to detect cancer in its early stage.