The balance of microbes can change your susceptibility 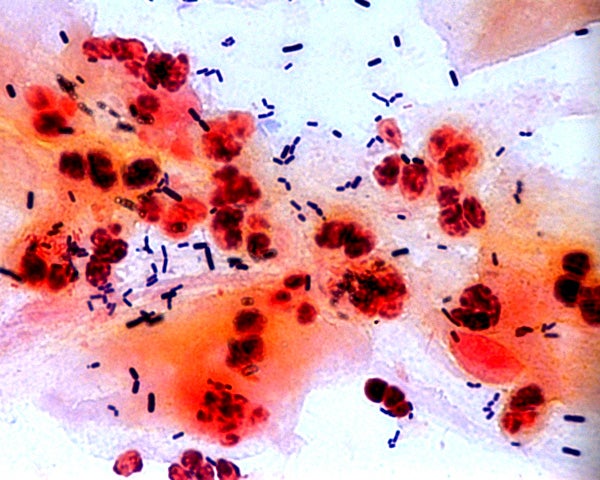 Lactobacilli from a vaginal swab. Traditionally, scientists have considered healthy vaginal microbial communities to be those dominated by this type of bacteria. Melis Anahtar
SHARE

Scientists are just starting to figure out how the bacteria that live in, on, and around us can influence our health—and the vagina remains one of the most mysterious human microbiomes. Now, research suggests that certain vaginal bacteria can actually their hosts more vulnerable to HIV.

In a study published Tuesday in the journal Immunity, scientists sampled bacteria from the genital tracts of young, healthy women in South Africa and followed those women over time. Women whose bacterial communities were dominated by microbes known to cause inflammation were four times more likely to get HIV than those who hosted bacteria traditionally associated with a healthy vaginal microbiome.

Researchers typically consider a genital tract healthy if it’s heavily populated by Lactobacillus crispatus, a type of bacteria that calms inflammation (some members of the Lactobacillus group are also found in the gut or fermented foods such as yogurt). This idea comes from studies mostly done on white women in developed countries, though, and those results might not hold true for everyone.

“Healthy young women in this African community that we’ve been studying have much more diverse [bacterial] communities within their genital tract,” says coauthor Douglas Kwon, an immunologist at the Ragon Institute in Cambridge, Massachusetts. Some of these bacteria cause genital inflammation, he and his colleagues reported in 2015.

For the new work, the team followed 236 women enrolled in a poverty-alleviation program. Only about 10 percent of these women had a Lactobacillus-dominated vaginal microbiome. Others had more diverse bacterial communities. Their genitals also carried more active white blood cells. When Kwon and his colleagues transplanted the bacteria species found in non-Lactobacillus-dominated microbiomes into mice, the animals soon sported more of these cells as well.

Once roused, these sorts of white blood cells (called CD4+ T cells) can alert other immune cells to danger. You might think that would be a good way to prevent HIV—it gives the body more soldiers for fighting off invaders. But unfortunately, HIV actually infects these immune cells.

“If you have more of these cells there, and they’re more activated, there’s essentially more fuel for the fire, so that when a spark lands there’s more chance of it catching,” Kwon says.

Sure enough, the team found that the study subjects with more diverse vaginal microbiomes had a higher risk of HIV infection. “Not only do they have more inflammation, but they’re actually acquiring HIV at fourfold rates over women who have the sort of Lactobacillus-dominant, ‘classically healthy’ vaginal communities,” Kwon says.

It’s unclear why some vaginas—all of them apparently healthy—host more diverse bacterial communities than others. “It wasn’t linked to anything like sexual behavior or demographics—like the age of the women, the number of boyfriends, [or] the type of sex that they were having,” Kwon says. Genetics or diet may play a role, he says, but research hasn’t supported those links yet.

Sub-Saharan Africa, where the women in the study lived, has been more severely affected by HIV and AIDS than any other region in the world. If diverse vaginal microbiomes can be shifted to become Lactobacillus-dominated, women could become less susceptible to HIV. “They might reduce inflammation and thereby reduce HIV acquisition in women,” Kwon says. “We don’t think, obviously, that is absolutely protective, but clearly it seems to impart less risk than having these more diverse communities.”

This will be tricky, though—research on the gut suggests that a person’s regular microbiome tends to bounce back after any sort of interference.

However, many techniques for mitigating HIV risk—such as using condoms, asking a partner to get tested, or limiting sexual partners—aren’t entirely in women’s hands. “Oftentimes they’re financially dependent on their male partners who are putting them at risk.” Kwon says. “That has been a real motivator in terms of trying to understand the biology [of HIV transmission], to create new biological interventions to help these women take control of their risk.”