"The ship was lost due to an inability to extinguish the fire." 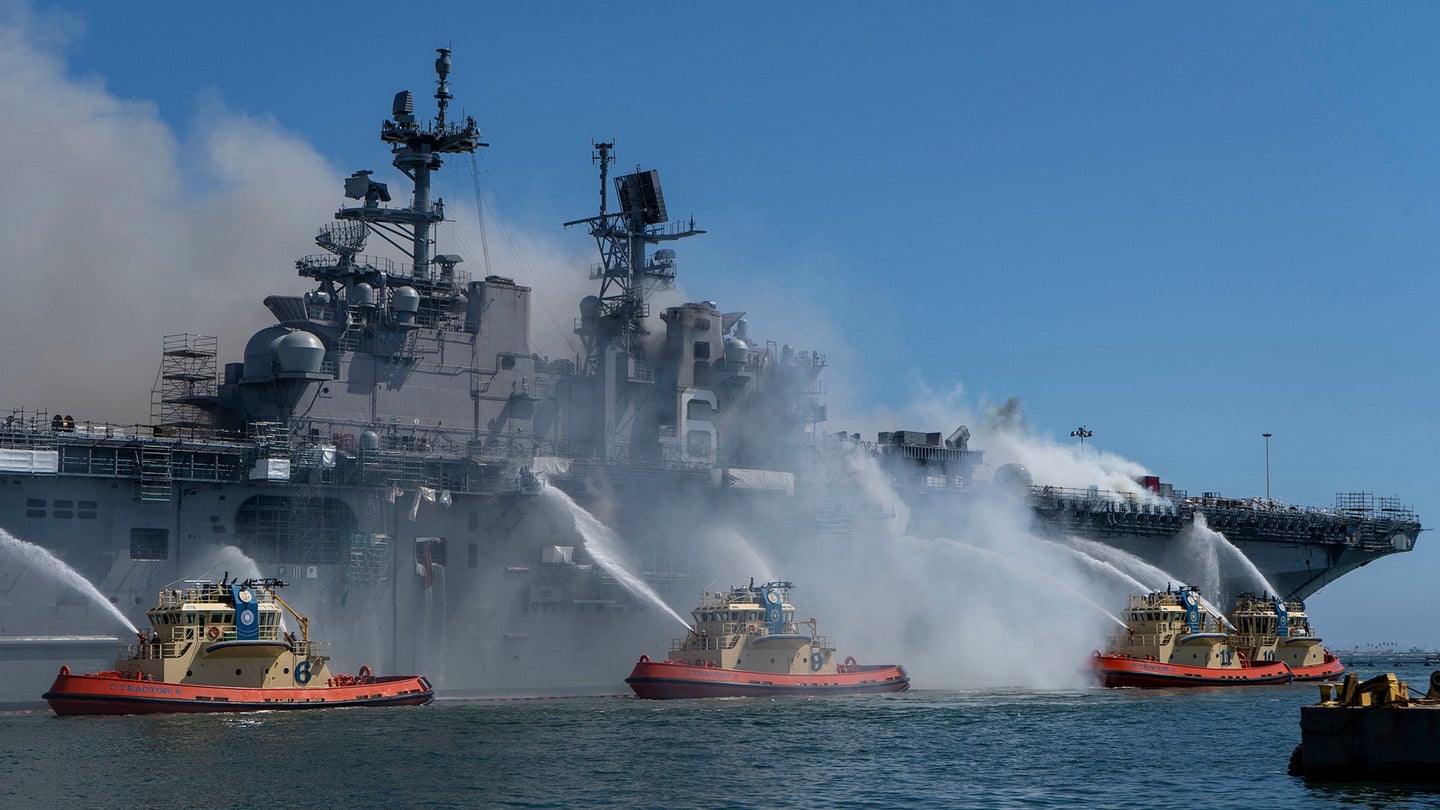 The Navy sailor who set the 2020 fire on the USS Bonhomme Richard submarine will be going on trial next month. Mass Communication Specialist 3rd Class Christina Ross/U.S. Navy
SHARE

The sailors aboard the amphibious assault ship USS Bonhomme Richard had no idea what to do when a fire broke out aboard their vessel last year, an investigation into the catastrophic blaze found.

“Although the fire was started by an act of arson, the ship was lost due to an inability to extinguish the fire,” according to the investigation, which was written by Vice Adm. Scott Conn, then-commander of Third Fleet.

The ship caught fire on July 12, 2020 and burned for five days, spreading to 11 of the vessel’s 14 levels. Seaman Apprentice Ryan Sawyer Mays, a member of the ship’s crew, has been accused of starting the fire that destroyed the $2 billion warship. He is scheduled to appear in court on Nov. 7, his attorney told Task & Purpose.

But the Navy’s investigation into the fire found that the Bonhomme Richard’s crew was ill-prepared and under-trained to contain the fire once it broke out.

“Once the fire started, the response effort was placed in the hands of inadequately trained and drilled personnel from a disparate set of uncoordinated organizations that had not fully exercised together and were unfamiliar with basic issues to include the roles and responsibilities of the various responding entities,” reads the investigation.

However, the investigation makes clear that responsibility for the ineffective firefighting effort begins at the top.

“Ineffective oversight by the cognizant commanders across various organizations permitted their subordinates to take unmitigated risk in fire preparedness,” the investigation says. “A significant source of this problem was an absence of codification of the roles and responsibilities expected by each organization in their oversight execution.”

On the morning of the fire, 87 percent of the Bonhomme Richard’s fire stations “​​remained in inactive equipment maintenance status,” the investigation found. This hampered the crew’s initial efforts to contain the blaze.

“Because the nearest shipboard fire stations had cut or missing hoses that were not corrected through routine maintenance checks, these teams were unsuccessful locating a serviceable fire station and hose and they did not adapt their strategy in light of these conditions,” the investigation found.

Moreover, no one attempted to use the Bonhomme Richard’s foam sprinkling system to extinguish the blaze because it had not been properly maintained and “in part because the crew lacked familiarity with capability and availability,” the investigation determined.

The investigation also found that several sailors, including chief petty officers, decided not to don their firefighting gear because they thought they were wearing the wrong uniform at the time, according to the investigation. That stopped those sailors from joining the firehose teams that were trying to fight the fire.

“This lack of knowledge and preparation affected overall readiness and response, which contributed to the fire’s spread and inability to contain it,” the investigation found.

The systemic problems with the ship’s firefighting efforts became apparent shortly after the blaze broke out in the ship’s lower vehicle stowage area around 8 a.m. on July 12. The fire eventually consumed the entire vessel after “all initial firefighting actions proved futile,” according to the Findings of Fact included in the Navy’s investigation into the fire.

Roughly 10 minutes passed after smoke was seen rising from the lower vehicle storage area before it was reported. The investigation notes that these “precious early minutes were lost for various reasons,” from the fact that sailors were forced to use cell phones to communicate because they lacked radios, to the decision by the officer of the deck to order further investigation before taking decisive action, and because “there was a lack of urgency.” Communication was further hampered because the Bonhomme Richard’s 1 Main Circuit — essentially its PA system — did not work in many areas of the ship.

The officer of the deck at the time said he initially didn’t make an announcement about the fire because he thought the smoke could have been coming from an emergency generator or some other benign source, the investigation found. Other sailors told investigators that they thought they had to actually see the fire before declaring an emergency.

It was nearly an hour before the first firefighters were in a position to try to extinguish the fire with water, but they were running so low on air that they had to leave after a few minutes and no one replaced them, the investigation determined.

At 9:44 a.m. power to the ship’s aft section was switched off, likely because the command duty officer thought the blaze was an electrical fire, according to the investigation. As a result, the ship’s only remaining fire pumps were taken offline, leaving the vessel’s firemain and foam sprinkling system non-functional.

After more than two hours of firefighting efforts, during which time none of the ship’s installed firefighting systems were deployed, the order was given for all remaining firefighters to begin withdrawing. Less than five minutes after the last firefighter made their way off the Bonhomme Richard, a “major explosion rocked the ship, blowing debris across the pier and knocking down firefighters and sailors,” according to the investigation.

“Subsequent attempts to regain a foothold aboard relied on ad hoc strategies, delivering too little firefighting agent to combat the pace of the fire’s spread,” reads the investigation. “Throughout the first day of efforts, agent was never applied to the seat of the fire, and the opportunity to do so was lost once the fire spread beyond the perimeter of Lower V and across the entire ship.”

It would be several more days, with renewed firefighting attempts, before the blaze was finally put out on July 16, 2020.

A separate review into major fires aboard Navy vessels found that the service has been focused on training sailors to extinguish blazes that happen when they are at sea and have a full crew along with all their leaders and equipment onboard, said Rear Adm. Paul Spedero Jr., head of Joint Enabling Capabilities Command, U.S. Transportation Command.

“Where we’ve missed the opportunity is those high-risk situations in the maintenance environment or in the pierside environment, where we have reduced manning and off-hours, or we have equipment that is unavailable due to maintenance, or equipment that has been moved to support other maintenance during these availabilities,” Spedero told reporters during a roundtable on Wednesday.

That’s why the review into major fires includes recommendations for how the Navy trains sailors to conduct damage control when their ships are undergoing maintenance, he said. Commanders have already required sailors to undergo a certification process before their vessels go through a maintenance period so that they understand the risks they will face and how to address them.

Editor’s note: This story was updated on Oct. 20 with comments from Rear Adm. Paul Spedero Jr.