The US Navy launched a missile from a ghost ship. Wait, what?

The uncrewed ship is called the USV Ranger, and it's part of the Ghost Fleet Overlord program. 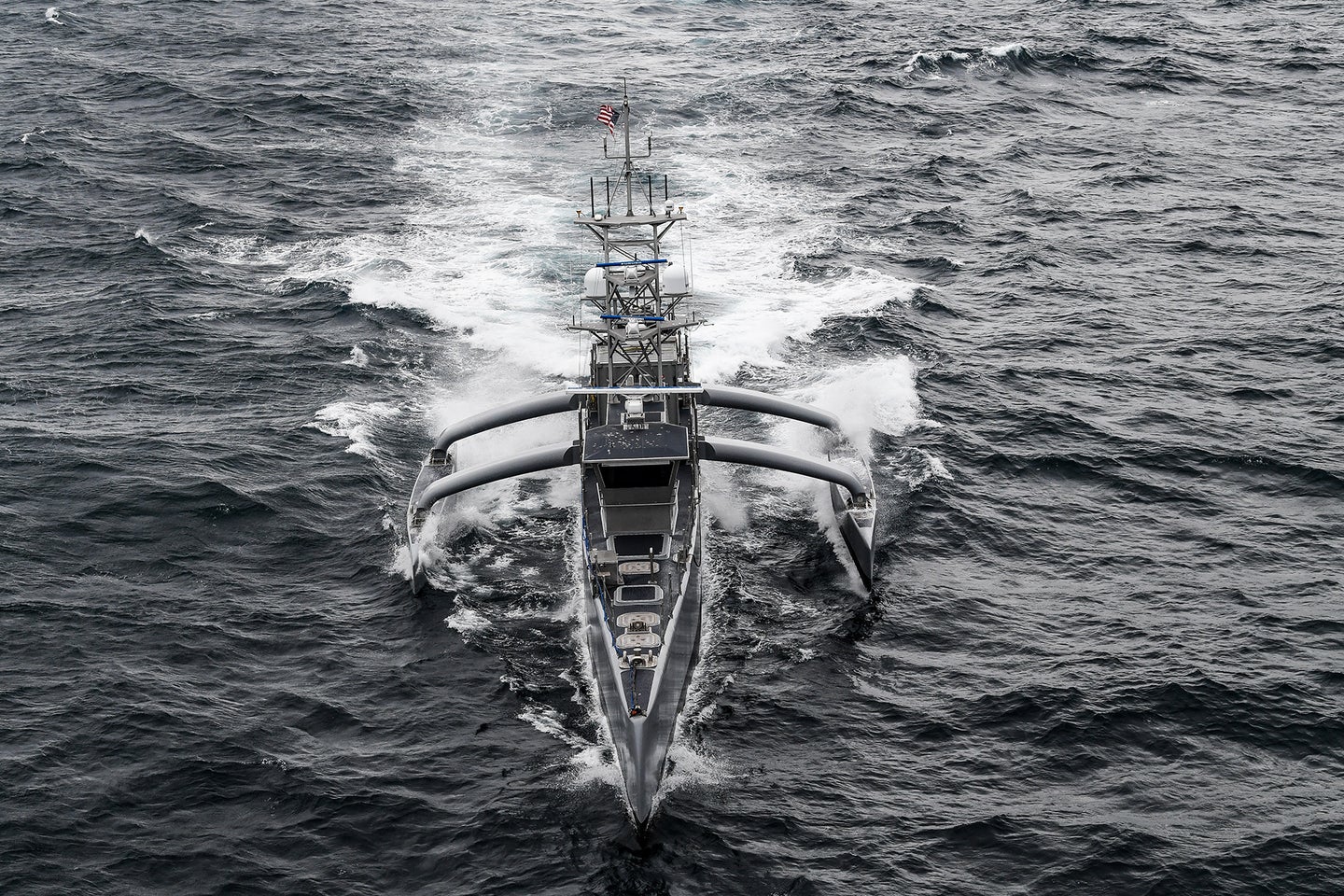 A different uncrewed surface vessel in an exercise in April, 2021. Shannon Renfroe / US Navy
SHARE

A video shared by the Department of Defense last week shows an uninhabited ship, the USV Ranger, successfully firing an SM-6 missile.

The uncrewed surface vessel Ranger is one of at least two robot ships that the Navy uses to test autonomy, in collaboration with the Department of Defense’s Strategic Capabilities office. Testing these ships, from autonomous travel to operations alongside other vessels, is part of the ominously named “Ghost Fleet Overlord” program.

As a program, Ghost Fleet Overlord dates back to at least 2017. And while the USV Ranger’s operating systems are all advanced technology, the actual body of the ship is a commercial model. Alongside USV Nomad, USV Ranger is a repurposed commercial fast supply ship, or the kind of boat used to regularly and quickly bring deliveries to oil rigs.

In the video, above, it is hard to tell that Ranger has no people on it. Its radars still spin, its small body rocks gently with the waves, and at a remote signal, a missile launcher stirs from inside a nondescript container. In seconds, the robot raises its weapon, and hurls an explosive into the sky above the sea. Only an astute observer, primed to the fact, would notice that there is no crew behind the windows of the ship’s bridge.

Like human sailors in the Navy, robot ships must follow the Law of the Sea Convention, a set of rules and practices agreed to by the United Nations, despite the fact that the US has yet to ratify the treaty. Virtually all other sailors follow these rules at sea. For peaceful maritime travel, it’s important for sailors to know the rules of the road, but for robots those rules have to be coded into how they operate.

Firing a missile falls well outside the scope of peaceful oceanic transit. It is a way for the humans remotely monitoring and commanding the ships to see if the command links are secure, timely, and if the robot vessel can perform as expected. Testing if the ship can launch a missile is the first part of the work of making an armed robot ship. The harder challenge is testing if that robot can fire a missile in such a way that it hits a target.

How the missile launchers integrate with sensors and how those sensors communicate information back to off-ship human overseers is a big question. Where in the process a human approves a robot’s target selection, and if the human can instead decline the attack, are important considerations for human control over the entire process, and to mitigate error.

In October 2020, Ranger had traveled from the Gulf of Mexico to the west coast of the United States, transiting autonomously every part of the way except for the Panama Canal, when it was required to have a human crew. Nomad, its sister ship, completed a similar transit this summer.

“The Ghost Fleet Overlord program is part of an effort to accelerate the Navy’s push to incorporate autonomous vessels within its fleet to better expand the reach of manned vessels,” C. Todd Lopez of DOD News wrote in January 2021. “Autonomy includes more than just straight-line passage through large areas of the ocean; it also involves such things as collision avoidance and following the rules of the sea.”

Because Ranger and Nomad are built on top of existing, familiar, durable ship designs, the focus in testing can be less about the specific engineering of these robotic vessels, and more about how the robotic components work together. By incorporating a familiar missile launcher into that overall package, the Navy can see if a kind of plug-and-play approach works. This is especially important because the next two vessels planned for the Ghost Fleet Overlord program are going to be original prototypes.

“The SCO Ghost Fleet Overlord program serves to inform Navy prototype efforts by integrating mature technologies to accelerate Service priorities and is a key piece of the build a little, test a little, and learn a lot philosophy articulated in the Navy Unmanned Campaign Framework,” said Strategic Capabilities Office Director Jay Dryer, after Nomad transited from the Gulf to the Pacific Coast this summer.

Two dedicated robot prototypes are already under construction for the Navy, to be used in future tests. Both Nomad and Ranger are headed to the Navy from SCO later in 2022, for further experimentation.