Those who cover the militarized aspects of the ocean eventually will encounter a group of people who want the U.S.... 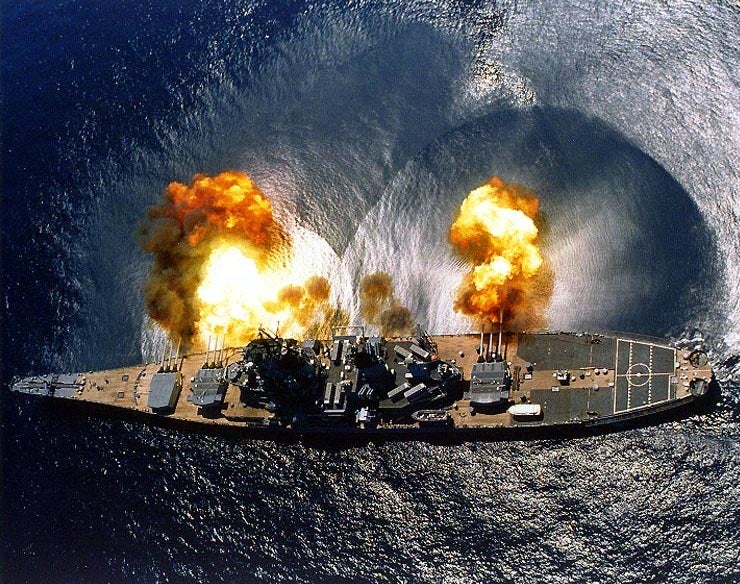 Those who cover the militarized aspects of the ocean eventually will encounter a group of people who want the U.S. Navy to get back into the battleship business.

The argument goes like this: The four remaining World War II Iowa-class battleships are cheaper to operate, cheaper than building new ships, and provide powerful and much-needed weapons (giant 16-inch guns—that’s the diameter of the shell, not the length of the barrel) to the U.S. arsenal.

(The 2012 summer movie spectacular Battleship may have reinvigorated some of the calls to reactivate the big ships following the glorious montage of the USS Missouri coming to life to fight maritime aliens).

Before killing the buzz of why bringing back the Iowa-class ships doesn’t make sense, let’s take a quick history tangent.

The modern armored ship entered popular American culture with the 1862 ironclad battle between the Union’s USS Monitor and the Confederacy’s CSS Virginia (often referred to by its Union moniker Merrimack).

The shootout was a draw, but it emphasized an ongoing European trend of combining a steam engine (which unshackled navies from the tyranny of the fickle wind) with heavy iron armor to protect the crew and the ship.

French ironclads had tangled with Russian artillery positions during the Crimean War and the French and the Britain’s Royal Navy had begun building armored ships when the Civil War broke out, according to this pretty great piece in Naval History magazine.

Armored ships with increasingly larger guns became the measure of international military might at the dawn of the 20th century.

A mere 44 years after the Monitor and the Virginia duked it out, the Royal Navy commissioned in 1906 what could be the first modern battleship—HMS Dreadnought.

Dreadnought was fast, had great range and bristled with 12-inch guns designed to punch holes in other armored ships. The ship cemented the definition of battleship as a ship with very large guns and very heavy armor. (It’s difficult to call any modern naval vessel a battleship since most do not meet the large guns and armor criteria, though they are ships and do engage in battle).

The iconic fleet action of World War I—the Battle of Jutland in 1916 between the Royal Navy and the German navy in the North Sea— wasn’t the first battleship fight, but it did more to define the age of the battleship than any other.

The ships of the day required line-of-sight position relative to their target to be effective, and they needed to stay close together; radios of the era weren’t reliable enough to coordinate formations of dozens of ships.

Jutland—which didn’t have a clear definitive winner—showed both the Germans and Royal Navy how quickly technology evolved; relatively young ships were rendered obsolete with new types of armor, guns and propulsion.

The size, crews, and speeds of battleships increased up until World War II, when the battleship concept largely plateaued.

Think of the Iowa-class battleship and its peers as the best technological expression of hundreds of years of naval warfare—requiring ships to operate and fight over short distances—before the next leap.

The attack at Pearl Harbor and the Battle of Midway were built on the projection power of the aircraft carrier. Midway pitted the numbers of ships at Jutland over an area several times larger than the battle space of Jutland. Major naval battles were not direct ship-on-ship conflicts, but were fought via aircraft having ranges that existing naval guns could not hope to approach.

World War II gave the world’s navies a crash course in the next phase of war at sea. The pointy end of the spear became aircraft, guided weapons (missiles and torpedoes) and submarines—not the guns on board a ship—thus largely ending of the utility of the battleship in the open ocean.

However, American battleships retained their usefulness for a few more decades.

The 16-inch guns of the four Iowa-class vessels remained highly effective as sea-based artillery for targets on distant shores. With a range of just over of 20 miles, those battleships could throw shells over the horizon to support ground troops ashore, right up to 1990s Operation Desert Storm (with several interruptions when the ships were mothballed for decades at a time).

In 1992 the four ships were decommissioned for the last time and eventually became museum ships (the Missouri in Honolulu; the Iowa in Los Angeles; the New Jersey in Camden, N.J.; and the Wisconsin in Norfolk, Va.).

The naval artillery role is the prime argument that battleship supporters make for bringing the ships back.

They have a point. U.S. Marines have long advocated for more naval gunfire support from the sea for forces ashore.

At the moment the Navy’s answer is the futuristic Zumwalt-class guided-missile destroyer. Its hallmark is twin 155mm naval guns that launch a guided projectile more than four times the 20-mile range of the 16-inch guns of the old battleships.

The Navy is building just three Zumwalts after the Pentagon determined the ships—at more than $3 billion a copy—were entirely too expensive.

But the Iowas aren’t necessarily the naval artillery answer for the Navy for two important reasons (though there are a lot more) —people and “dumb” weapons (as opposed to guided, or “smart” weapons).

People are the most costly expense for the military, and the Navy has been on a campaign to reduce the numbers of sailors. Zumwalts call for a crew of fewer than 150, whereas in its 1992 configuration, the New Jersey required a crew of almost 2,000 sailors. Except for Nimitz-class aircraft carriers (with compliments of about 3,200) no ship in the U.S. Navy approaches that many crew.

More important, the shells from the battleships are unguided. Even with a talented gunner the accuracy of the ship’s main guns was only about 32 percent at nine miles against a battleship-size target, according to a Naval War College study during World War II.

For ground targets that could shells striking hundreds of yards away from the intended point of impact.

(To be fair, during the battleships’ last hurrah in the 1980s and early 1990s, improvements to the Iowa-class guns were paired with a radar system to increase the accuracy. Noncombat tests saw hits with in 150 yards of a target at a range of about 19 miles).

In the modern era of guided weapons, the margin of error for those old 16-inchers is too high to justify the cost and the trouble of getting the battleships back to sea.
There are, of course, a host of other issues that make reactivation of the Iowas impractical—parts, training and maintenance among them.

Other than the best part of a lousy movie, the future of battleships are better left to museum curators or science fiction.