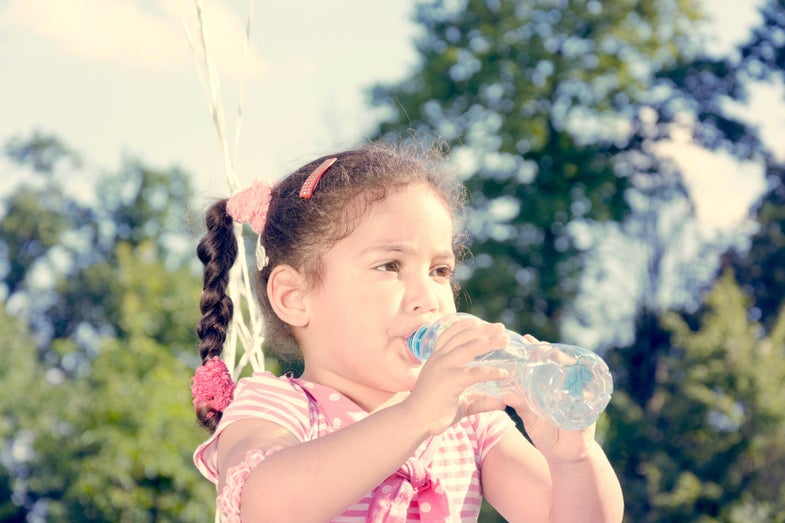 The Trump administration’s Zero Tolerance Policy, which prosecutes asylum seekers and people trying to illegally cross the U.S. border, sparked a growing public outcry that led the president to sign an executive order to keep detained families together.

By then, more than 2,000 immigrant children had already been removed from their parents as a result of the policy implemented in early May. Not only does the forcible separation itself cause what the American Academy of Pediatrics calls “irreversible harm,” but children as young as 18 months were then held in “tender age” shelters where caretakers were instructed not to hold or comfort children in distress. Some detention centers run by contractors even used powerful antipsychotics on children without first seeking their parents’ permission.

And as the Department of Defense begins housing detainees on military bases, the children could face yet another health risk: contaminated drinking water.

Water contamination by a group of toxic, man-made chemicals known as poly- and perfluoroalkyl substances, or PFAS, is a problem especially on military bases. The military uses PFAS-based foams to quickly douse fires as part of their training exercises. And according to recently released reports on the safety of the chemical, even places deemed safe may actually have toxic water—which would be more hazardous for children than for adults living and working on the base.

These chemicals, also used in non-stick pans and flame-retardant carpets, have been linked to health problems including an increased risk of liver, kidney, and thyroid problems, certain types of cancers, infertility in women, and developmental issues in fetuses and infants. Children are particularly vulnerable to PFAS chemicals, which can decrease the body’s ability to produce disease-fighting antibodies after vaccination.

An unnamed official from the Department of Health and Human Services told the Washington Post last month that the agency was planning to visit four military bases to assess their suitability as detention centers. U.S. Defense Secretary Jim Mattis confirmed June 25 that two military bases in Texas, Fort Bliss and Goodfellow Air Force Base, have been approved as detention centers.

The Sierra Club found at least five military sites with PFAS contamination that have been reported to be under consideration by the Defense Department for use as a detention center for children. Holding children on bases with drinking water potentially contaminated by toxic compounds would “compound the tragedy of [Trump’s] immigration policy,” says Sierra Club Executive Director Mike Brune in a statement calling attention to the issue.

The Environmental Protection Agency has collected some data on PFAS levels in drinking water systems across the country, including for Fort Bliss and the Goodfellow Air Force Base. According to EPA data, neither site tested positive for PFAS contamination, but that doesn’t mean there aren’t contaminants present, says Xindi Hu, a post-doctoral fellow in environmental health at the Harvard T.H. Chan School of Public Health. Instead, a negative result means that PFAS isn’t present at levels above the EPA’s detection limits.

Furthermore, there’s evidence of health risks associated with exposure of PFAS at levels below the detection limit, including a muted immune response and delayed neural development in young children, Hu says. A recently released government report from the U.S. Centers for Disease Control and Prevention suggests that PFAS standards for drinking water should be set at 7 to 11 parts per trillion. That’s about three to four times lower than the EPA’s detection limit and about seven to ten times lower than the EPA’s recommended health advisory.

The report was so damning that it was called a “public relations nightmare” by the Trump administration, which tried to suppress its publication. The CDC uploaded the report to the agency’s website in June after bipartisan calls for its release.

The Department of Health and Human Services, which includes the CDC, said in an emailed statement to Popular Science that in addition to the two military bases named by Mattis, Dyess Air Force Base in Texas is also being evaluated as a potential temporary shelter for unaccompanied children. The city of Abilene, TX, about seven miles away from Dyess Air Force Base, tested positive for several types of fluorinated compounds in their drinking water, according to EPA monitoring data.

Health and Human Services, which decides whether evaluated sites should be used as holding centers, did not respond when asked by PopSci whether the agency takes into account PFAS contamination when deciding whether military bases are suitable homes for children.