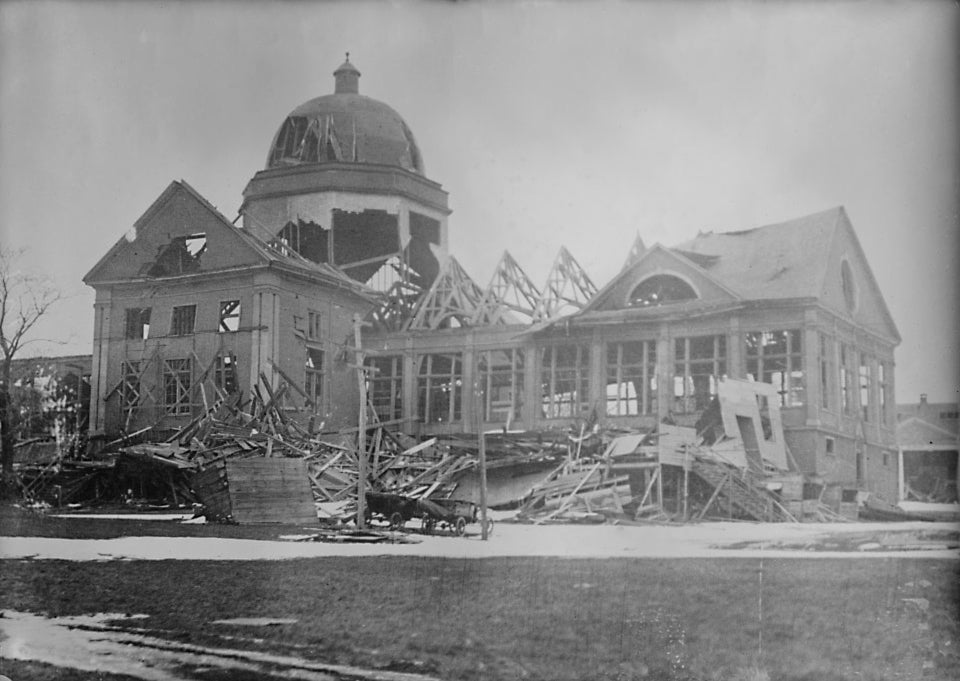 One hundred years ago, a massive explosion rocked Halifax when a ship—the Mont-Blanc—carrying six million pounds of explosives caught fire in the harbor. The following is an excerpt from THE GREAT HALIFAX EXPLOSION: A World War I Story of Treachery, Tragedy, and Extraordinary Heroism by John U Bacon. It describes the deadly first seconds of the blast.

At 9:04:35 a.m., while firefighters and crews from other ships battled the blaze, the fire on Mont-Blanc either penetrated the magazines storing the TNT and picric acid or finally nudged the temperature in the cargo hold just past the 572-degree-Fahrenheit threshold needed to detonate picric acid. Regardless, the result was the same.

The instant Mont-Blanc’s cargo ignited, it started a chemical chain reaction an immense string of dominoes knocking the next one over in rapid succession, with each domino self-contained microscopic bomb that is the molecule of a high explosive.

To try to grasp the magnitude of this unprecedented explosion, Robert MacNeil offers this simple comparison: when a rifle is fired, one ounce of explosive powder in the shell burns rapidly, fomenting hot gases. These gases expand, forcing the bullet out of the shell—and in a hurry. Mont-Blanc held the equivalent of 83 million ounces of gun powder, which did collectively what one rifle shell does, with 83 million times more force, shooting out in all directions at once.

The detonation itself took one-fifteenth of a second, five times faster than the blink of an eye. The epicenter of the explosion instantaneously shot up to 9,000 degrees Fahrenheit, about six times hotter than molten lava.

The explosion started in the gigantic steel casement of the cargo hold, which had been packed tight and was far too small to contain such an exponential expansion. The blast shot outward in all directions at 3,400 miles per hour, or four times the speed of sound. It tore through the ship’s steel hull like wet tissue paper, converting the vessel into a monstrous hand grenade. The heat vaporized the water surrounding the ship and the people trying to tie her up and put out the fire. The remains of these victims were never found because there were no remains to find.

Small chunks of metal from the ship crashed through roofs, punctured other ships, and killed and maimed people both nearby and hundreds of yards away. Retired fireman John Spruin, the man who had heard the fire alarm, put on his old uniform, and driven his horse-drawn pumper to the site, was ripped apart by shrapnel and killed instantly.

Mont-Blanc disintegrated, leaving only two recognizable parts: the anchor shank, which weighed half a ton and was found 4 miles away in the woods of the Northwest Arm; and an iron deck cannon, intended to protect the ship from U-boats, which landed 3 miles away in Little Albro Lake behind Dartmouth, with its barrel drooping like a warm candle.

The explosion also produced something we recognize all too readily today: a mushroom cloud. The extremely high temperatures involved created a gas fireball filled with vaporized particles of the ship, the cargo, oil, coal, and humans, skyrocketing directly upward to form the stalk of the cloud, which rose 2 miles into the air. When the blistering-hot debris reached its zenith, they cooled, slowed down, and spread out, making it look something like a mushroom cloud, though it lacked the perfect symmetry nuclear bombs produce.

The cloud was so big and thick that it made it seem as though dusk had arrived at 9:05 a.m. When the cloud could no longer hold the particles, it started shedding the oil and debris, which changed the color of the cloud from black to white.

This attracted the attention of observers miles away, who were often unaware of the cloud’s significance. Rear Admiral B. M. Chambers, who was saying good-bye to his wife outside their home near the Royal Artillery Park on the south side of the Citadel, heard the explosion and looked toward the Richmond docks. He noticed, “there, right in front of the house . . . was rising into the air a most wonderful cauliflower-like plume of white smoke, twisting and twirling and changing color in the brilliant sunlight of a perfect Canadian early winter morning.”

Another wrote to an American friend, “The smoke cloud following the explosion was a wonderful spectacle and for a few minutes we never realized the seriousness of it.”

The seriousness was clear enough to those beneath it. When the cloud released its contents—including the carbon by-products of the explosion, the fragments of bunker coal, and the steel pieces and particles of Mont-Blanc itself, plus tons of oil and airplane fuel—it created what witnesses described as “dark rain.” But anyone caught underneath the fallout could tell you it wasn’t water coming down but a thick, black precipitation of hot oil and soot, like liquid tar, mixed with heavy, scalding shrapnel that cut, burned, and blackened everything in its path.

The eruption also sent ground waves through the bedrock at about 13,000 miles per hour, which caused bystanders to feel a “thump” and houses to shake. These were picked up by the stylus on the new seismograph at Dalhousie University, a mile and a half away. People in Sydney, Cape Breton, about 250 miles northeast, felt the mysterious shock. One hundred ten miles away in Charlottetown, Prince Edward Island, plates and glasses shook for a few seconds, as if from an earthquake far away.

The explosion itself and the ground waves were quickly followed by the third force, air waves, concentric circles of gas bubbles racing outward from ground zero like those seen in 1950s instructional films about atomic bombs. This invisible force initially traveled at supersonic speeds before dropping to a sonic velocity of 756 miles per hour, similar to what atomic bombs generate. Ian Forsyth, a student at the Halifax County Academy, not far from the Citadel, felt two blasts as the school principal was reading Psalm 103.

As a father has compassion on his children, so the Lord has compassion on those who fear him; for he knows how we are formed, he remembers that we are dust. The life of mortals is like grass, they flourish like a flower of the field;

When they heard a “dull boom” coming from the north produced by the ground wave, “the principal looked up and we focused our eyes on him.” After a moment’s hesitation, he returned to Psalm 103.

the wind blows over it and it is gone, and its place remembers it no more.

A second later the air wave hit, throwing windows inward and bringing plaster down on the students.

Although the air wave was invisible, its effects were not. As it moved out from the epicenter, the walls of air simply blew buildings apart, without leaving a trace. Also called shock waves, and concussions, they smashed the Halifax City Hall clock tower in the center of downtown, 2 miles from Pier 6, stopping its arms at 9:06. “The city hall itself is something of a wreck,” wrote Stanley K. Smith, the editor of the Saint John (New Brunswick) Daily Telegraph. “The face of the clock, though this building is over 2 miles from the scene of the explosion, is blown in and the hands register the hour and minute at which the horror fell upon the city.”

From the book THE GREAT HALIFAX EXPLOSION: A World War I Story of Treachery, Tragedy, and Extraordinary Heroism by John U. Bacon.  Copyright © 2017 by John U. Bacon.  From William Morrow, an imprint of HarperCollins Publishers. Reprinted by permission.