Of course semi-automatic guns are deadlier. Here’s why scientists took so long to say so.

We desperately need research on firearms—but the federal government can't fund it. 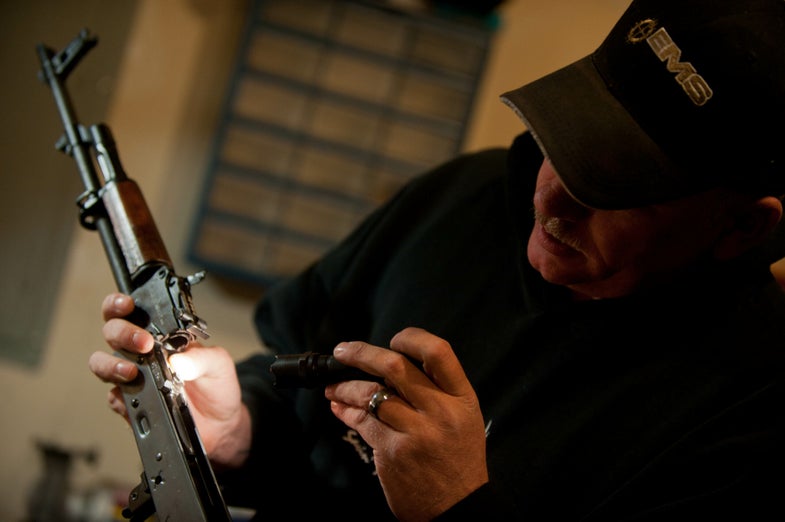 Whether you’re for or against guns, if you’re a Popular Science reader you’re probably in favor of science. And when it comes to firearms, we’re woefully ill-advised on that front. Today, researchers added yet another scrap of knowledge to the small pile of what we know about guns in America: semi-automatic rifles allow shooters to wound and kill more people.

The fact that we haven’t studied that simple, straightforward issue is a testament to how little we study firearms, which the authors write in their research letter published in JAMA. They begin by noting that “Currently, there are no comprehensive assessments of injuries from different types of firearms,” and later note that, even though they were asking a fairly simple research question, their findings were limited by how little data was available about each shooting. “Incidents involving semi-automatic rifles may differ from other incidents in ways that may partially explain the association but could not be controlled,” they wrote. “This lack of data highlights the need for a national centralized database to inform the debate on an assault weapons ban.”

In order to produce the single chart in the new paper, the group of researchers scoured the FBI database of active shooter incidents—the most comprehensive one available—yet still didn’t have the information they needed to analyze whether semi-automatic weapons allowed shooters to kill more people. To figure that out, they had to match each incident with media coverage to determine the precise weapon type. Semi-automatic weapons self-load a new bullet after every trigger pull, rather than requiring the shooter to manually load one, enabling the wielder to fire off rounds more quickly. The FBI database doesn’t distinguish between semi-automatic or non-semi-automatic rifles, so at least three articles had to confirm the firearm type for the researchers to be sure they had the right data.

Using this method for every incident in the FBI database from 2000 to 2017, the researchers ended up with 248 shootings, a quarter of which involved a semi-automatic weapon. Most of the rest featured handguns, followed by shotguns and then non-semi-automatic rifles. In those 248 incidents, shooters collectively killed 718 people and wounded 898. Semi-automatic weapons were banned under the Violent Crime Control and Law Enforcement Act of 1994, though the law applied only to weapons manufactured after that point. It also had a built-in sunset provision that meant the ban expired in 2004 and hasn’t been renewed since, despite several attempts to bring it back (from politicians on both sides of the aisle).

Again, these were limited conclusions because the researchers couldn’t control for or investigate the effects of many factors that might have influenced outcomes. The FBI database provides each shooter’s age, but no other demographic data. And though there are stats on the number of people killed and wounded, there’s nothing on what kind of injuries they sustained or any other details about the incident. For that, scientists have to rely on media reports.

All this is because the federal government is banned from funding research on firearms. The 1996 Dickey Amendment states that “none of the funds made available for injury prevention and control at the Centers for Disease Control and Prevention may be used to advocate or promote gun control.” A similar phrase added into a piece of 2011 legislation also prevents the National Institutes of Health from spending money on gun research (the Obama administration worked against that, but funding has since dropped off). That doesn’t mean that other institutions can’t provide funding, but since a huge percentage of research money comes from the federal government it’s difficult for scientists to get support elsewhere, especially on a reliable basis.

Grants often are the only thing keeping labs open and running, so if there’s not a steady stream of cash coming in, researchers have to switch their area of interest to something more easily funded. Lacey Wallace, an assistant professor of criminal justice at Penn State, wrote in 2017 that “Lack of funding leaves some researchers, like myself, limited to small-scale studies with a low budget. The problem with studies like these is that they are often based on samples that are not nationally representative. That means we can’t generalize from the findings or address all the questions we might have.” And without that research, she noted, we’re not going to get answers to the many open questions we have about gun violence.

This study is one very, very tiny step toward understanding more about how guns and gun laws impact violence in America, but we’re unlikely to make much progress without funding. And so, in the end, this is just another reminder of how woefully uninformed we are about this public health crisis. In a 2017 editorial, the editors of every journal in the JAMA family noted that more people died in 2015 from firearms than from motor vehicle accidents. They wrote that as publishers of medical research, they were committed to putting out information that would help policymakers reduce the 36,000 or so gun deaths a year. “But,” they noted, “the key to reducing firearm deaths in the United States is to understand and reduce exposure to the cause, just like in any epidemic, and in this case that is guns.”