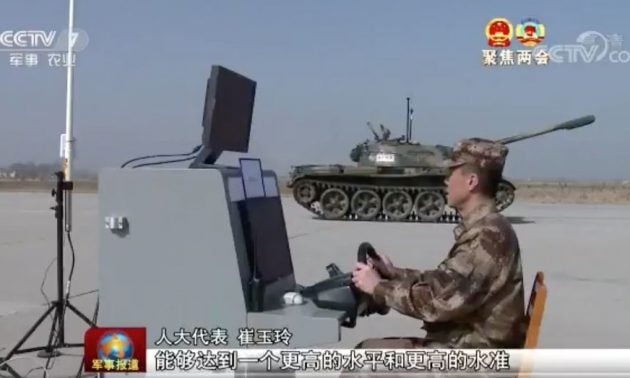 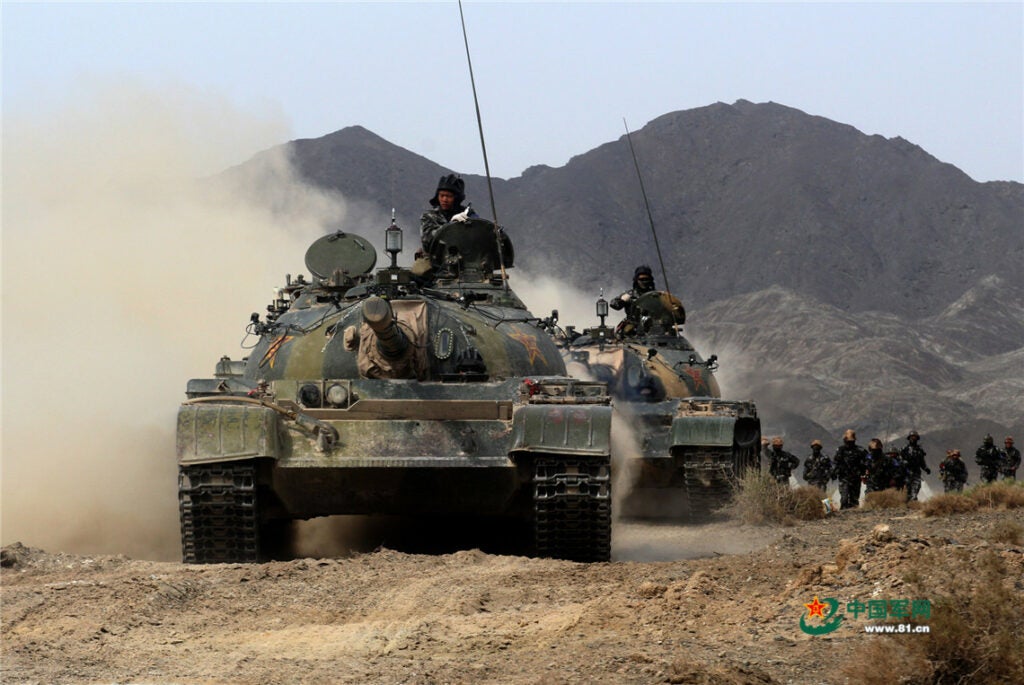 The ZTZ-59 is a copy of the Soviet T-54, upgraded with a 105mm cannon and modern fire control systems. While relegated to second line units, the PLA still has thousands of ZTZ-59s in its inventory.

The ZTZ-59 is a copy of the Soviet Type 54 tank, which first entered service in the People’s Liberation Army in 1959. However, new technology is giving the 40 ton vehicle new life.

China is using its ZTZ-59 tanks for new purposes, like firefighting, combat engineering, and as robotic targets for realistic, live fire training.

Versions of the ZTZ-59 have been modified to operate without a human driver inside. Viewing operations via tank mounted video cameras, operators can guide the vehical by an off-board system with a joystick. As with any other driverless system, potential upgrades may allow for greater autonomy. 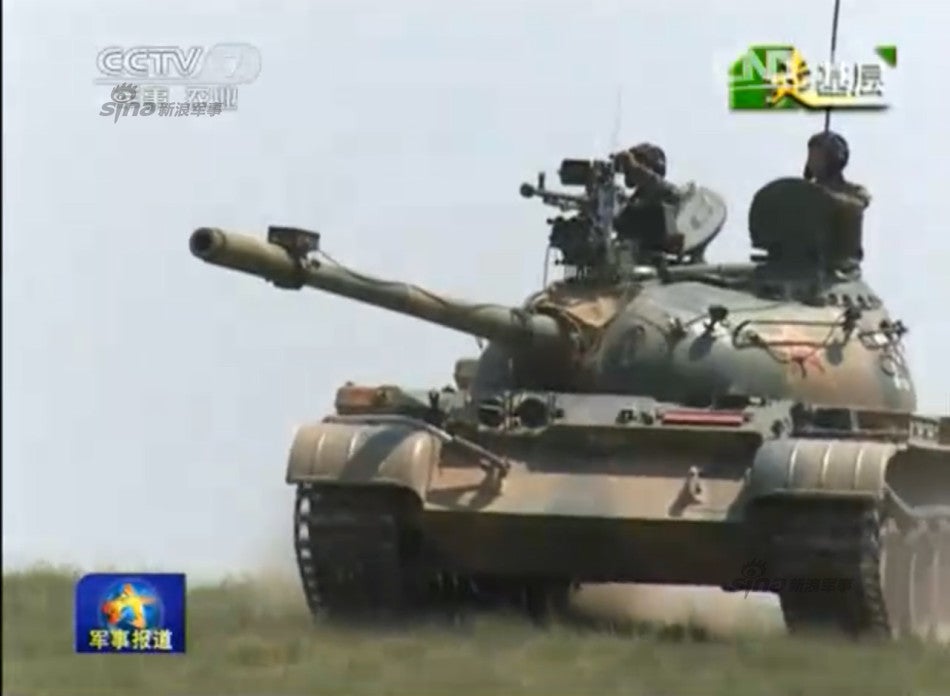 One of the Red Force tanks, a ZTZ-59, took the initiative after losing contact with its main force, destroying several blue force tanks and infantry formations, while dodging 10 anti-tank missiles, and then using their disabled tank as a roadblock. Their war exercise exploits were enough to earn them a spot on a CCTV news boardcast. (Thanks to Hongjian for uncovering the clip). In the future, Red Force tanks could be shooting at robot tanks with live ammo, instead of ‘laser tagging’ Blue Force units.

While images of a robot tank evoke science fiction futures, the reality of this particular vehicle’s purpose is to act as a moving target for exercises and weapons targeting. It makes a more realistic target for anti-tank missile and artillery crews to shoot at. Indeed, the ZTZ-59 needs a human loader to load ammunition into its 105 mm main gun, and there are no visible signs of an autoloader on the tank. 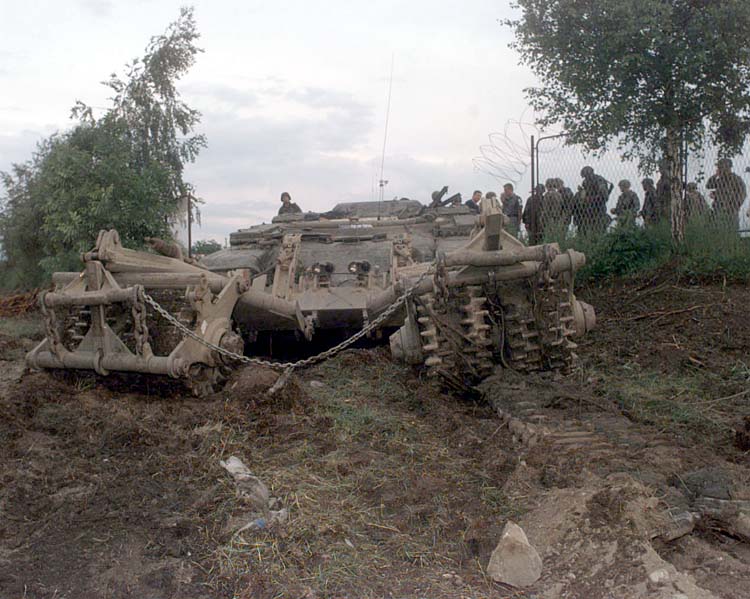 The Panther, an unmanned mineclearing vehicle converted from M-60 tank chassis, is remotely operated, using its rollers to rip up minefields, as seen here in Kosovo.

However, the robotic ZTZ points to a wider use of robotic systems by China’s army, much as the conversion of the equivalently aged US M-60 tank into a robotic mine clearance vehicle via the “Panther” program became part of a larger and ongoing US Army foray into unmanned ground vehicles. 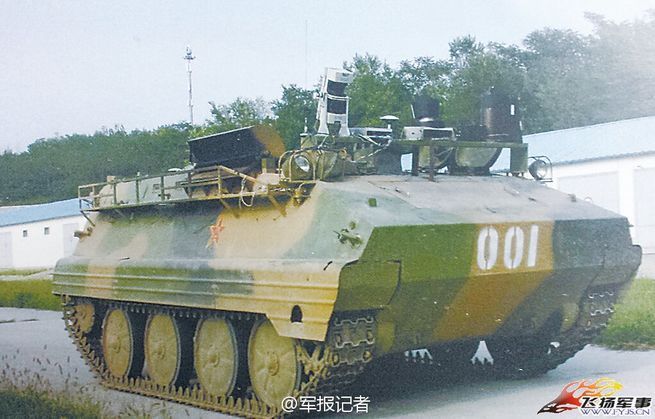 The ZSD-63 is one of China’s first AFVs, having entered into service in the 1960s, with multiple hospital, recon, mortar, troop transport and antitank variants. This ZSD-63 have been modified to drive autonomously, as indicated by the three front mounted sensors, which include video cameras, and presumably LIDAR and radar for navigation.

Since 2014, a series of pictures have emerged of converted Chinese armored vehicles, which had been modified into autonomous robots with cameras and LIDAR for navigation. China is also offering smaller machine gun equipped robots for export, and has expended significant resources in building legged robots. While the ZTZ-59 robotic tank is strictly noncombatant for now, it will only be a matter of time until the PLA, like every other major military, deploys greater numbers of robotic vehicles.