Twilight of the Astronaut?

In a year when the heroes of space were robotic explorers and plucky capitalists, the future of NASAâ€™s manned program seemed shakier than ever 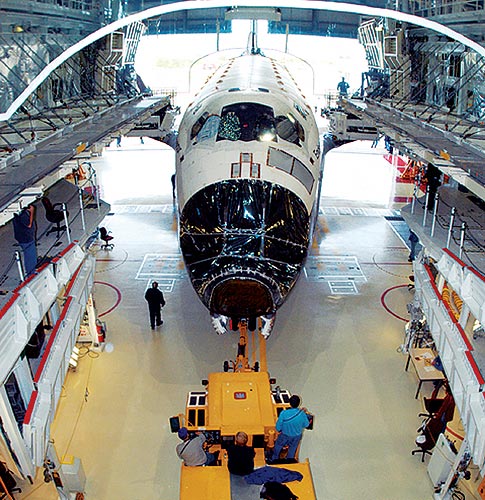 The aging shuttle–one of the three remaining–gets a tune-up at the Kennedy Space Center.

The year opened with a presidential commitment to space unrivaled since John F. Kennedy’s vow to put a man on the moon: In January, George W. Bush promised not only to return astronauts to the moon by 2020 but also to use it as a testing ground for possible “human missions to Mars and to worlds beyond.” His directive came less than a year after the Columbia disaster grounded NASA’s human-spaceflight program. The space agency originally hoped to have the shuttle flying again as early as last September, but the program is $900 million over budget, and the launch date has been extended to at least May of this year. A replacement craft-needed if the agency is to have a human-spaceflight program when the shuttle is retired in 2010-has still not passed the sketchpad stage.

But NASA scored several triumphs last year with unmanned probes that expanded the boundaries of what we know about the solar system. Cassini beamed back enthralling images of Saturn´s rings and one of its moons, Titan, and the twin Mars rovers found unassailable evidence that liquid water once flowed across the Red Planet´s surface. Sure, Genesis crash-landed as gracefully as a belly-flopping sumo wrestler, but scientists think they might be able to salvage some of the solar particles it brought back to Earth. â€We´re entering a second golden age of exploration,â€ says Charles Elachi, director of the Jet Propulsion Laboratory in Pasadena, California, which designs most of NASA´s unmanned probes. “Things I used to dream about are becoming reality.”

Meanwhile Burt Rutan’s band of aerospace renegades generated big news on the Buck Rogers front. On June 21, longtime Rutan test pilot Mike Melvill lifted off from the Mojave Desert aboard SpaceShipOne, becoming the first astronaut to earn his wings in a spacecraft designed, built, and flown without government support. Rutan and Co. won the $10-million Ansari X Prize with back-to-back suborbital flights in the fall, inspiring Virgin king Richard Branson to license Rutan´s concept for tourist trips. Already, Branson says, he has a waiting list of 11,000 people willing to pay $190,000 each to spend a few minutes in suborbital space. Rutan is now designing his next spacecraft, a larger rocket with more sophisticated safety systems.

While some have dismissed Rutan’s exploits as low-tech, high-wire parlor tricks, many scientists are ready to embrace a vision in which venture capitalists take over the business of manned spaceflight. For NASA to continue making human spaceflight a top priority is “an incredibly dumb idea,” says Nobel Prize-winning physicist Steven Weinberg. By year’s end, the president had failed to detail the cost involved in his initiative for human-based exploration, and the future of NASA’s manned efforts seemed more uncertain than ever. For example, in late summer, the main oxygen generator on the International Space Station failed, then worked only sporadically for seven weeks. Weinberg and others in the scientific community contend that NASA should focus on making discoveries through robotic missions such as the Mars Reconnaissance Orbiter, scheduled to launch this August, and the James Webb Space Telescope, the high-powered replacement for the Hubble. These programs are safer, cheaper and far more scientifically valuable, they argue, than ones involving astronauts.

Are we entering an age when astronauts are no longer national heroes pushing the limits of space travel, but simply paying customers amusing themselves in suborbit? Not if NASA has anything to say about it. Observes Space Policy Institute director John M. Logsdon, “We as a species aren’t going to be satisfied exploring (deep) space with nothing but robots.”