If We Can’t Freeze People on Earth, Don’t Try it in Space

A reader inquires: "Why can't we put people into some sort of cryogenic sleep and launch them to Mars--or to an even more distant destination, like Alpha Centauri?" 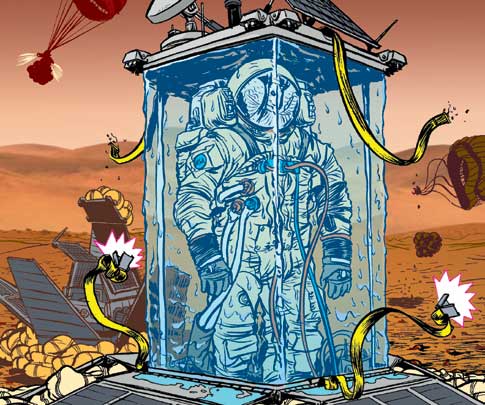 Setting aside very real concerns such as our lack of a spacecraft with suitable size and power to launch astronauts to Mars–much less the outer planets or other stars–suspended animation lingers more in the realm of sci-fi than reality. Yet the concept remains attractive, especially for longer journeys, because astronauts in a Rip Van Winkleâ€like stupor might be protected from the serious health hazards associated with distant space travel, and they wouldn’t need food–or entertainment. The nearest star system to Earth, Alpha Centauri, is 4.36 light-years away, meaning that even if we are somehow able to develop a spacecraft that travels 50,000 miles per second, it will still take 16 years
to get there. A ship big enough to carry food and supplies to support fully animated astronauts for such
a trip would require so much fuel as to be impracticable. And there are only so many times bored astronauts can fill the time with Scrabble.

So what’s holding the idea back? Well, first we need to distinguish between the types of cryogenic sleep that “cryobiologists” are considering: hibernation and suspended animation. And while some consider both options viable, and are researching new approaches to make these cryogenic visions a reality, biological roadblocks have so far prevented scientists from inducing these states in humans.

Hibernation is probably the more realistic option. Scientists are studying the biochemical triggers that enable groundhogs and other mammals to take a months-long nap each year, in the hope of generating similar states in humans. So let’s assume biologists do find a way to send people under, which would require dropping their internal body temperature to about 40F. These hibernating astronauts would still have minimally active metabolisms. Their cells would emit waste products, which would build up and become poisonous after only a few months in space. Hibernating animals get around this problem by returning to a semi-wakeful state every few weeks. During this time, their body temperature zooms back up to normal, allowing cells to flush their waste as the animal excretes. Mission planners would need to figure out a similar strategy to keep sleeping astronauts from poisoning themselves with cellular waste.

Putting astronauts in suspended animation–halting their metabolisms at temperatures below freezing–would theoretically preserve them indefinitely, but this technique presents its own set of problems. Namely, ice. “Everything in biology is soft and squishy,” says Gregory Fahy, vice president and chief scientific officer at the cryobiology research firm 21st Century Medicine. “If ice forms in a living system, it can rip up intracellular structures and make blood vessels leak.” Problematic for our interstellar explorers, to say the least. To forestall the freezing process in organs for transplant, Fahy and his colleagues have tried diluting water-based bodily fluids with agents like glycerol, a process analogous to putting antifreeze in a car’s radiator. Yet cells need water, so Fahy’s strategy–so far unsuccessful–depends on fooling thirsty cells into thinking they have plenty of H2O, when in reality they’re filled with biological antifreeze. Astronauts would be wise to approach this strategy with caution.

Even if these problems were resolved, would lowering astronauts’ body temperatures actually protect them from any of the potentially
damaging space hazards they’d face on long trips? High-intensity cosmic radiation is one of the biggest dangers for astronauts who venture outside
of Earth’s natural magnetic shield
(the International Space Station is well within this boundary; Mars is not), yet there is no reason to expect that cooling or freezing tissue would mitigate its effects. Same goes for
the serious muscle atrophy and bone
decalcification that imperil astronauts. But one advantage of these strategies is indisputable: According to NASA bioastronautics director Guy Fogelman, freezing astronauts for their journey would “definitely resolve any behavioral issues.”