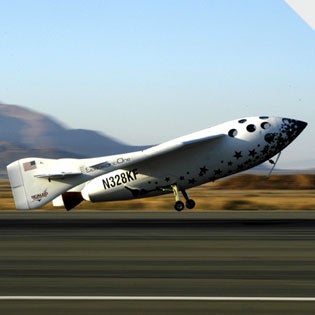 Shown just before touchdown at 90 mph, SpaceShipOne returns to the runway on a previous test flight.

MOJAVE, CALIF., June 21, 2004–Burt Rutan’s revolutionary SpaceShipOne flew into space Monday morning, becoming the world’s only successful privately funded space vehicle and making what could be the initial major step toward a viable space tourism industry. But the flight was marred by a potentially lethal control failure that is likely to delay Rutan’s attempt to win the Ansari X-Prize for the first demonstration of a reusable, three-passenger spacecraft.

The suborbital flight began at 6:47 a.m. PDT when SpaceShipOne and its mothership, White Knight, took off from Mojave Airport, where thousands of spectators and media gathered to watch the event. Mike Melvill, 63, flew SpaceShipOne while Brian Binnie piloted White Knight–both are test pilots for Scaled Composites, Rutan’s company. (Microsoft billionaire Paul Allen funded the project through his company, Vulcan, investing around $20 million into Rutan’s radical design.)

The two aircraft climbed to 50,000 feet, where SpaceShipOne separated from White Knight. At 7:50 a.m., Melvill ignited SpaceShipOne’s hybrid rocket motor, which was fueled by 600 pounds of rubber and 3,000 pounds of nitrous oxide. The vehicle accelerated straight up during the 80-second engine burn, reaching almost Mach 3.

Near the end of the climb, one of the electrical actuators that controls the craft in pitch and roll apparently failed. When Melvill called for a pitch maneuver that should have moved the left and right wing controls, only one of them moved, and SpaceShipOne rolled to the left, skidding 20 miles off course in seconds. “I really thought I had a big problem,” Melvill said after the flight. But the vehicle left the atmosphere at that point–and with no air, the position of the control surface no longer mattered, and Melvill was able to stabilize it with pneumatic jet thrusters and activate a back-up trim system. “If I hadn’t popped out of the atmosphere at that moment, it would have been all over,” Melvill said.

The failure and the course deviation caused the flight to miss its target altitude of 360,000 feet, but navigation data showed that SpaceShipOne reached 328,491 feet, a few hundred feet above the 62.5-mile altitude that defines space. During his three minutes of weightlessness, Melvill admired the view (“absolutely awesome,” he enthused. “I saw all the way from San Diego to Bishop [Calif.]”) and floated M&Ms around the cabin.

After reaching his maximum altitude, Melvill switched SpaceShipOne to its feathered-wing configuration, in which the spacecraft’s wings pivot upward to permit the vehicle to re-enter the atmosphere in a highly stable shuttlecocklike configuration. Melvill described the feathered re-entry as loud but otherwise a “non-event,” and actually more stable during the supersonic, Mach 3 part of the re-entry than in subsonic flight. Rutan cites the feathered re-entry as a major achievement, because it allows a vehicle to re-enter the atmosphere with a simple control system.

After re-entry, Melvill flipped the wing back into its normal position and glided the small vehicle to a gentle touchdown at Mojave. Now officially an astronaut, Melvill described the flight as “mind-blowing,” providing a glimpse as to what the experience might be like for passengers who take similar flights in the future.

The control problem may affect Rutan’s X-Prize attempt. To win the prize, SpaceShipOne will have to fly above 100 kilometers twice in two weeks, with two passengers or equivalent ballast. Rutan had hoped that the vehicle’s next flight would be its first prize flight, but that decision will wait. “There’s no way we’ll fly again without knowing the cause and knowing that we’ve fixed it,” he said.

Monday’s flight will remain the true historic achievement, given the total absence of government funding in the project. Indeed, as SpaceShipOne was being towed back to the hangar, Melvill sat on top of the fuselage holding a sign that read “SpaceShipOne, Government Zero.”

After winning the X-Prize, Rutan will quickly move on to other challenges. During press conferences leading up to Monday’s flights, he dropped hints about “going to orbit sooner than you think,” an apparent allusion to the Tier 3 orbital space-vehicle program that he is reportedly involved in. The SpaceShipOne program is known as Tier 1, and Tier 2 would probably be a tour-bus-like version of the same concept, a vehicle capable of carrying up to 10 passengers on suborbital space flights. Under his contract with Allen, Rutan is required to deliver data on how much such a vehicle would cost to build and fly. Mojave Aerospace–a new company jointly owned by Allen and Rutan and disclosed this week–will own the rights to SpaceShipOne technology and would oversee future franchising and commercialization efforts for the system. Details will remain secret, said the cagey Rutan, “until we’re ready to push something out of the door.”