Days with Two Sunrises and Your Dinner in a Cup

If California is the nursery of the alternative space agenda, Mojave is the crib. Here–just a few miles from Edwards Air Force Base, where the remnants of Lockheed Martin’s ill-fated, billion-dollar X-33 orbital space plane sit mothballed–seven private rocket companies have set up shop. Most famous is of course Scaled Composites, whose majordomo, Burt Rutan, is widely expected to capture the $10 million X Prize for the first private vehicle to travel to space twice in two weeks. But at the lesser-known XCOR Aerospace, work proceeds apace.

The nondescript building that houses XCOR was shaken by the first-ever sonic boom–Chuck Yeager knifing overhead in 1947 aboard “Glamorous Glennis”–and it is in some sense still shaking, with the almost palpable drive of its tenants. Jeff Greason, XCOR c0-founder and president, keeps a schedule that makes his old Intel job look like a union boondoggle. Today’s 14-hour workday winds down with him crunching numbers, trying to lower the battery weight on XCOR’s space-plane-in-progress, the Xerus. He stares at the computer, foraging dinner from a Tupperware container, keeping crumbs away from the mice that regularly scurry through the office.

Randall Clague, a newish hire, pokes his head in. His eyes are at half-mast, his speech reduced to primitive monosyllables.

“Can a corpse do the work?”
“If I apply electricity in the right places.”

Greason seems too old to be 37. (“I live fast,” he says.) His fugitive appearances in the high-desert sun have not so much tanned his skin as pinked it, like baby back ribs after you’ve wood-smoked them for seven hours. In a town where the relentless wind has been known to blow the yellow stripes off the road, where there’s nowhere to see a movie and not even a decent diner, there’s nothing to do but work. This is exile, really–a fact Greason and his team fully accept. There are no distractions that way. Nothing to take your eye off the ball.

That they are a team of inveterate optimists is clear from the mere fact that they are still in the civilian spacecraft industry after being scorched by perhaps its most notorious flameout. The nucleus of XCOR is the propulsion team from Rotary Rocket, the company that in the late ’90s tried to build a
rocket-powered helicopter-like craft called the Roton intended to lift payloads into orbit. The team was laid off just weeks before the test that Greason believes would have proved whether or not the concept worked. Chief funder Walt Anderson, having lost confidence in the project, pulled the plug after spending nearly $30 million out of his own pocket.

Greason, true to form, doesn’t view the Roton’s failure as a failure. Anderson’s fat wallet allowed him to “scour the entire Western world for talent” and make it worth their while to come to Mojave. And here they still are–albeit not operating in the style to which they had become accustomed. The bootstrap culture of XCOR is the antithesis of the lavish, indeed NASA-like, spending that doomed Rotary Rocket. The guys (and one woman) drive rust-embroidered cars. They scour the goldmine of eBay for parts. (“Lockheed spent more on their environmental assessment for the X-33 than we’ve spent in total,” notes chief engineer Dan DeLong.) The igniter on XCOR’s first test rocket-plane, the EZ-Rocket, is a $2 chainsaw/weed-eater spark plug. “If NASA were going to do that, it’s conceivable they’d devise their own igniter that would do what a spark plug does,” says XCOR electronics engineer Mike Massee, who wrangled some of the used gear. “We just use a spark plug.”

The Xerus is not, for a number of reasons, an X Prize candidate. To Greason, that’s immaterial. He’s focused on getting the crucial part of the equation down: You build a rocket engine that’s cheap, nontoxic, low-maintenance and so fail-safe that you could demonstrate it in a hotel banquet room (which XCOR actually did, at a conference held in 2000 at a Holiday Inn in Scottsdale, Arizona). And then you make the whole rig scalable, from suborbital to orbital on up. XCOR has already struck a deal with Space Adventures–which lists on its Web site the Xerus, as well as a competitor, the Russian-designed Cosmopolis, as suborbital rides for hire. “Whoever gets finished first gets those passengers,” says Greason. “That’s as big a plum right now as the X Prize.”

The best-case scenario has test pilot Dick Rutan (Burt’s brother) climbing into the Xerus and offering a stick of Beemans gum, with a Chuck Yeagerâ€like flourish, to a paying customer within five years. By NASA standards, that development time frame is short. But then, at NASA there’s no profit motive to hold engineers’ feet to the fire. “Profit is an incredibly transforming force that has never been applied to space,” Greason says. “The difference between the kind of progress we’ve seen and the kind of progress you’d see if people made money at this, well, there’s almost no limit.”

In his 1977 book The High Frontier, Gerard O’Neill, a Princeton physicist with a utopian bent, laid out his vision: Small private groups break the trail to space, establishing settlements for the benefit of mankind. And–this is key–it’s all done independently of governments. O’Neill, who died in 1992, believed the large-scale colonization of space isn’t just a possibility but an imperative. He proposed whole communities living in orbiting habitats and on the surface of nearby planets and moons. Those colonies would be outposts for, among other groups, workers mining valuable extraterrestrial resources for use back on Earth.

XCOR and shops like it are a contemporary expression of the O’Neillian spirit. To a die-hard O’Neillian, NASA’s perpetual refrain that civilian space travel is “only about 30 years away” is a crock (one contributor to an Internet newsgroup recently wrote: “NASA, your thirty years are up”). And the FAA’s Byzantine development and launch regulations, well, they’re just a way of ensuring that ordinary citizens stay grounded, forever.

“What O’Neill said was, â€You the people go to space,'” says Rick Tumlinson, president of the ber-O’Neillian Space Frontier Foundation. “â€Take your tools and your imagination and use the resources you find.'”

In some ways, getting the first part right–cheap and reliable access to low Earth orbit (LEO)–may obviate the need to compromise on the big, dreamy decisions that follow, like whether to concentrate on the Moon or Mars. “The assumption is that either one costs a lot of money and you can only afford one of them,” says DeLong. “I say, â€Let’s do it all.’ Make it cheap enough and you can afford to do it all.”

Greason agrees. “I’m convinced people will pay more to fly than it costs us to fly them. How much more? Even if it’s just a little, there are so many more people to fly than there are satellites to launch or microgravity experiments to conduct, that that’s where you’re going to make it. And I’m telling you, jeez, people are hungry.”

Still, on days when investors are skittish and equipment tests fail, members of the XCOR team could be forgiven for mulling other dreams–ones not involving windblown outposts and days with two sunrises and your dinner in a cup. Greason still routinely gets calls from his former Intel colleagues “asking me if I’ve got this out of my system yet and want to come back.”

XCOR’s EZ-Rocket is an almost comically tiny aircraft, but when tethered to the asphalt for a test, it lunges fiercely against its lead. The engines, no bigger than 40-ounce beer bottles, generate enough thrust to push the plane to Mach 1, if the airframe could handle it, which it can’t. Before lighting up the EZ-Rocket for a test run on the tarmac at Mojave Airport, the crew conducts a pretest in the hangar. It takes a while because Clague is meticulously ticking off 278 interim steps on a comprehensive checklist: helium loading, liquid-oxygen loading, rollout, propulsion preflight. “If you do everything on here,” says Doug Jones, one of the company’s founders, who has drifted over to look at the list, “the test can’t not work.”

There’s an odd balance here between pragmatism and audacity; that’s the position private rocketeers find themselves in. Greason has vowed to produce results, not outrageous claims–to blow gas into engines instead of blowing hot air in bars. By no stretch do these guys want to be perceived as flakes. Which may be why they don’t talk much about their personal visions, at least in public. But make no mistake: The XCOR team are in the business of building spaceships because they want to go. Where, exactly? “Doesn’t matter,” says Clague. “Up. Why? Buzz Aldrin said, ‘If you have to ask, you won’t understand the answer.'”

Of all the reasons human beings cite for traveling to space, to an O’Neillian, two are paramount. The first is to make the species inextinguishable. “If we get hit by a dinosaur-killer, we’re in deep kimchi,” as XCOR engineer Aleta Jackson puts it–and therefore we’d better scatter our genetic material widely. The second is manifest destiny. We explore and conquer and settle by nature. It’s a trait of the species to want to boldly go where none have gone before, and then to put down roots, declaring Brigham Youngâ€like, “This is the place.”

This is not a group given to static Saganite contemplation. “Carl wanted to observe, and that’s great,” says Jackson. “But I’m an engineer by temperament, and sitting around not doing anything is not my idea of a good time. I’d like to go out to Ganymede and see what’s there. Does Io have life? What is the universe like from Alpha Centauri?”

Greason, for his part, would perhaps spend his last years in a homestead with an inflatable hydroponic greenhouse on the lip of the Heinlein Crater on Mars (not far, possibly, from Rick Tumlinson’s planned butterfly terrarium). One of the few XCORites who doesn’t think he wants to spend a big chunk of time off-Earth is electrical engineer Buzz Lange, who handles XCOR’s flight operations and helmed the EZ-Rocket for its engine test. His ideal vocation: “working the edge” as a low-Earth-orbit bush pilot, hauling people or freight to orbit and back. Avocation: first bagpiper in space. “If the plane can stand the weight, I’m taking the pipes up,” he declares. The image emerges of Lange, jowly with age, holding the fort back on Earth, playing “Scotland the Brave” in an empty hangar. “Of course,” he says, “if everyone else is going, I might get the itch too.” 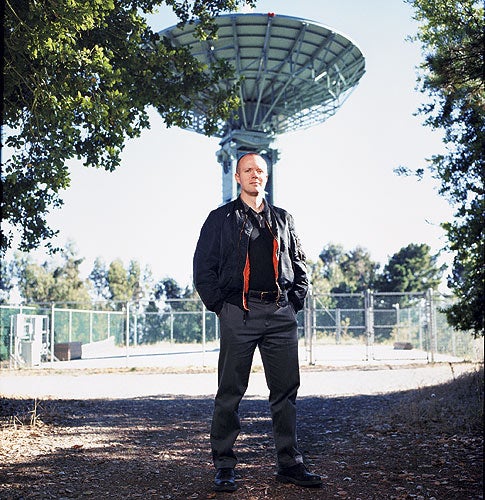 The Saganite: Easy Does It 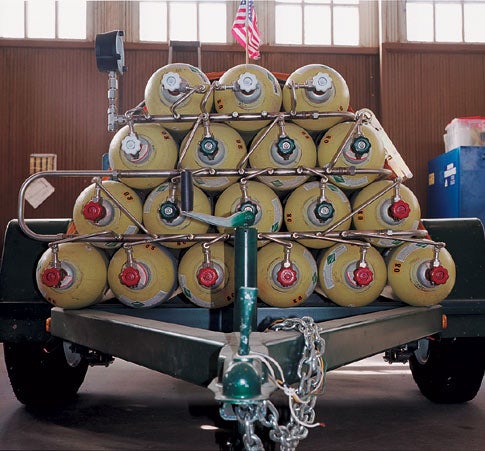 Resting on a trailer are canisters of nitrogen and helium gas, which are used during engine tests to pressurize the kerosene-and-liquid-oxygen fuel mixture for the XR-4K5. 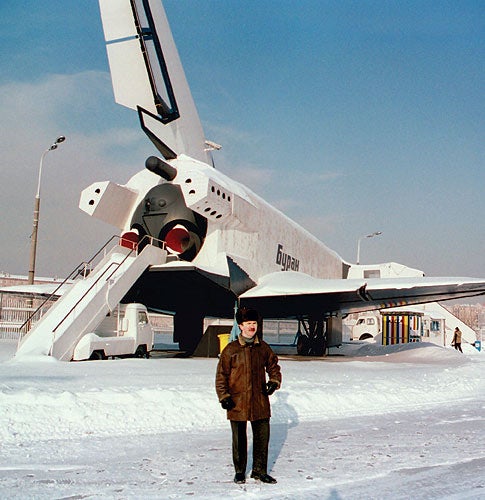 Cosmonaut Alexander Poleschuk went to Mir at a time when the Soviet space program was revered. Like NASA space architect Wernher von Braun, he believes governments must take the lead on space exploration. Today, though, Russia is too broke to pioneer new cosmic exploits. The Buran shuttle is now a tourist attraction in Moscow’s Gorky Park (background). 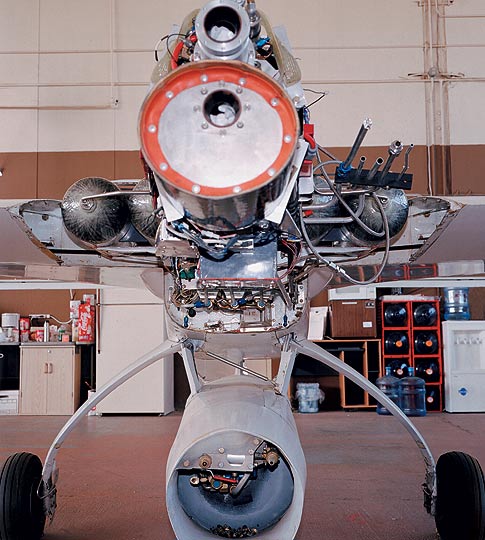 The EZ-Rocket (innards shown here) was XCOR Aerospace’s proof of concept for a rocket propulsion system that is safe, cheap and reliable. 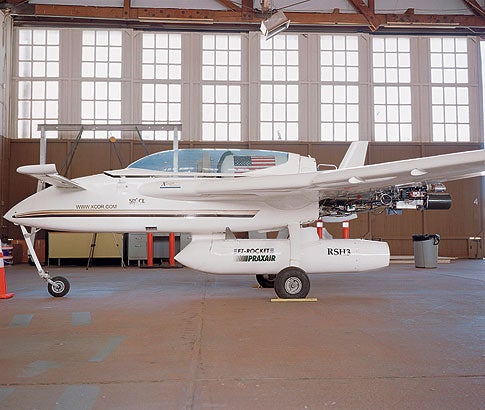 At XCOR headquarters in Mojave, California, team members are working on the XR-4K5 (far left), a prototype of the engine intended to launch XCOR’s Xerus space plane into suborbit. 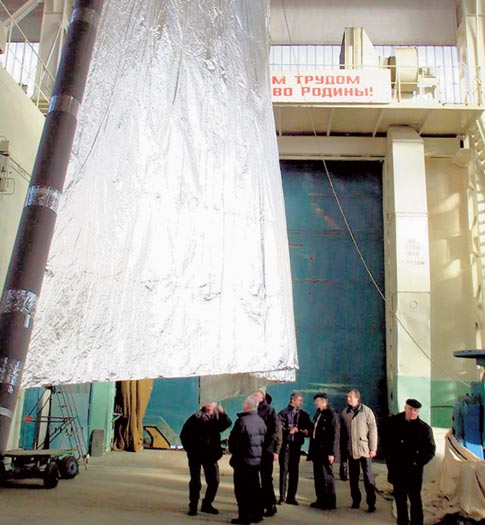 Engineers gather at spacecraft manufacturer NPO Lavochkin for a simulation of solar-sail deployment in zero gravity. 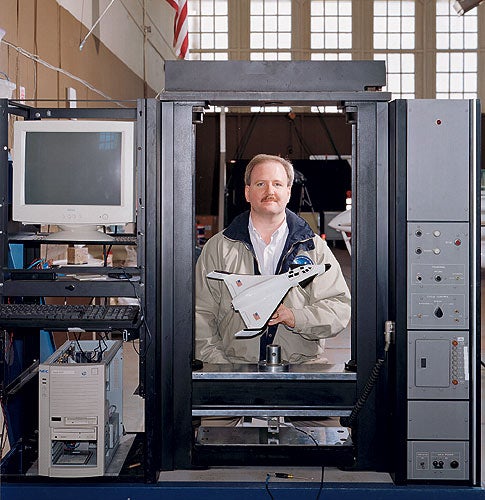 The Oneillian: If We Build It

Jeff Greason’s rocket company, XCOR, would have delighted Princeton physicist Gerard O’Neill, for whom the human colonization of space was an imperative. Standing behind a tension-compression machine (used to test the strength of materials), Greason holds a model of XCOR’s space plane, the Xerus, which is designed to take tourists on space rides. 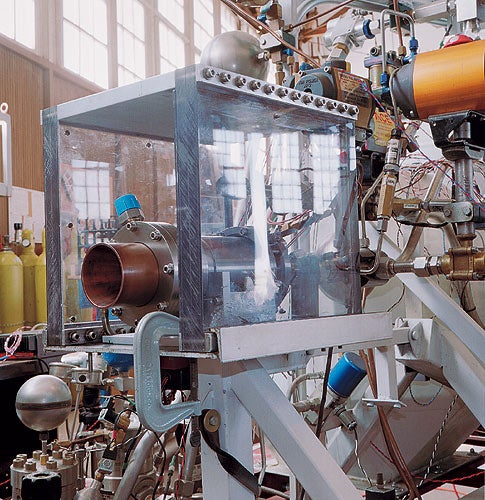 At XCOR headquarters in Mojave, California, team members are working on the XR-4K5, a prototype of the engine intended to launch XCOR’s Xerus space plane into suborbit.
Air Force
Military
Space