A Look Back at a Noble Mars Lander

On the first anniversary of the Phoenix Mars Lander's touchdown, we know a lot more about Mars than we did a year ago 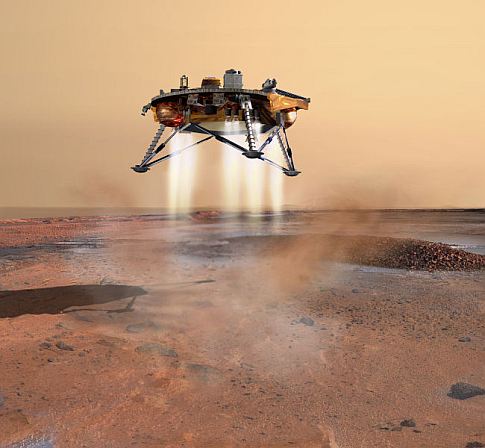 One year ago, scientists at NASA’s Jet Propulsion Laboratory, Lockheed Martin Space Systems, and the University of Arizona held their breath as the Phoenix Mars Lander hurtled toward its final descent and touchdown in the northern arctic plains of Mars. It was the first spacecraft landing on Mars without airbags since Viking 2 landed in 1976.

At 4:53:44 PM Pacific time on May 25, 2008, radio signals confirmed that Phoenix had survived its final descent and had landed safely on the Martian surface. The tricky and precise maneuvers involved with the spacecraft’s entry, descent, and landing were executed in a manner described as “textbook perfect,” leaving Phoenix poised almost perfectly level on the Martian surface. And the crowd at Mission Control went wild.

During its five-month mission, the at Phoenix mission surpassed all expectations — completing scientific work and experiments during 149 days of its 152 Martian-day lifespan. The first milestone occurred less than a month after landing, when the Lander’s Robotic Arm uncovered evidence of frozen water when digging a trench. Chunks of bright material in the trench were exposed on June 15 and were still present on June 16, but by June 19 they had vaporized through the process of sublimation, whereby ice goes directly from a solid to a gas state.

In September, the Lander’s Surface Stereo Imager camera photographed several dust devils moving across the Arctic plain. On the mission’s 104th Martian day, 29 images were taken of the western and southwestern horizon, and six different dust devils appeared in 12 of the images. Later in September, a laser instrument on the Lander detected snow falling on the Martian surface. And soil samples analyzed by the Lander’s Thermal Evolved Gas Analyzer (TEGA) and wet-chemistry laboratory revealed the presence of calcium carbonate and clay — both of which form only in the presence of liquid water on Earth.

Other findings included mildly alkaline soils unlike any found by previous Mars missions, and small concentrations of salts that could be nutrients to support life. Cameras onboard Phoenix returned more than 25,000 images, from panoramic vistas of the Martian surface to microscopic images of soil samples.

By the end of October, seasonal sunlight at the landing site was declining, and the solar arrays could no longer generate the battery power needed to operate the Lander’s instruments. On November 2, after operating for two months beyond its expected three-month life, Phoenix transmitted its final brief signal via NASA’s Mars Odyssey orbiter. “Phoenix has given us some surprises, and I’m confident we will be pulling more gems from this trove of data for years to come,” said Peter Smith, the Phoenix mission’s principal investigator.

The HiRISE camera on NASA’s Mars Reconnaissance Orbiter captured this image of the Phoenix Mars Lander parachuting down to the Martian surface on May 25, 2008. It was the first time that a spacecraft imaged the final descent of another spacecraft onto another planetary body. Although it appears that Phoenix is descending into the crater, it is actually about 12 miles in front of the crater. 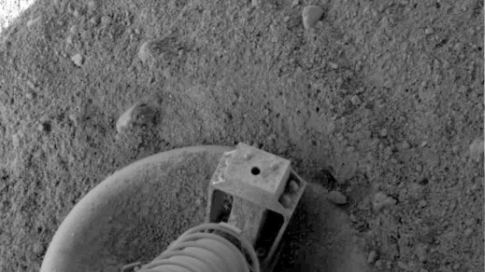 The Phoenix Mars Lander touched down in the north polar region of Mars on May 25, 2008. This close-up photo shows that one of the Lander’s three footpads appears to have slid a few inches on touchdown. 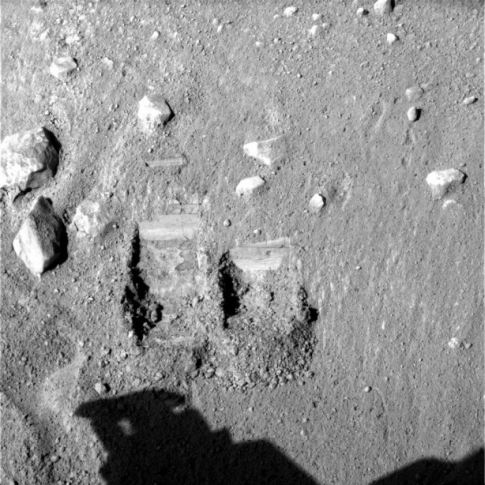 Eleven days after landing, Phoenix’s Surface Stereo Imager captured this image of two trenches dug by the Lander’s Robotic Arm. Soil and ice samples from trenches dug throughout the mission were analyzed by the Thermal and Evolved Gas Analyzer (TEGA) instrument. 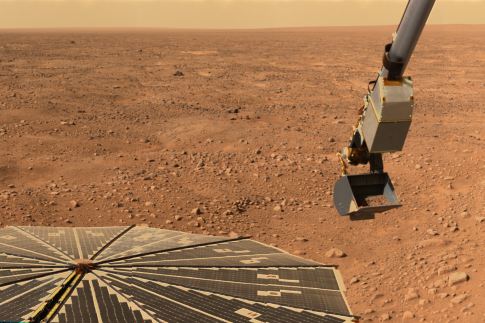 This image shows the Lander’s solar panel and the Robotic Arm with a sample in the scoop. It was taken by the Surface Stereo Imager looking west on the 16th Martian day (sol 16) after landing.

This panorama mosaic of images, taken by the Surface Stereo Imager, documents the midnight sun during several days of the mission. 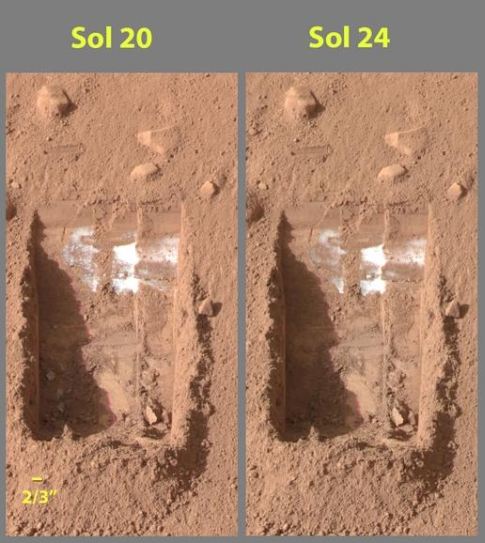 These two images show the sublimation of ice (transition from solid directly to gas) over a four-day period in a trench named “Dodo-Goldilocks.” The trench was dug by Phoenix’s Robotic Arm. 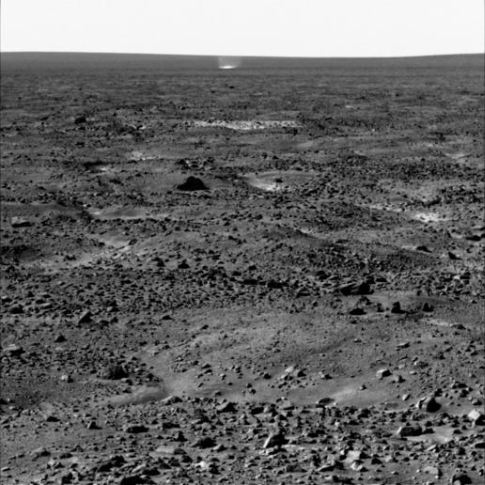 The Surface Stereo Imager camera caught this dust devil west of the lander on the 104th Martian day of the mission. At least six dust devils were observed in a dozen images taken on that day. Dust devils are whirlwinds that develop when the warmed Martian surface heats the layer of atmosphere closest to it, and the warm air rises in a whirling motion, stirring dust up from the surface like a miniature tornado. The dust devil visible in the center of this image is estimated to be about 1,300 feet from the Lander and about 13 feet in diameter. 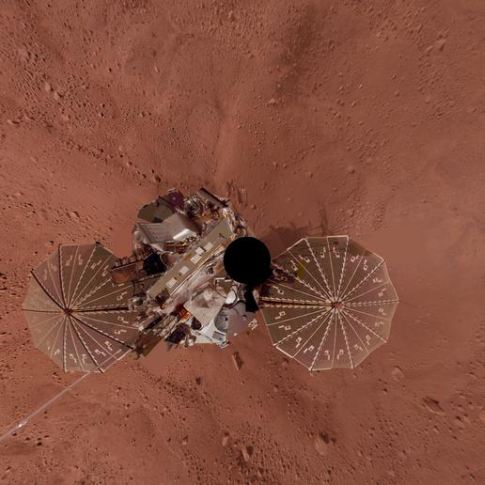 This “self portrait” of Phoenix on the Martian surface was compiled by combining hundreds of exposures taken by the Surface Stereo Imager camera and projecting them as if looking down from above. The black circle is where the camera itself is mounted on the lander — it is out of view in images taken by the camera. The images were taken during the period from June 5 through July 12, 2008. 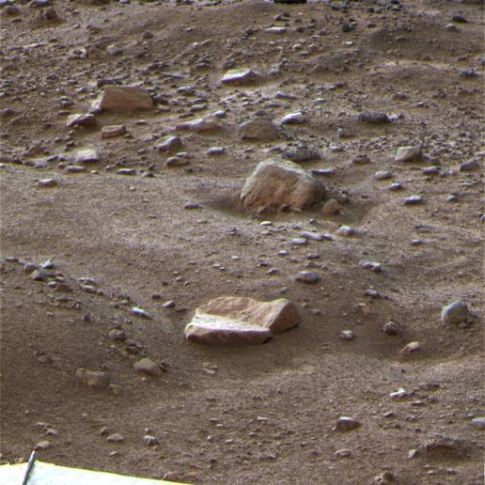 This image of the Martian terrain and two rocks named “Winkies” and “Quadlings” was taken on October 27, 2008. It was one of the last images taken before the Lander’s final communication was received on November 2.