Cosmos 1, the first mission to test if spacecraft can sail to distant stars on beams of sunlight, was lost shortly after launch on Tuesday

The Cosmos 1 solar sail experiment was lost on Tuesday when the Russian Volna rocket carrying it to orbit failed, according to the Russian Space Agency. Had the launch been successful, the experiment would have tested whether sunlight could have pushed the spacecraft into a higher orbit. Explore the mission that was to be with our exclusive slideshow, pulled from the pages of Popular Science.

On June 21, the California-based nonprofit Planetary Society will attempt for the fourth time to launch its privately funded Cosmos 1 solar sail. A Russian ballistic missile will deliver the 30-meter-wide sail, which is made of Mylar and looks like a giant pinwheel, into an 825-kilometer near-polar orbit. Like a sailboat coasting with the wind, the craft won’t need an engine: Pressure from the sun’s photons, striking the sail’s surface at various angles, will boost its orbital velocity. If the concept is successful, more-developed solar sails might one day cruise among the planets of the inner solar system. And they’ll never need to refuel.

To get out of Earth’s orbit quickly, however, a solar sail would require more than a gust of sunlight. Physicist and science-fiction author Gregory Benford thinks he has a solution. When the Planetary Society gives them the go-ahead, he and his brother James, the CEO of Microwave Sciences, will use a 70-meter antenna in Goldstone, California, to fire a 500-kilowatt beam of microwave energy at Cosmos 1. The influx of high-energy photons will produce at best a tiny change in the sail’s velocity–not enough to kick it
out of orbit, but enough to measure–and it will

stand as an important test. “We know the physics will work,” James Benford says. “We’re now trying to find the best approach to get us out of the solar system.” 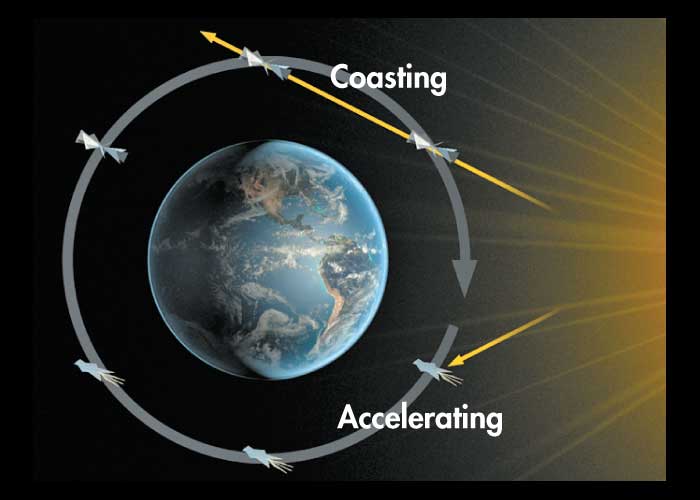 Cosmos 1 will speed up only when the sunlight hitting the sail is heading in the same direction as the craft. The sail blades, which can be rotated like Venetian blinds, will turn their edges to the sun when moving toward it, allowing the photons to fly past, and then turn their faces into the sun, getting a boost. 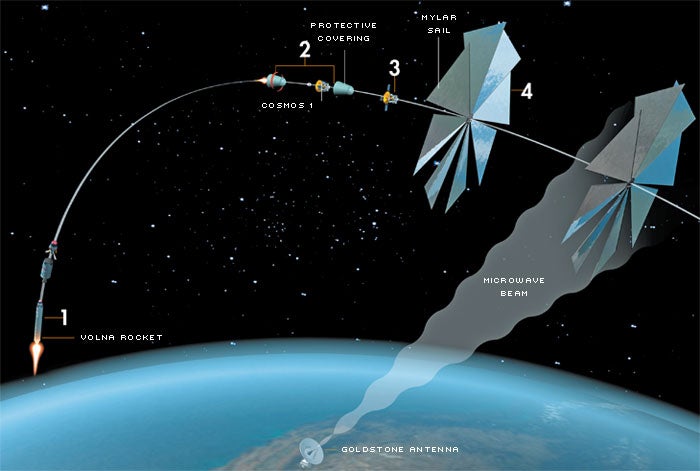 1 Ascent The three-stage, 14-meter-long Volna rocket lifts the Cosmos 1 spacecraft–with its sails safely folded up inside –into orbit 825 kilometers above the Earth. 2 Separation After the third stage is exhausted, explosives blow off the protective covering that houses the spacecraft. 3 Testing Before deploying the sail, Planetary Society engineers will perform tests to see if everything is running smoothly. This phase could last a week. 4 Deployment The sail is made up of eight separate triangular Mylar blades, each of which is only five microns thick. To unfurl the sails, tubes running the length of each blade are inflated with nitrogen, expanding each one to its full, 15-meter length and holding it rigid. When photons from the sun bounce off the reflective surface, they impart a force in the opposite direction, accelerating the craft. While in orbit, the spacecraft will send radio signals to various tracking stations on Earth so that engineers can follow its position. * Microwave power After two to four weeks of solar sailing, Planetary Society engineers will give the Benford brothers their chance. They hope to test two microwave-beam techniques: impulse and tracking. In impulse mode, the beam fires at a fixed spot in the orbit, hitting the sail for about 0.07 second–just long enough to detect a change in velocity. Tracking mode is more difficult but more forceful; the antenna trains its beam on the sail as it rises in the sky, giving it a sustained, 3.3-minute jolt. 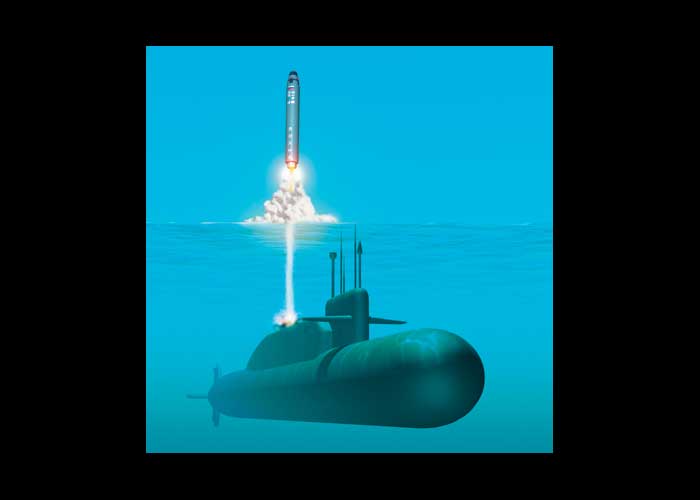 Blasting Off Because the Cosmos 1 project is privately funded, the Planetary Society had to do some price hunting, and Russia is best for space discounts. A Volna rocket carrying the spacecraft will launch from a submarine in the Barents Sea.