The Scariest Ideas in Science

Undead viruses! Killer foxes! Soldiers who never sleep! This is no horror movie--it's today's scientists at their most daring 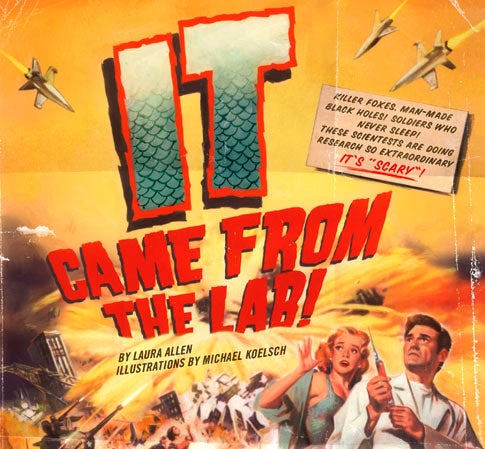 Maybe we saw The Andromeda Strain a few too many times in our formative years, but we can´t help shivering when we hear about microbiologists reanimating long-dormant lethal viruses. And those biologists working to make human limbs grow back: Haven´t we seen that film? Don´t the guys in lab coats all die in the first reel?

They may sound cinematic, but the incredible research projects on the following pages are not imaginary. They´re real, funded ventures by respected scientists. They have perfectly rational goals. They also happen to creep us out.

Continue reading below for six of the scariest ideas in science.

Up to 50 million people worldwide perished in the 1918 Spanish flu pandemic. Within a year, the virus mutated, immunity spread, and the flu vanished. In October 2005, a team led by the Centers for Disease Control and Prevention pieced together the virus´s genome from lung tissue of a 1918 flu victim buried in Alaskan permafrost and brought her killer back from the dead. It´s out there, in a lab fridge, deadly as ever, right now.

WHY, GOD? WHY? The scientists say that the virus can help reveal the mechanisms of a pandemic and that it offers timely insight into how the emerging H5N1 avian flu might have leapt from birds to humans. Reanimating the monster is a “practical curiosity,” says Erling Myhre, an infectious-disease physician at Lund University in Sweden and a former United Nations weapons inspector in Iraq. “It gives a better understanding of how genetic information in [influenza] can change over time.” The work goes on. Last October, members of the group debuted a vaccine to protect against the reanimated virus.

FEAR FACTOR The project is what experts call “dual-use research”: It has beneficial uses but potentially nefarious ones too. Risk, researchers believe, is inherent to research on human threats. “The public has to understand that in order to be prepared for pandemics and bioterrorism, dangerous work has to happen,” says Michael Stebbins, director of biology policy at the Federation of American Scientists.

The work also freaks out scientists, however. “The 1918 flu reconstruction is a bad example to other countries,” argues Harvard University virologist Jens Kuhn, a member of the science working group for the nonprofit Center for Arms Control and Non-Proliferation. With proper resources, “anyone can now also reproduce this virus [from the published genome].” A team in Canada is already studying its own version. And escape from the kind of high-level containment labs that store the virus isn´t unheard of-SARS samples inadvertently saw daylight several times during that epidemic several years ago.

Although current antiviral drugs-
and the new vaccine-thwart the reconstructed flu in mice, there´s no guarantee that they work as well on humans (a problem because nobody born after 1930 is immune to the 1918 strain). “To proceed with the construction of this virus under those circumstances is irresponsible,” says Rutgers University microbiologist Richard Ebright, a prominent critic of the research. “If it had to be done,” Kuhn agrees, “it should have been done in a different way.”

According to the National Sleep Foundation, 71 percent of Americans get eight hours of sleep or fewer on weeknights, and the percentage is rising. “We´re an increasingly sleep-deprived society,” says circadian-rhythm scientist Russell Foster of the University of Oxford. But a new crop of “wakefulness-promoting” drugs can improve alertness-with no real side effects. Last summer Darpa, the U.S. Department of Defense´s advanced-research arm, tested the drug CX717 by exposing subjects to battle conditions for four consecutive 20-hour days. Sleeping only four daylight hours, they remained amped and alert. Meanwhile, prescription modafinil can keep civilians fresh for 48 hours. Its successor, armodafinil, poised for FDA approval, lasts even longer.

** WHY, GOD? WHY?** Pennsylvania-based drugmaker Cephalon developed modafinil and armodafinil to treat narcolepsy, sleep apnea and shift-work sleep disorder. But fighting drowsiness has world-changing potential. The electric lightbulb allowed workers to remain productive after dark. Drugs that allow us to toil into even wee-er hours is the next leap forward.

FEAR FACTOR The pills make us more productive. But is that a good thing? Will they cast us into true work-all-day/party-all-night zombiehood? “Modafinil is just the beginning,” says Pennsylvania State University sleep researcher David Dinges, who has tested it extensively. Foster agrees. “We may be the first species that will genuinely occupy the 24-hour day,” he says. “But we know very little about the consequences of subduing sleep.” (Rats, it should be mentioned, die after 17 days without shut-eye.)

The drugs appear to act on one or two neurotransmitters. They´re not replicating real rest, though. It takes the combined efforts of four or five neurotransmitters to keep humans awake naturally. “The drugs can be effective for quite a while,” Dinges says, “but a chemical substitute for sleep they´re not.”

You can’t reason with them. You can’t kill them. They’re…

The South Korean government and Samsung Techwin recently debuted SGR-A1, a weaponized robot that autonomously tracks intruders up to about two and a half miles away with high-resolution and infrared cameras. Anyone who doesn´t give the robot´s voice-recognition system the correct secret code is identified as an enemy to a remote human operator, who directs the ´droid to unleash a warning, rubber bullets, tear gas or live rounds.

WHY, GOD? WHY? South Korea has one of the world´s lowest birth rates and shares a border with one of the most feared military dictatorships. The government is pouring millions of dollars into the development of guard robots to ease manpower shortages along borders, coasts and terrorism targets, and expects the robot to enter service after 2008.

FEAR FACTOR Foster-Miller, the company that created the first weaponized robots-the Iraq-bound Swords-has heard all the safety concerns. “The U.S. was adamant that we absolutely prove beyond any doubt that [Swords] cannot fire on its own,” says vice president Robert Quinn. Samsung insists that it´s taken equal precautions: A person must engage a key before hitting SGR-A1´s “fire” button, and the operator can designate no-fire zones. (“The exact nature of the safety system is classified,” says collaborator Hanseok Ko of Korea University, “but its goal is to prevent accidents.”) Still, soldiers making life-or-death judgments through a robotic proxy is undeniably disturbing.

The latest plan for fighting global warming sounds more like intergalactic warfare: Launch clouds of miniature spacecraft that bend 1.8 percent of the sun´s light away from Earth. Roger Angel of Steward Observatory Mirror Laboratory in Arizona has worked out the math. Now, with financial backing from the NASA Institute for Advanced Concepts, he´s making a prototype of a light-diverting material. The gram-weight flyers he has in mind would be shot into L1 orbit, a sweet spot that follows the same yearly path as the Earth. From that vantage, the crafts´ collective shadow would help cool the entire planet.

WHY, GOD? WHY? Increasing carbon dioxide levels mean that global temperatures could rise by 10