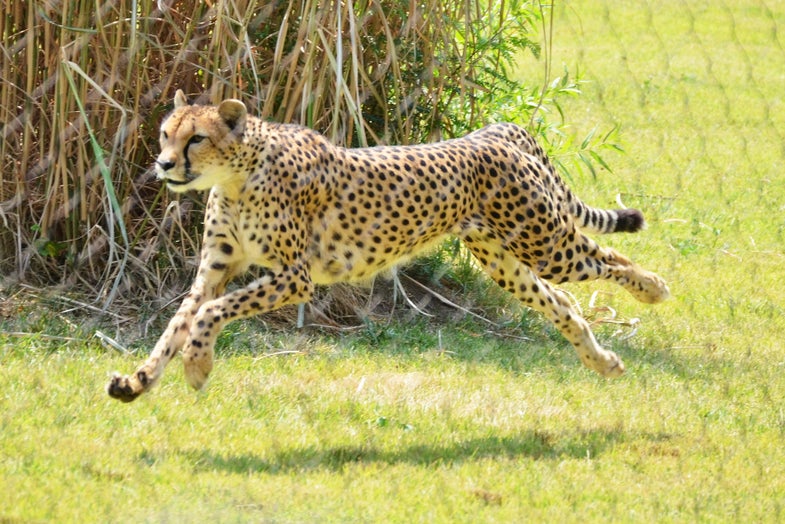 A cheetah named Sarah, who lived at the Cincinnati Zoo in Ohio, was euthanized this week at the age of 15. The Zoo says it was due to her “diminishing quality of life.” Indeed, Sarah was on the older side for captive cheetahs, who on average live to be 8 to 12 years old, according to the National Zoo.

But this cheetah wasn’t just exceptional due to her advanced age. She came to the zoo at six weeks old, and was raised by Cathryn Hilker, the founder of the Cincinnati Zoo’s Cat Ambassador program. From kittenhood, Sarah was raised alongside an Anatolian shepherd dog—a practice that is relatively common for cheetahs in captivity. Sarah made a lifetime companion of her dog friend, who was named Alexa, until the dog passed away a few years ago.

Sarah was also part of the Cat Ambassador program, which meant she worked outreach for her species, visiting schoolchildren and making TV appearances. She also garnered a bit of fame for herself in 2009 when she set a speed record for land animals, running 100 meters in 6.13 seconds. She then broke that record in 2012 at age 11, running 100 meters in just 5.95 seconds.

Beyond Sarah’s physical abilities and social successes, she seemed to have a significant impact on the trainers who worked with her. Hilker wrote her own heartfelt goodbye: “My memories are imprinted in my heart and mind of a tiny brave little cheetah who grew up and turned into the elegant animal that the mature cheetah is.”

Watch Sarah beat her record in 2012 below: