‘The Science Guy’ Talks About His Space Sail 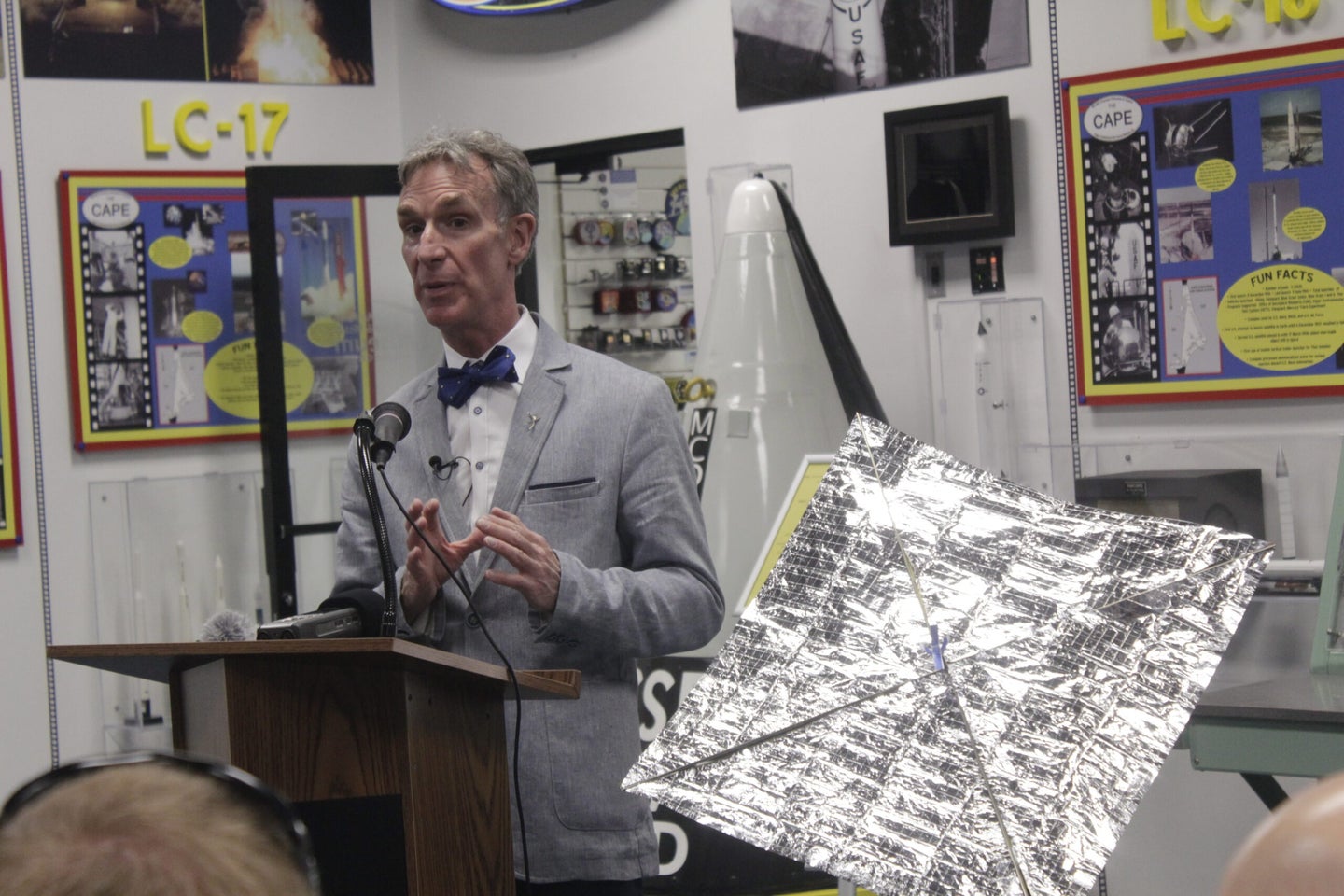 In 1976, renowned astrophysicist Carl Sagan brought a weird, reflective prop with him to the Tonight Show Starring Johnny Carson. The toy was a mockup of a solar sail—a revolutionary idea for space travel propulsion that eschews fuel. “[It] travels on the radiation and particles that come out of the Sun—the wind from the Sun,” Sagan explained to Carson, comparing the technology to how an ordinary sail boat moves through the ocean.

Fast forward to today, and Sagan’s vision for fuel-less, solar-powered space propulsion is turning into a reality. The Planetary Society, headed by Bill Nye “The Science Guy,” is launching its very own version of the solar sail concept, the LightSail, atop an Atlas V rocket at Cape Canaveral. (This launch is also carrying the Air Force’s super secret X-37B space plane.) The private space organization has outfitted a CubeSat—a miniature satellite used for space research—with four large sheets of shiny mylar that extend out from the satellite’s body. When in space, accelerating particles ejected by the Sun will theoretically push up against the mylar sails, propelling the tiny spacecraft forward.

For this launch, however, the Planetary Society won’t be doing any sailing; they just want to see if they can get the mylar sheets to deploy in the vacuum of space. On the way up, the solar sails stay folded up, tucked inside the CubeSat. Around four weeks after the satellite reaches lower Earth orbit, the mylar sheets should extend into a 344 square-foot sail that’s just 4.5 microns thick. Cameras embedded within the CubeSat’s panels will get a good view of this deployment process. 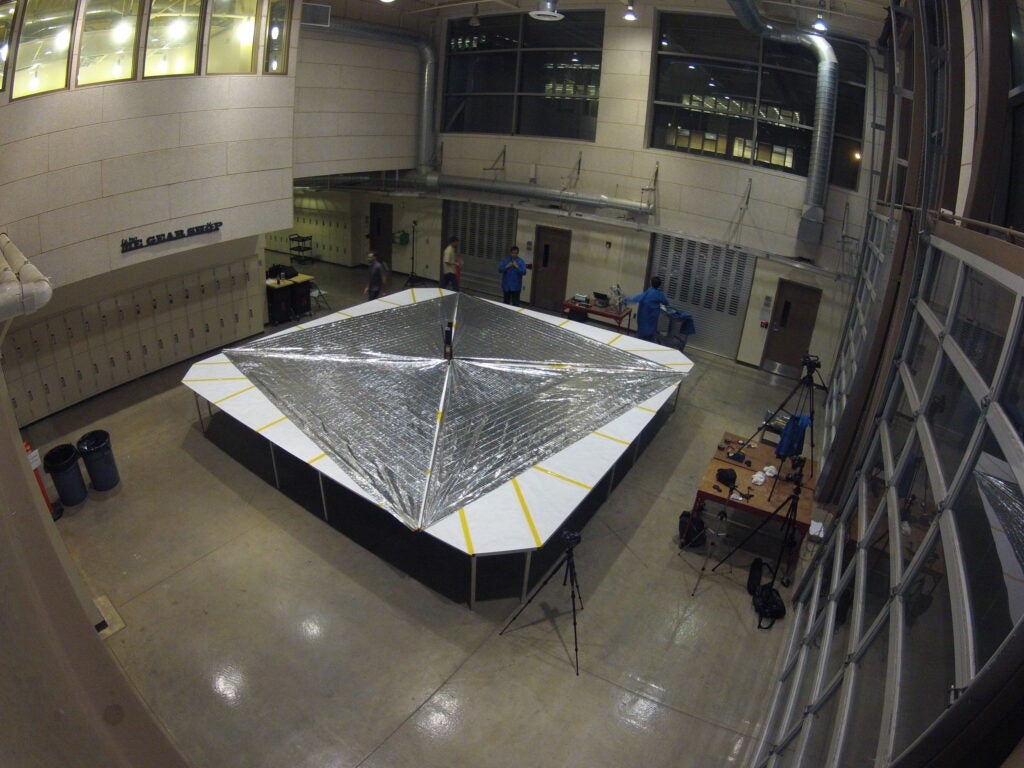 LightSail Deployed In The Lab

The Planetary Society will use what they learn about this upcoming mission to strengthen a second launch of LightSail in 2016. For that one, LightSail technology will go for some high space sailing, about 450 miles above the planet’s surface. There, it will be free of the majority of Earth’s atmosphere, allowing the sails to get a smooth breeze of solar particles.

The entire LightSail project has been backed mostly by private funding, and it recently received a big monetary boost via crowdfunding, after the Planetary Society started a Kickstarter campaign to raise $200,000 (which is well over $500,000 by now). Nye says the total cost of the LightSail research and development will equal $5.45 million, and the Kickstarter money will go toward the $1.2 million the organization still needs to raise.

Despite the large sum of money needed for LightSail now, Nye says solar sails like this one will dramatically reduce the cost of space travel in the long-term. Since LightSail doesn’t require any propellant, the costs and technical issues surrounding limited fuel supplies become obsolete.

The following transcript has been edited and condensed. 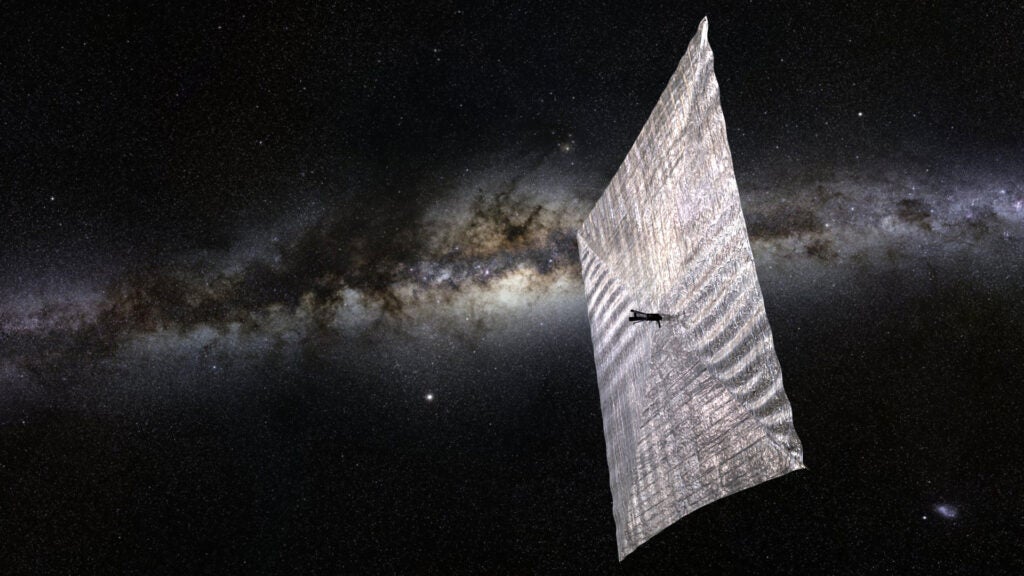 Popular Science: Why get rid of propellant for propulsion systems?

Bill Nye: You can only carry so much fuel, and it takes a lot of money to handle rocket fuel. And if you want to go farther, deeper into space—take for example the New Horizons mission to Pluto, it took nine years to get there. It’s very expensive to do it with conventional fuel, where you have to carry fuel for 10 years. You can do it, but it adds costs. So we strongly believe there are just certain missions where the LightSail is just ideal.

What types of missions do you envision for LightSail?

Looking for coronal mass ejections on the Sun, or solar storms and solar weather. Station keeping [meaning the various thrusts needed to maintain the position of a space station]. And very low cost missions from universities and the Air Force, whoever wants to do it, to go to the Moon or asteroids with spacecraft powered only by the Sun.

And could this solar sail ever move astronauts?

No, I don’t see it moving people, but there are people with more imagination than I have who can maybe make it work. But you’d be in space for a long time…. However, we hired people to evaluate a humans orbiting Mars mission. Not only did we come up with the architecture—which rockets you’d need, which missions, how many of each—but we really, for real, evaluated the cost. So we could have humans orbiting Mars in 2033 just by keeping NASA’s budget adjusted for inflation. For this humans orbiting Mars mission, it’s reasonable that you would have 100-kilowatt solar electric propulsion system that would ferry cargo out there in Mars orbit. 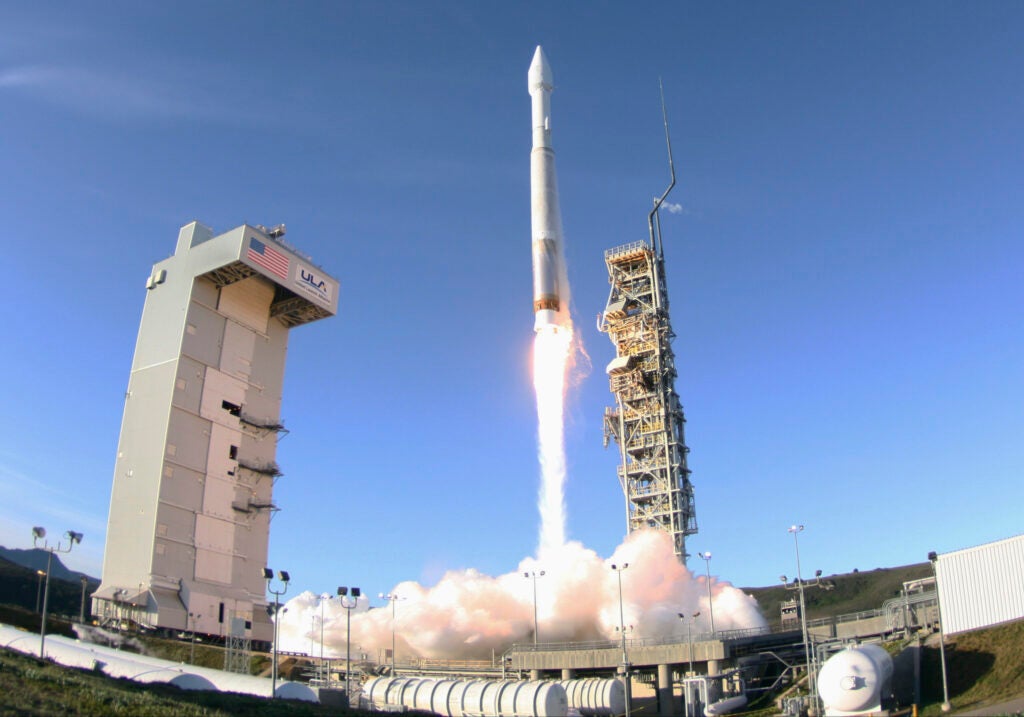 LightSail will launch atop an Atlas V

How would space travel be different with LightSail? How long would it take to get to a destination?

To get to the Moon, it would take a month, instead of a couple of days. So if you’re a university or you have other things you want to be doing between here and the Moon, you could do that. But the trouble or drawback of chemical rockets is once you’ve done your burn, you’re done. Then you have to coast wherever you’re going. But with this solar sail, you get this push day and night. But wait, you’re in space, there’s no night! So you get a very continuous, small push indefinitely.

With crowdfunding, private companies are finding new ways to fund innovative space travel endeavors. How do you see private and public space travel moving forward in the future?

What I say all the time, when it comes to low Earth orbit or even missions to the Moon, this is where solar sailing really lowers the cost. But if you want to go to Mars with people, which we all do, before that we need sample return missions from Mars, and we don’t want NASA to lose sight of the sample return. That’s what NASA can do that nobody else can do.

Magellan, Columbus, Lewis and Clark—those guys were all government funded; that’s what the government does: You go where no one’s been before. Then East India Company, Hudson Bay, Transcontinental Railroad, they all show up later. So we just want to use solar sails to go to places that nobody’s ever been, but to also use solar sails to go where we’ve already been but never for such a low cost. 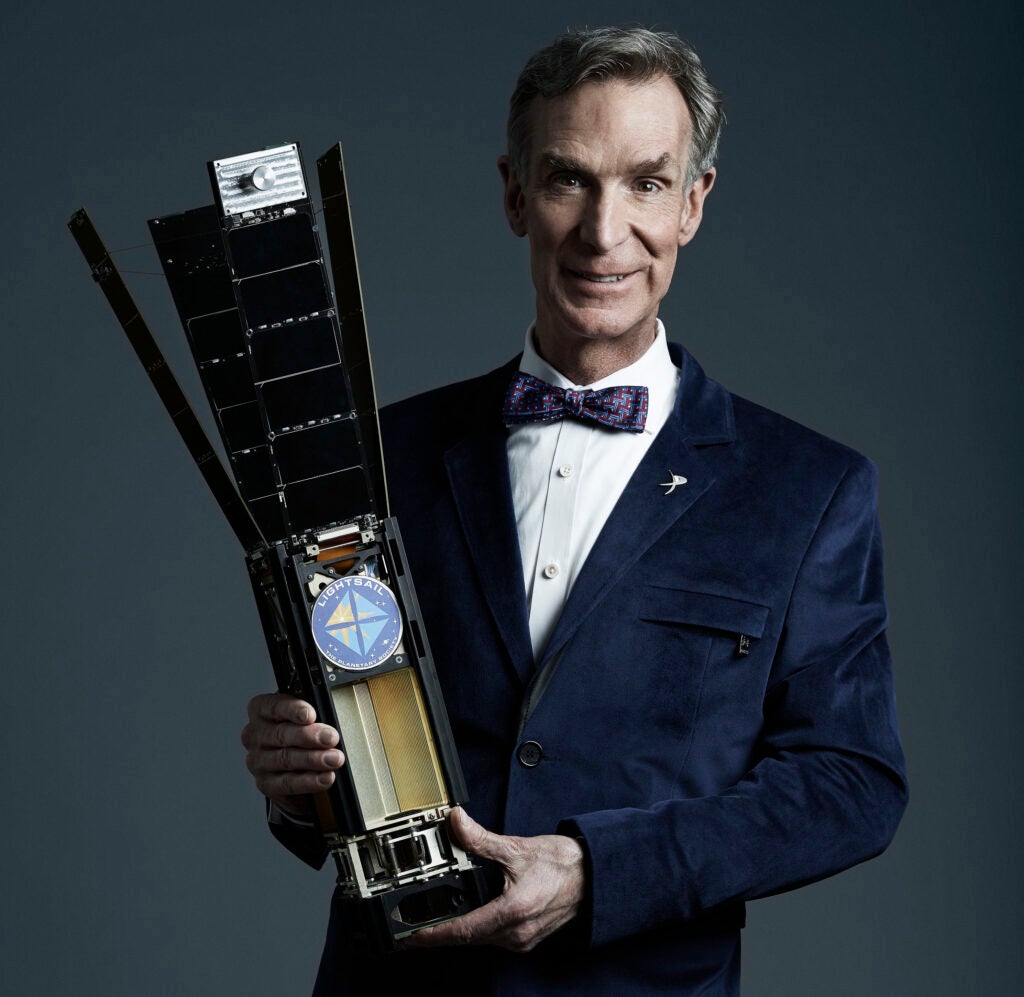