Should Mars Be Independent, Or Just A Colony Of Earth?

Illustration of a base on Mars. NASA Ames Research Center
SHARE

But what if we gave Mars its independence right from the get-go? Rather than giving future colonies to governments or corporations, Jacob Haqq-Misra thinks we should let Martian colonists develop their own values, governments, and technologies, with minimal interference from Earth. Haqq-Misra is an astrobiologist at the Blue Marble Space Institute of Science, a non-profit organization that promotes international unity in space.

Not only would Haqq-Misra’s strategy preclude any Martian wars for independence, but cultural independence could help Martians think differently enough to solve problems that Earth continues to struggle with—such as working together to fight global environmental problems, or making long-term plans for the future of humanity.

“Maybe Mars is more valuable in trying to seed the second incidence of civilization.”

Instead of getting divided by nations or plundered by industry, says Haqq-Misra, “maybe Mars is more valuable in trying to seed the second incidence of civilization.”

The plan that Haqq-Misra lays out in an essay in New Space has five main provisions:

You Can’t Own Mars, But You Can Rule A Colony

There is some legal precedent for the idea. The 1967 Outer Space Treaty, which 103 nations (including the U.S. and Russia) are party to, prohibits any nation from claiming territory in space. The treaty “makes very clear that a colony on Mars could never become a colony in the classical legal sense of the word, like the U.S. was originally a colony of the U.K.,” says Frans von der Dunk, a space law professor at the University of Nebraska. 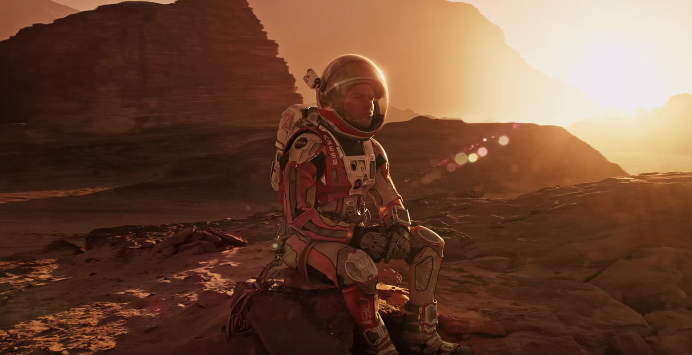 Screenshot from ‘The Martian’ official trailer

The Martian, which hits theaters in October, is a great reminder of all the things that can go wrong on another planet.

Sailors in international waters are expected to follow the rules of their ship’s flag, and astronauts must do the same. The rules even hold when they’re not on board the ship—for example, when the Apollo astronauts roamed around the moon, or when astronauts on the International Space Station do spacewalks, they’re still subject to U.S. laws.

But what about when the excursion is longer than a few hours? On the ISS, where astronauts spend months at a time, participating countries have worked up their own quasi legal system, which is pretty similar to Earth’s. If an American astronaut were to hit a Russian astronaut over the head, for example, first the U.S. would have the right to determine whether a criminal act was committed. If the U.S. doesn’t take action, then he could be tried under Russian jurisdiction.

The rules could be different when we’re talking about pioneers who venture to another planet with no intention of returning home. Still, says von der Dunk, “You cannot simply say ‘I’m no longer a citizen of the U.S.’ It’s not for you to decide.”

Von der Dunk thinks that if Americans are able to set up self-sustaining communities on Mars, they’ll consider themselves Americans and abide by U.S. laws—at least at first. “At some point in time, they will not like that anymore,” he says. “They won’t feel like they are American or Russian or wherever they come from, they’ll feel like they are Martian. They will say, ‘Listen, we don’t want to pay taxes anymore, and we want to develop our own legal system.’” Cultural evolution is inevitable in small populations that splinter off from Earth. A lot of Earthly traditions just won’t apply, and the Martians will develop their own jokes, rules, and customs. Haqq-Misra’s suggestion of limiting contact with Earth would simply speed up that transition.

Von der Dunk thinks it would be difficult to set up a colony as a blank slate, as Haqq-Misra proposes. Mars colonists would carry with them a lot of legal and cultural baggage that biases their ideas about how society should work. But over time, Martian culture could change dramatically. “It’s hard to think outside the box there, but one could think that because Mars is so different from Earth, that when they tear themselves away from traditional legal structures, they could develop something very new,” says von der Dunk. “This is all very hypothetical.”

Getting There Is Half The Battle

There are other potential problems. Getting to Mars ain’t easy, and there are a lot of ways to die once you get there. Unfortunately, Earth’s help won’t come cheap: these days it costs about $10,000 to send one pound of supplies to the space station, and that’s a much closer, easier trip than Mars. Without the financial incentives of Martian communities, resources, and/or business, nations and private companies aren’t likely to rally around the Free Mars idea. Haqq-Misra’s plan relies on either extremely thorough planning to make sure the colonies are completely self-sufficient, or generous donations to send resupply missions to Mars.

Haqq-Misra says he’s not holding his breath for anyone to jump on this idea. Still, he says, since everyone from NASA to SpaceX and Mars One has their sights set on visiting or colonizing Mars in the coming decades, it’s important to think about.

“Hopefully it’s going to instigate people to have a longer-term vision for whatever we do on Mars.”