Lonesome George’s genes could reveal the secrets of longevity

Hopefully we can all look this good when we're 101. 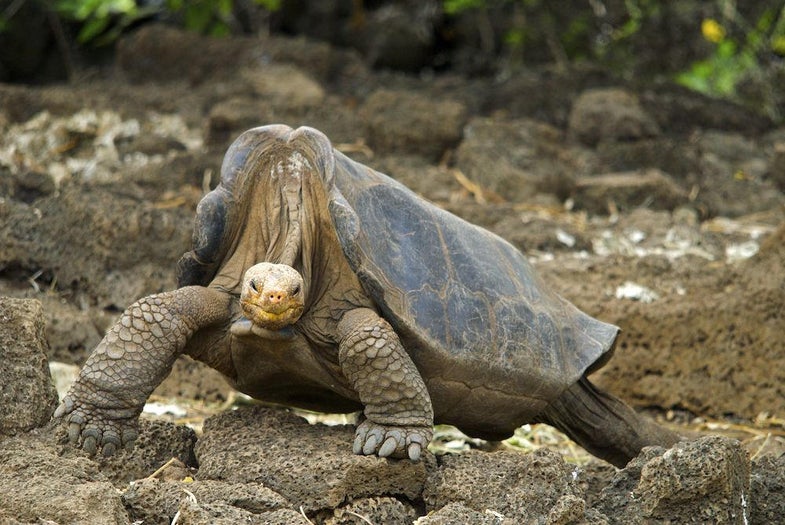 Lonesome George died when he was roughly 101. He wasn’t especially old for a Galápagos tortoise, which can live to be 150 years old, nor was he especially large, weighing in at just 194 pounds compared to the standard weight of around 330 for his tortoise relatives. What makes Lonesome George worth studying wasn’t his physicality—it’s the fact that he was the last of his kind.

Giant tortoises used to roam, albeit slowly, across much of the world. Megalochelys atlas wandered the Punjab region of India and Hesperotestudo crassiscutata traversed Central America up into the southern United States. Their gigantism isn’t the result of living on islands—they were enormous back then, too. It’s just that the only giant tortoises that survived lived on remote spits of land isolated by oceans in fairly tropical parts of the world, where an evolving climate and the rapidly expanding human population could do relatively little damage to them.

We were too late to save George’s species, Chelonoidis abingdonii, but geneticists are still trying to piece together an understanding of these giants by looking at Lonesome George’s DNA. Even if he wasn’t exceptional, his genes are. As one of the longest-lived organisms on Earth, C. abingdonii and other giant tortoises are of interest to anyone who wants to understand how some animals are able to live for such extended spans.

That’s why this international group of geneticists and biologists collected samples from Lonesome George and another giant tortoise species, sequenced their genes, and compared them to a bunch of other creatures. They published their results in the journal Nature Ecology & Evolution. This comparison allows geneticists to figure out which genes occur at higher rates in long-living tortoises compared to other reptiles or to mammals (we call this positive selection). By looking at which bits of DNA are comparatively more common amongst giant tortoises, researchers can start to figure out which kinds of traits help animals live longer. It doesn’t mean that any of the specific genes they found are “the gene for living longer,” but it does mean that the sets of genes may tend to enable a longer life.

The classic example has to do with telomeres. At the end of all DNA strands are bits of repetitive sequences called telomeres that act like end caps for the individual strands. We all start out with very long telomeres because the cellular machinery that replicates DNA is imperfect and can’t replicate the entire strand—a small bit at the end gets cut off each time. If we were constantly cutting off bits of DNA that coded for important proteins, our cells couldn’t function for more than a few replication cycles. Instead, we cut off our telomeres, which don’t code for anything. The problem, of course, is that you can’t grow them back, and eventually your telomeres get so short that the cell can’t keep dividing. This seems to be a significant contributor to the process of growing old, so lot of anti-aging research centers around how to either slow telomere decline or regenerate them after they’re gone.

Giant tortoises, as this study identifies, have genetic variants in proteins that repair and maintain DNA, especially the telomeric portions. Researchers have taken that to indicate that telomere maintenance may play a role in keeping these turtles alive for so long.

But perhaps more interesting is how giant species like Lonesome George avoid one of the plagues of our modern existence: cancer. “An important trait of large, long-lived vertebrates is their need for tighter cancer protection mechanisms,” the authors write in the paper, citing something called Peto’s paradox.

You’ve probably never heard of Peto or his paradox, so allow us to elaborate.

Richard Peto is a Professor of Medical Statistics and Epidemiology at the University of Oxford who noticed that larger animals don’t get cancer at higher rates than smaller animals. That might not seem significant to you, but it is actually pretty surprising, because larger animals have more cells. Cancer is simply a disease of cellular division—every time a cell divides it must replicate its DNA, and that process is prone to mistakes. That means every division is an opportunity for a mutation to arise. More divisions leads to more mutations, and more mutations increase the risk that a cell will turn cancerous. Since larger animals have more cells, it makes sense that they should be more prone to cancer—they simply experience more divisions. But they don’t. Studies of body size and cancer risk show no correlation between species. Within a species is a different story, though. Taller humans seem to have higher cancer rates, even after controlling for potentially confounding factors. That’s not definitive proof, but it does add to the evidence. If even slightly larger humans seem to develop more cancers, then much larger species must have evolved ways to avoid cancer—otherwise every tortoise would die from it.

Tortoises, despite their enormous size, hardly ever seem to get cancer. And indeed, when these biologists took a look at giant tortoise genomes they found more copies of genes known to suppress tumor formation as well as duplications for other genes that may help the immune system identify and kill potential cancer cells. All of these changes are minor on their own, but together they suggest that giant tortoises are overall better able to avoid cancer.

We’re not going to get into all the other individual findings in this paper because there are a ton of them, most of which are incredibly detailed and esoteric. Tortoises seem to have slower metabolisms, for instance, which some scientists think may help slow aging. They also have mutations that may help them regulate glucose uptake better and resist hypoxia. All of it will require further research to determine exactly which genes contribute to a longer life and how—this research is just the first step. There’s a lot more work to do before these findings can help keep us young—or, more pressingly, help us save other species of Galápagos tortoise. For now, it’s just nice to know that Lonesome George could contribute something to our understanding of his kind even after he’s gone. He may have been the last C. abingdonii, but he was first in our hearts.