A recent case study is scary, but tattoos aren't really to blame. 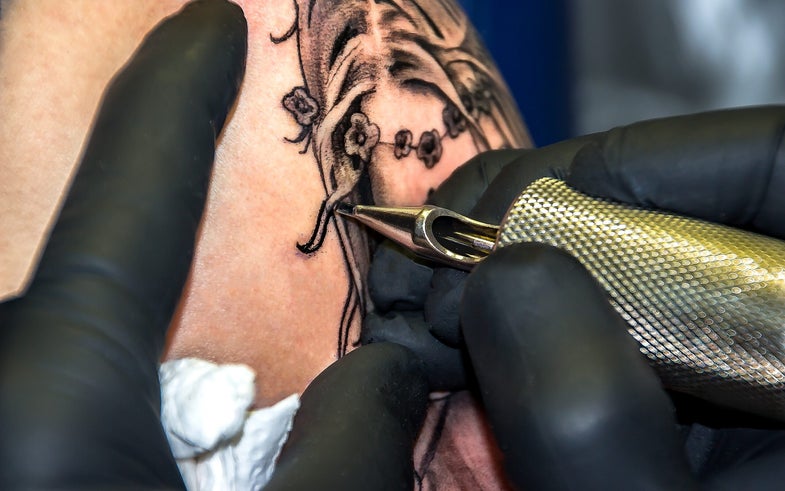 Tattoos are, to use a scientific term, flippin’ sweet. And they’re increasingly popular: more than a third of U.S. adults ages 18 to 40 have at least one. But side-eye from your old-school boss isn’t the only thing you risk when you get new ink: these living pieces of art are open wounds as they heal, which leaves you vulnerable to all sorts of discomfort—and infection.

A case study published last month in BMJ Case Reports seems like a terrifying reminder of the downsides: physicians from Texas recount the plight of a 31-year-old man who, just days after getting a new leg tattoo and swimming in the Gulf of Mexico, entered the hospital with an infection of the bacterium Vibrio vulnificus. After two months of battling skin necrosis and septic shock, he died.

But was his tattoo as much to blame as so many headlines would suggest? Not really. Still, the unfortunate incident does hold some lessons for those wishing to avoid the same fate. Here’s how to avoid introducing flesh-eating bacteria into your new tattoo:

Seriously. The young man in the study’s demise had more to do with his weakened liver than his choice of body art. His doctors report that the man had a history of cirrhosis, or scarring of the liver. That existing condition had nothing to do with his tattoo, and made him more susceptible to Vibrio vulnificus.

For most of us, exposure to Vibrio vulnificus will cause a few days of your standard food poisoning symptoms. Of the 80,000 people who get sick with vibriosis each year, the Centers for Disease Control and Prevention estimates that just around 100 die. But for reasons that aren’t entirely clear, folks with impaired liver function take a much harder hit: it’s possible that changes in iron levels in the blood impair immune responses, or that a decline in the body’s ability to filter blood effectively is to blame. But whatever the connection between liver disease and vibriosis, it’s no joke. They’re much more likely than the general population to develop septicemia (blood poisoning), and this makes the disease’s fatality rate jump to something like 60 percent.

And it isn’t enough to have a family history clear of liver disease, either. Excessive alcohol consumption can scar anyone’s liver. Your liver works to filter out toxic substances—like alcohol—and any damage you do to it can result in scarring as the organ tries to repair itself. This damage is permanent, and it impairs the organ’s function.

“Family history was unremarkable for any history of liver disease,” the study authors wrote of their patient. “His social history was notable for consuming six 12-ounce beers daily.”

This has nothing to do with getting a tattoo! We’ll get back to tattoos in a second, we promise. But it begs repeating: liver disease is the thing that should make you wary of Vibrio vulnificus infection, not tattooing.

When Vibrio bacteria aren’t in your body causing necrotising fasciitis (also known as eating your dang flesh) they’re found chilling in coastal waters, especially during warm months. And they’re extremely common inside tasty filter feeders like shellfish. “[N]early all oysters are reported to harbour V. vulnificus during the summer months,” the study notes, and some 95 percent of cases are related to raw oyster ingestion. Septicemia brought on by the bacterium is the most common cause of seafood consumption-related fatality in the U.S.

That means that for people with liver problems, raw oysters are a big no-no. Doctors note that popular methods of “killing” the bacteria like using alcohol or smothering raw shellfish in Tabasco sauce (what?) don’t actually work, but that cooking oysters properly will protect even those with damaged livers.

It’s true that the patient in the recent case study had a new tattoo to blame for his infection, not a trip to a raw bar. But this method of exposure is quite rare. “Infections can also occur with exposure of open wounds to contaminated salt or brackish water,” the study adds. “However, this represents an uncommon mechanism of infection.”

Remember that a tattoo is literally an open wound

Imagine, for a moment, ripping a few inches of skin off of your leg. Now imagine jumping into the ocean. Hopefully, you wouldn’t do that first thing and then do that second thing—it sounds sting-y and unhygienic. But for some reason, even though tattoos work by repeatedly puncturing the skin, plenty of people treat the area like healthy flesh while it’s trying to heal.

It’s true that unsterile instruments or contaminated ink can cause infections that begin at your tattoo parlor, but you’re more likely to introduce bacteria to the wound by failing to take care of it in the days and weeks after.

Assuming you go to a licensed parlor that shows all the signs of cleanliness—artists should unwrap fresh needles in front of you and suit up with gloves before going to town on your epidermis—proper aftercare is key to avoiding infection. If you’ve been tattooed before, you know the proper protocol: wash and bandage the area as directed (removing the primary dressing in 3-5 hours and washing gently with soap and warm water is a safe bet), then wash, gently pat dry, and moisturize pretty much whenever you get the chance for a few days to a week. Once it itches like heck instead of feeling all raw, switch from washing and drying to constant moisturizing (without dyes or scents that might irritate the skin further, naturally). DO NOT SCRATCH, YOU FOOL.

If you do all of this, your tattoo will probably heal. Once it’s healed—and only then—you can go about your usual business of sweating and swimming and getting all grimy. Until your tattoo is free of itching and flaking, you should treat it like you’d treat an open wound because THAT IS WHAT IT IS. This can take several weeks. In the meantime, keep it clean and don’t soak in water, because even your own bathtub is teeming with microbial life. Do you even know what kind of stuff lives in your butt?

How do I know if my tattoo is swarming with flesh-eating bacteria?

Okay, so, you did your best, but the siren call of the sea has led you to expose your wounded flesh to bacteria. What now?

The signs of an infected tattoo are the same as the signs of any skin infection: if you’ve got a fever and body aches, sores full of fluid or puss, or swelling, redness, and discomfort long after your tattoo should have started healing, seek medical attention. You’re extremely unlikely to suffer the exact fate of the man in this case study unless you have liver disease and jump into warm seawater with a fresh tattoo (and even then, you’re probably safer than if you had the same condition and did a bunch of oyster shooters), but anyone can get a nasty infection—even with antibiotic resistant bacteria—if they’re negligent in their aftercare. If you suspect that something is wrong with your new ink, don’t hesitate to get yourself to a doctor.