The Preservation Of Lonesome George 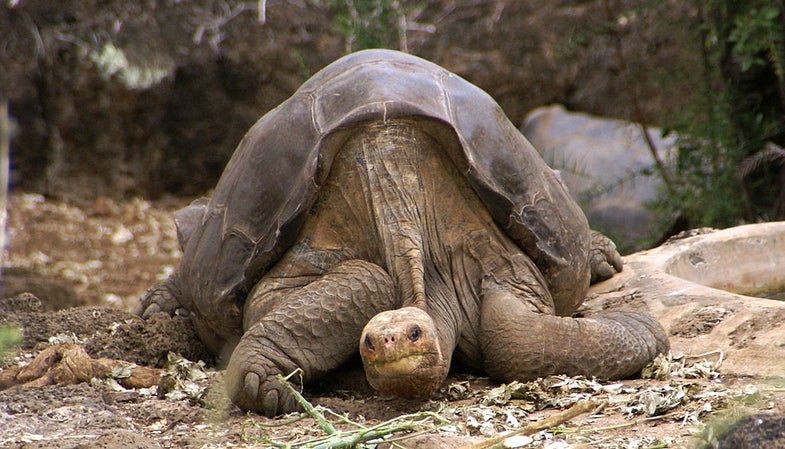 On the day that Lonesome George died, in June 2012, Eleanor Sterling made a panicked phone call. “George!” she recalls saying. “What do we do now?”

Lonesome George was a tortoise—the most famous one ever, in fact. Decades after the last giant tortoise was thought to have disappeared from the island of Pinta in the Galapagos, Lonesome George turned up in 1971 and became a conservation icon. Scientists spent years trying to get him to mate, to pass on his genes, but the efforts failed. When he died, his entire subspecies may have died with him.

“I knew we needed to do something right away” to preserve Lonesome George’s body, says Sterling. Luckily, as a conservation scientist at the American Museum Of Natural History (AMNH), she knew to call another George—specifically, George Dante, a taxidermist for a company called Wildlife Preservations, who has worked with the museum before. He sent Sterling a list of instructions on how to prevent the tortoise’s body from decomposing so that it could be taxidermied.

Some of the instructions were straightforward—such as wrapping Lonesome George’s soft parts in tissues. Others were more challenging, like finding a freezer large enough to fit the five-foot-long, 165-pound tortoise. But the biggest challenge was finding thick freezer plastic, Sterling says, because Lonesome George died in a remote part of Ecuador. When Sterling went to the local hardware store to find the plastic, they were sold out, and another shipment wouldn’t arrive for another two weeks.

“We kept asking, ‘Is it okay if they’re just plastic bags taped together?’” But that would risk letting Lonesome George’s skin dehydrate, which would ruin the specimen.

Lonesome George spent the next nine months in a freezer while Sterling arranged the permits to transfer him to the U.S. “We were biting our fingernails,” she says. “We knew when we wrapped him up that he was in really good shape, but when you live in a tropical country, electricity goes out on a regular basis.” 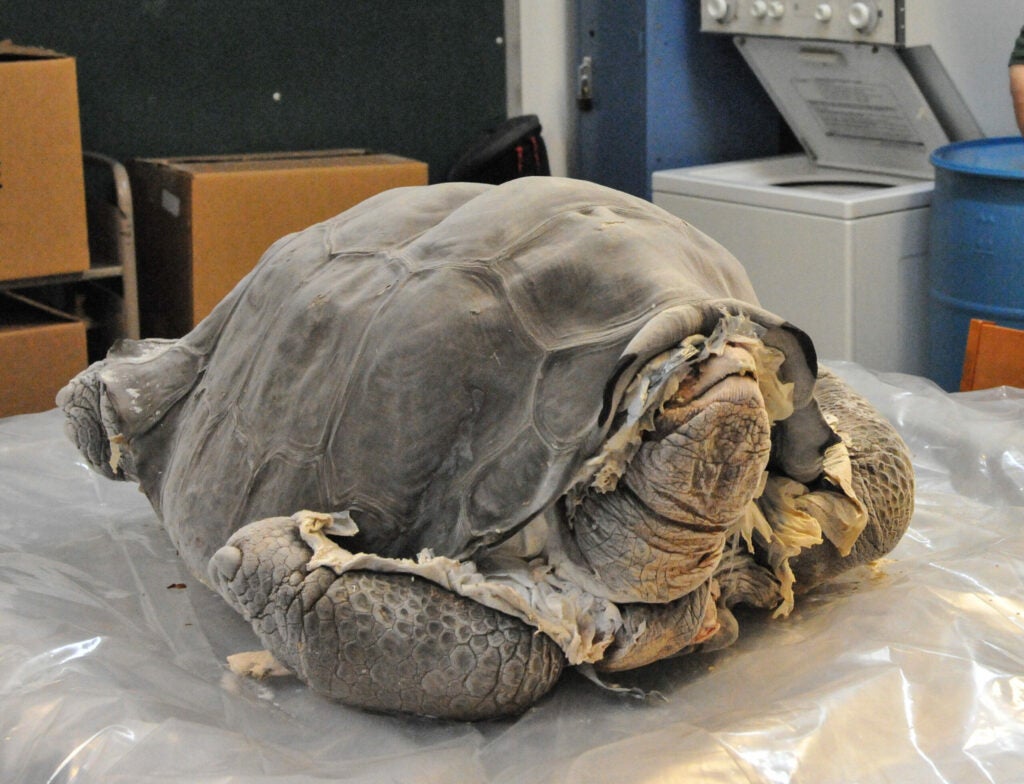 George made the long journey from Galapagos to New York, where he arrived still frozen solid, thankfully. Then began the most unique taxidermy project of Dante’s career.

“George was a piece that’s very custom,” Dante says. “A lot of times today, there are pieces that we work on, that we can purchase parts for. With George, everything was 100 percent custom.”

Since there aren’t any pre-made taxidermy skeletons for Pinta Island tortoises, Dante would have to sculpt the specimen’s inner armature himself.

In the beginning, Dante says he just stared at Lonesome George to try to get a feel for the tortoise’s character. The company doesn’t usually perform taxidermies on pets, because it’s so difficult to capture an animal’s personality in a way that makes the owner happy. George was particularly challenging because “he was like the world’s pet,” says Dante.

Luckily, George was also one of the world’s most photographed tortoises, so Dante was able to look through thousands of photos to learn more about what the tortoise was like in life.

One of the first major decisions was, “What posture should a tortoise have?” said curator Christopher Raxworthy yesterday as AMNH unveiled Lonesome George’s taxidermied body. Tortoises “spend most of their time fast asleep, with their heads tucked into their shell. But we wanted something to capture the majesty of George.” 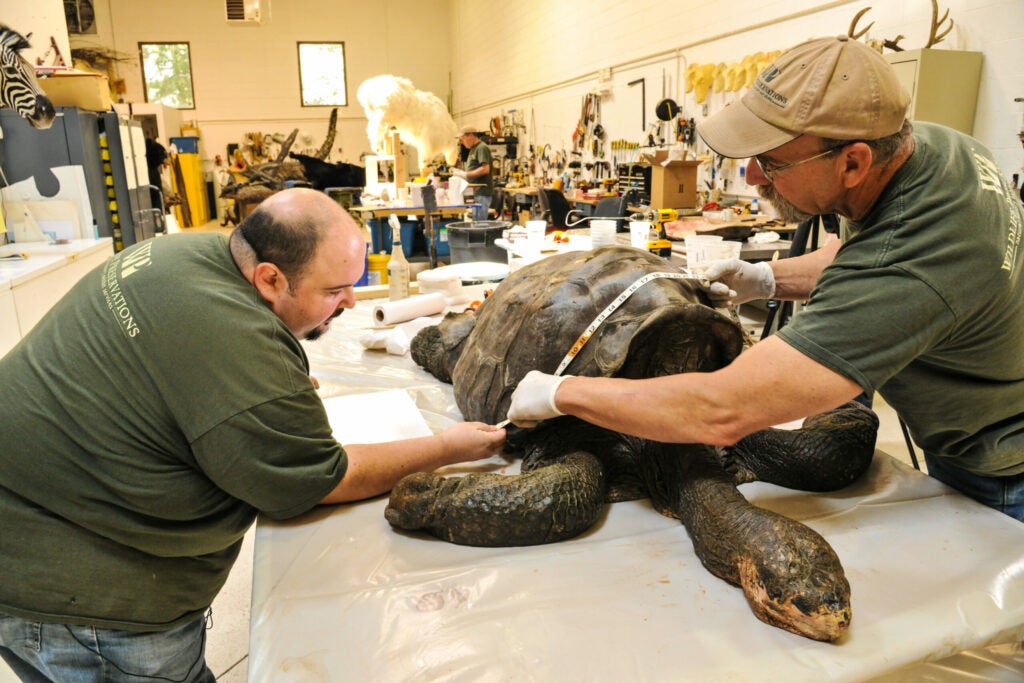 The posture they decided to go with was one of George standing and stretching his long neck upward, perhaps to grab some leaves to munch on, or to assert his dominance over other males (had they existed).

Finally, the taxidermy process began. George’s skin was removed, de-greased, and pared down. It took three people four days to remove all the muscle and fat from beneath the delicate skin, to get it ready for tanning.

During the tanning, George’s skin and shell were soaked in a chemical called Safety Acid. “It’s basically an acid bath that pickles the skin,” says Dante. After the soaking, the taxidermists shaved down the skin again and rubbed it with tanning oil, which would replace the natural proteins in the skin to make it soft and life-like.

Meanwhile, Dante’s team began sculpting the inner support structure from an oil-based clay. To see how it fit, they draped George’s tanned skin over it, and compared it to reference photos. Once the fit was perfect, the taxidermists got feedback from scientists to make sure the depiction was accurate. 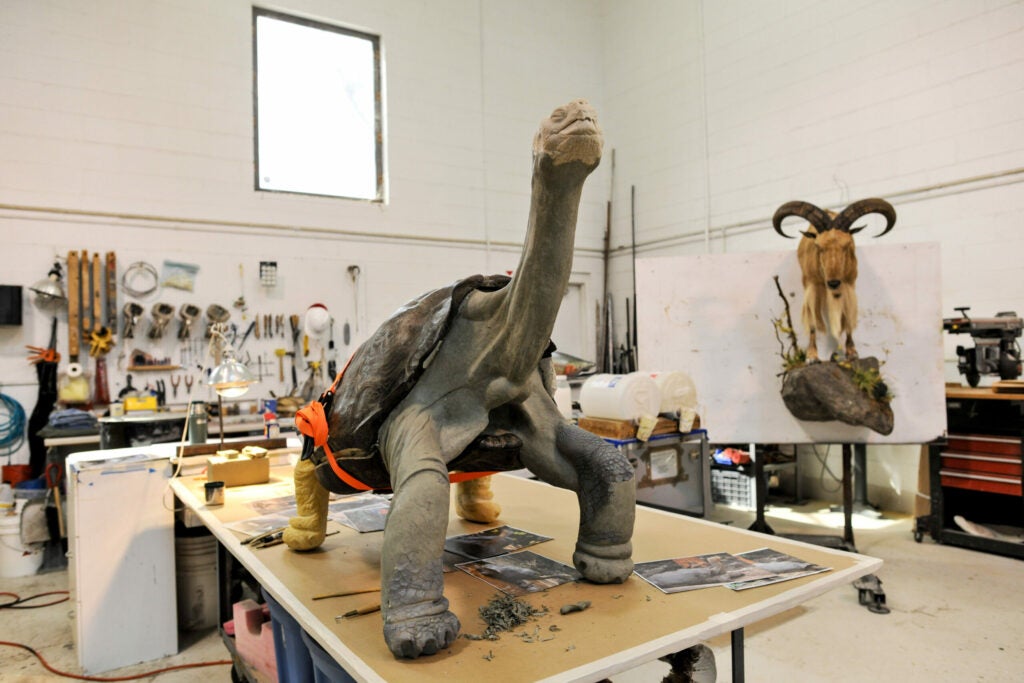 But using an armature made of oil-based clay armature would ruin George’s skin. So the next step was to create a cast of the clay armature, into which a urethane foam could be poured and shaped into the final armature. Inside, steel supports reinforce George’s legs and shell.

Then Dante’s team coated the armature in a water-based clay, draped the skin over it, and sculpted George’s wrinkles and idiosyncracies into the clay through the skin.

A coating of paraloid B72 sealed the skin and provides a protective layer so that anything that happens on top of the skin is reversible—for example, if museum curators ever need to remove George’s paint, his skin will still be perfectly preserved.

Painting the specimen was a several-day affair, says Dante. “They actually sent us a packet of soil from Pinta Island, that we used to match the colors of the actual soil, because that gave George his patina–that dust that was constantly in his shell and skin.” 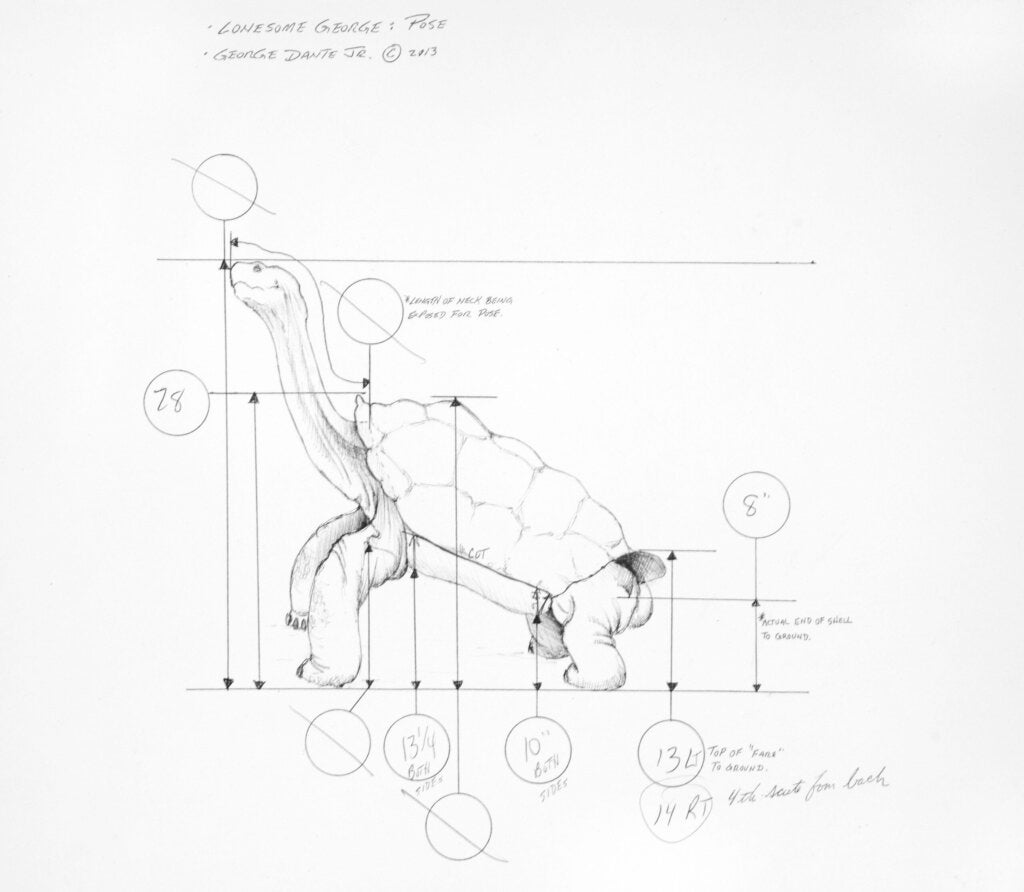 The resulting tortoise looked a little too perfect, said Raxworthy. So around George’s mouth they added the green stains of his last meal.

George’s glittering eyes had to be specially made – because, unsurprisingly, glass eye companies do not keep a stock of imitation eyeballs from extinct tortoises. To get custom-made Pinta tortoise eyes, Dante’s team needed to provide reference photos to the glass eye company. Problem was, there weren’t any good pictures of Lonesome George’s eyes.

“Every tortoise you look at on Google or in a magazine, the eyes look black,” says Dante. “Because of the light, you can’t photograph them well.” So his team ended up visiting a local zoo to photograph the eyes of other tortoises. Even then it was difficult because of the glare, until finally someone shined a flashlight into one of the tortoise’s eyes, and they got the perfect shot. “Those images went to our glass eye company to make the first and most accurate tortoise eyes ever,” says Dante.

Why go to all this trouble to taxidermy a tortoise? Because, says Dante, George was loved by too many people for his body to end up in a landfill. And there’s a chance that his preserved state could still have scientific value—for instance, scientists could extract DNA from his skin, or use the model to understand how he lived and moved. And the education value is obvious.

“Somewhere else, there might have been a decision made to just put him in alcohol–to make a wet specimen that would be in a museum collection, never to be seen again,” Dante says. “Now we have this monument for conservation that visitors can look at and make a connection with.”

Lonesome George is on display at the AMNH in New York until January, when he’ll be returned to Ecuador. 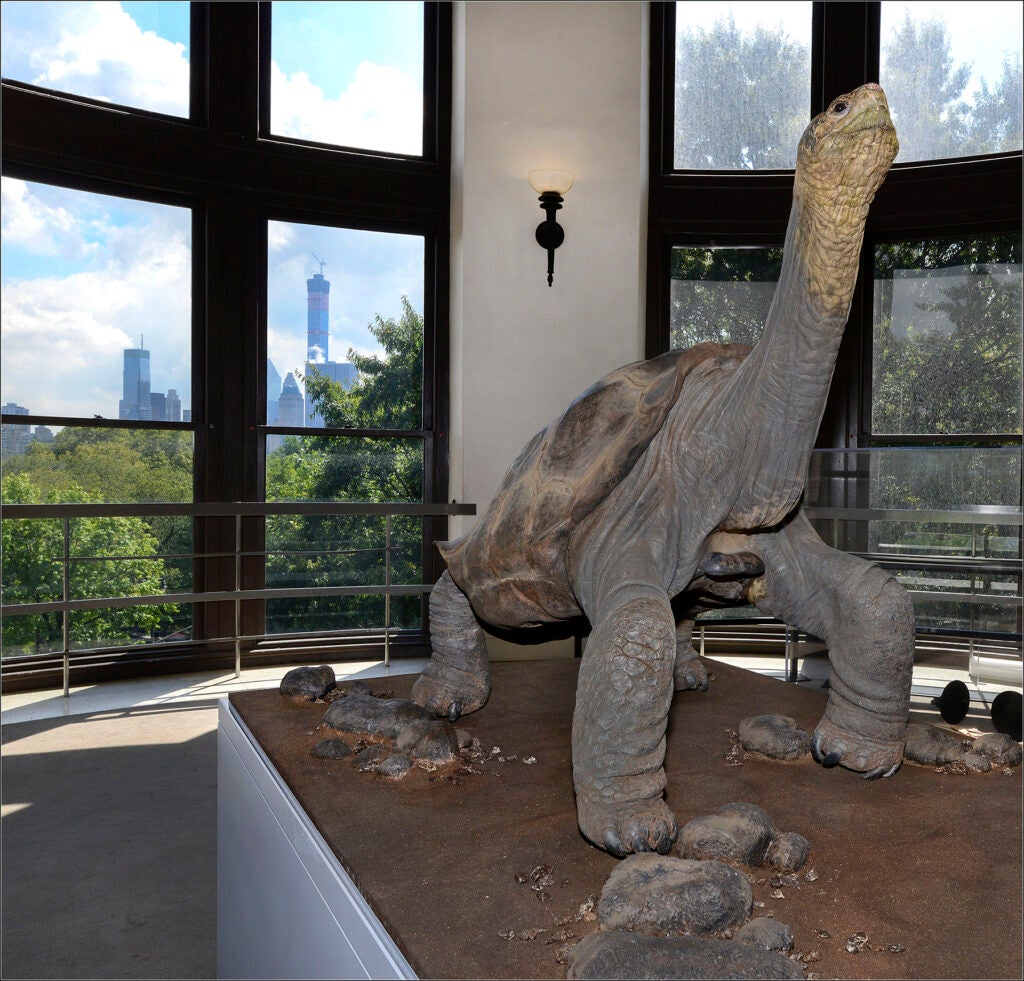 Lonesome George On Display At The American Museum Of Natural History