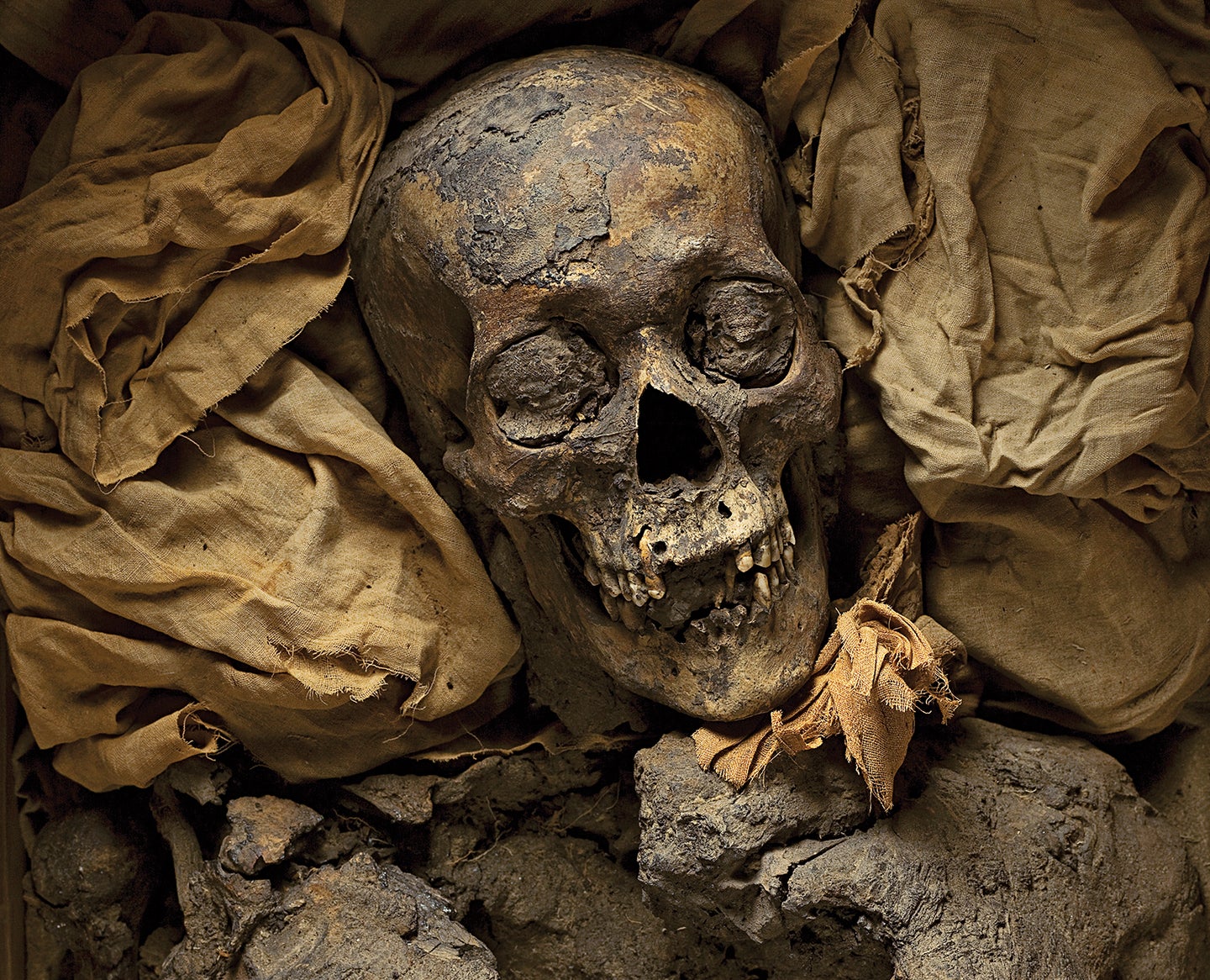 Earlier this year, scientists published a study of whole-body CT scans of 137 mummies: ancient Egyptians and Peruvians, ancestral Puebloans of southwest America, and Unangan hunter-gatherers of the Aleutian Islands. They reported signs of athero­sclerosis—a dangerous artery hardening that can lead to heart attacks or stroke—in 34 percent of them. What struck the research team, led by Randall Thompson of Saint Luke’s Mid America Heart Institute in Kansas City, Missouri, was that it afflicted mummies from every group. Frank Rühli, head of the Swiss Mummy Project at the University of Zurich, also sees the condition in about 30 to 50 percent of the adult specimens he studies. The breadth of these findings suggests that atherosclerosis today may have less to do with modern excesses such as overeating and more with underlying genetic factors that seem present in a certain percentage of humans living almost anywhere in the world. Someday, identifying those genes could lead to new drugs for heart disease.

They’re now finding signs of everything from prostate cancer to malaria in mummies across the globe.

Ancient mummies can provide a wealth of information about the health of early civilizations, which may help us better treat diseases today. But because mummies are both rare and delicate, researchers have been limited in what they could do to them—and therefore what they could learn from them. Recent improvements of two medical tools—DNA sequencing, which can reveal microbial infections, and CT scanning—are letting paleopathologists diagnose mummies’ causes of death in detail. They’re now finding signs of everything from prostate cancer to malaria in mummies across the globe. By comparing the ancient forms of those diseases with their contemporary equivalents, researchers can learn how those diseases evolved, what makes them so harmful, and—possibly—how to stop them.

In the case of tuberculosis (TB), which kills upwards of 1.4 million people a year, researchers are using DNA sequencing and CT scans in mummies to understand what conditions TB thrives in and how to treat it. Work from Haagen Klaus, a biological anthropologist at George Mason University, suggests that, contrary to what some experts think, Europeans might have brought a particularly deadly form of TB to the Americas. His preliminary DNA data hints that Peruvian remains dating back to the 10th century—before Spanish explorers arrived—might have been infected with a more benign strain of the TB bacteria Mycobacterium tuberculosis, or a different species altogether, Mycobacterium kansasii. And many studies have shown that the bodies of Central Americans from before and after European contact rarely, if ever, show signs of TB symptoms. Klaus subscribes to the hypothesis that this may be because M. tuberculosis thrives in the presence of iron, and these people ate a low-iron diet with little meat. If true, this insight could point to new drugs that would inhibit M. tuberculosis from taking up iron. 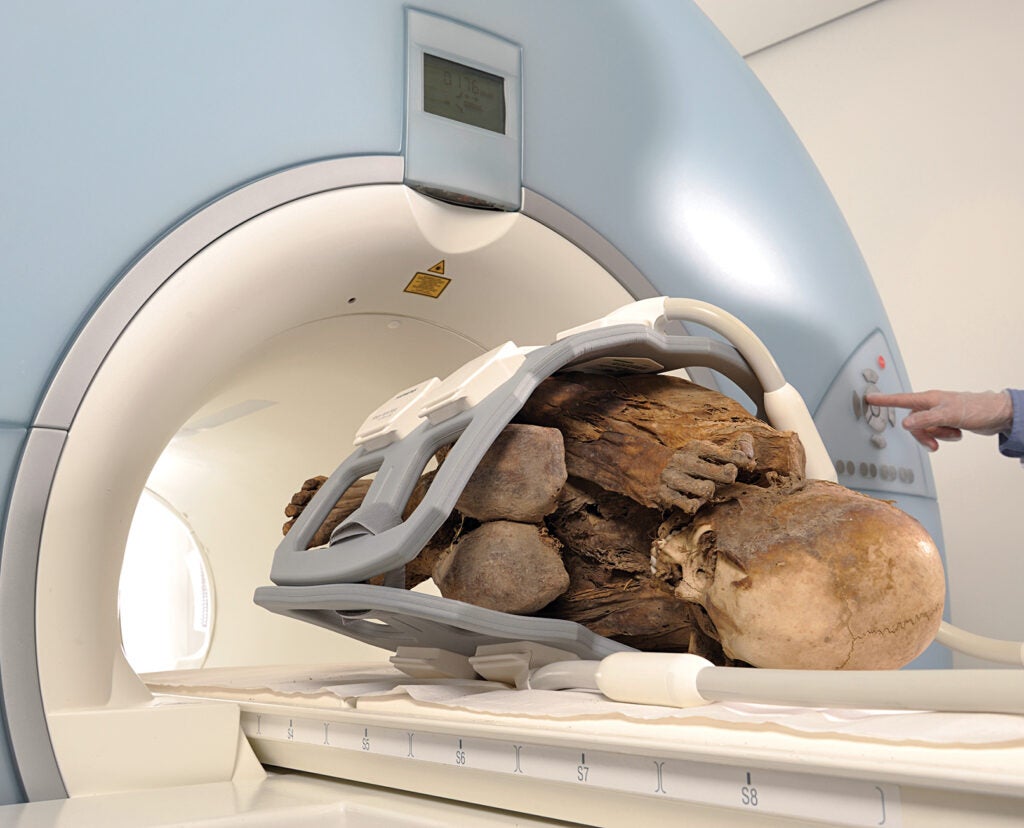 Researchers use magnetic resonance imaging to see inside mummies, such as this one from ancient Peru.

Other scientists are using DNA sequencing to investigate Chagas disease, an illness caused by the parasite Trypanosoma cruzi, which can cause fatal heart failure or swelling of digestive system organs. The parasite infects roughly 10 million people, mostly in Latin America, and appears to be spreading. Some think that different strains of the parasite affect different organs. So in 2008, when Ana Carolina Vicente and Ana Jansen of the Oswaldo Cruz Foundation in Rio de Janeiro reported their discovery of T. cruzi in the enlarged colon of a 560-year-old mummified body from Brazil, they might have come upon an important clue. Previously, they found T. cruzi in a sample of bone remains from 4,500 to 7,000 years ago. Comparing the DNA of different samples of the parasite could reveal more about its evolution and spread, and perhaps influence treatment someday.

Paleopathologists are also taking advantage of magnetic resonance imaging (MRI), which detects signals from water. Dry mummies haven’t been perfect for this technique, but recent improvements in MRI might make for better images of soft tissues, such as tongues. Plus, unlike the radiation from CT scanning, MRI has no possible risk of damaging DNA evidence.