But there are other reasons not to give in to "social jet lag." 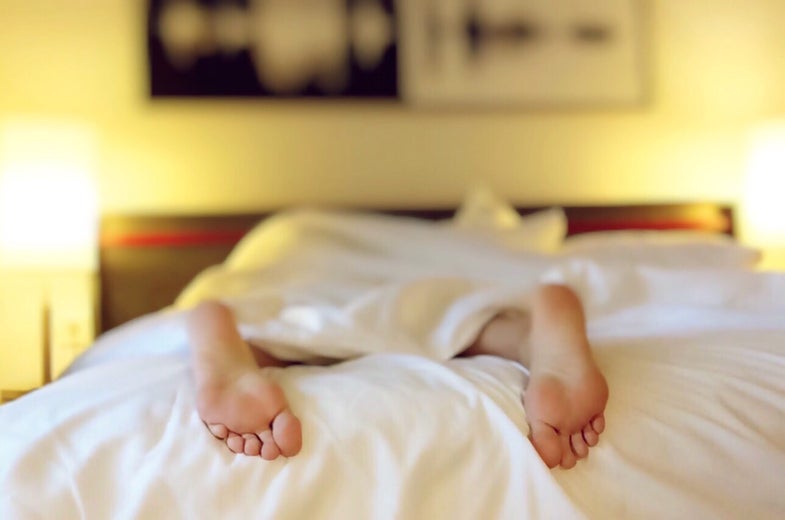 If there’s one thing you should remember when reading any piece of science news, it’s this: correlation doesn’t imply causation. It’s a tired trope, yes, and maybe someday we’ll live in a world where we don’t have to keep repeating this truism ad nauseum. Today is not that day.

You may have read headlines proclaiming that your lazy weekend sleeping habits could give you heart disease. Maybe you even know the phrase “social jet lag” now. It’s the idea that shifting your sleep schedule from night to night causes something akin to jet lag, because you’re disrupting your circadian rhythm. All these clicky declarations come from research presented at the SLEEP meeting by the lead author, Sierra Forbush, who is an undergraduate research assistant at the University of Arizona College of Medicine. The upshot of the study is this: for every hour that people shift their weekend sleep schedules, there’s an 11 percent increased risk of heart disease. That’s true. But the idea that sleeping in causes heart disease? That has yet to be proven.

The problem with most correlational studies is that there are too many confounding factors to be able to draw meaningful conclusions from the results. Yes, people who shift their sleep schedules later on weekends have higher rates of heart disease. Yes, you can control for things like income, employment, and education, all of which correlate with social jet lag—if you have a job that keeps regular Monday through Friday hours, you’re more likely to indulge in a Saturday morning lie in. But what if people who sleep late on Saturdays also drink more? That seems pretty likely. And we know that heavy drinking can cause heart problems. Or what if the layabouts also tend to smoke more? Or tend to be more overweight and eat junk food while they’re pulling late nights? Those things all increase your risk of heart disease—independent of your sleeping habits.

Other shocking results of the study included the fact that staying up and sleeping in late made people more cranky and tired. This revelation is the actual reason you shouldn’t sleep in too much on the weekends. Your body gets used to waking up at a certain time each day, and for most adults that’s the time that you have to get up for work. When you sleep in two days out of seven, you disrupt the rhythm that your body has already established. If you just sucked it up and got out of bed at the same time over the weekend, you’d cement your schedule. Eventually you’d wake up at that time naturally, which means you’d be less tired overall, and come Monday morning you wouldn’t feel exhausted because you wouldn’t be trying to shift your circadian rhythm back. The key is consistency. Right now it sounds like a nightmare to try to get up at 7 a.m. on a Saturday. But if you just did it for a few weeks, you’d get used to it.

It’s also worth pointing out that an 11 percent increased risk is pretty tiny. A single blistering sunburn as a kid increases your risk of getting skin cancer by 100 percent. Smoking increases your lung cancer risk by 2,300 percent. So let’s just keep an 11 percent increase according to a purely correlational study in perspective, okay? Now go set your Saturday morning alarm.