Is whole wheat bread better than white? That may depend on your gut bacteria.

There’s no such thing as one-size-fits-all nutrition. 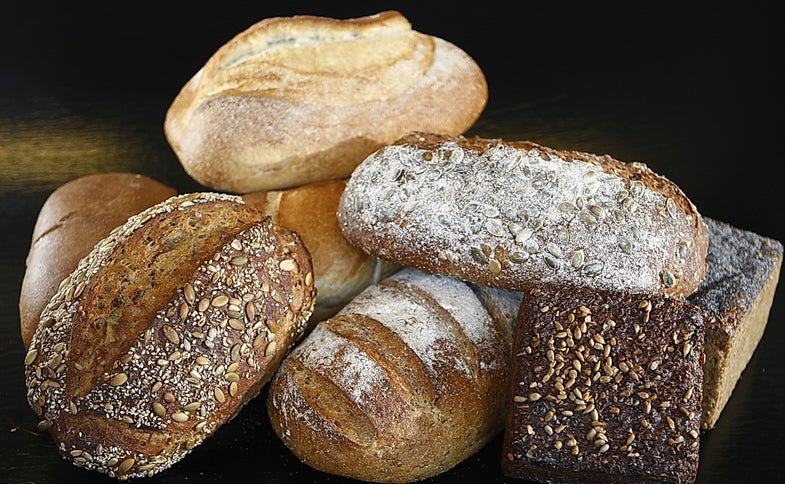 Whole-wheat bread is better for you than white bread, right? Maybe. According to a study published today in the journal Cell Metabolism, the answer depends on the bacteria in your gut.

“One of the reasons we focused on bread is that it’s one of the most heavily consumed foods worldwide,” says study author Eran Elinav, an immunology researcher at the Weizmann Institute of Science. “It amounts to somewhere between 10 percent to 40 percent of our daily caloric content. And as such there are many myths about good bread and bad bread. A whole culture has developed around it, but when you look in the [scientific] literature there’s really very little proof.”

Along with Elinav, researchers at Tel Aviv Sourasky Medical Center and Tel Aviv University spent two weeks feeding 20 study participants 6 meals of bread a day. In the first week, 10 participants received 3 meals a day of white bread along with 3 meals a day of white bread plus butter. An additional 10 participants were fed the same pattern of meals, but instead of white bread they got whole wheat sourdough bread. This was followed by a two-week washout period, so the participants could reset their guts, followed by a week where they flipped roles. Those who’d been giving a week of white bread were given a week of whole wheat sourdough, and those who had spent a week imbibing on sourdough switched to white. Throughout the two weeks of bread eating, the researchers measured the participants’ glycemic responses.

Glycemic response is a measure of how the body’s blood sugar responds after we eat a meal. While all foods cause some increase in blood sugar, some foods can cause our blood sugar to spike to unhealthy levels, while others cause a more modest increase. In general, a high glycemic response is considered bad because it’s linked to the development of insulin resistance—a precursor to Type II diabetes. Diabetes, apart from being a problematic disease in its own right, is also linked to the development of heart disease and stroke. In general, it’s assumed that highly processed and refined foods, like white bread, cause a higher glycemic response than less processed whole wheat breads.

But when Elinav’s team looked at the data in aggregate, that isn’t what they found. Neither bread was better than the other—both elicited a similar glycemic response, when you averaged out the entire study group. A closer look at the data revealed something curious, however: the data sets were showing different glycemic responses for different breads, but they were cancelling each other out.

“We discovered that roughly half the people in our study who consumed an industrialized white bread that you can purchase at your local supermarket had a favorable response to that bread as compared to our very fancy whole wheat sourdough bread, which was made in the best bakery in Tel Aviv,” says Elinav. “The other half of people featured an exact opposite response.”

In other words, from the perspective of blood sugar, there isn’t an inherently good bread or bad bread. Rather, there’s a bread that’s good for you, and that same exact bread might be bad for your friend. What’s healthy, it turns out, depends on the person.

Perhaps most intriguingly, Elinav and his team found that they could predict which type of bread would most likely trigger a high insulin reaction for each participant based on samples of their gut microbiomes.

Our bodies play host to a broad community of bacteria, fungi, and viruses that help to make us who we are. Although we tend to think of microbes as being harmful, these microbes play a crucial role in maintaining our health and wellbeing. Though research on the subject is still very much at its early stage, the microbes in our gut (which encompasses the full length of our digestive tract, including stomach and intestines), play a crucial role in digestion, obesity, and perhaps even in maintaining our mood.

In an earlier study, Elinav and his team were able to create an algorithm that would predict how a person would respond to food—that is, whether or not it would trigger a high or low glycemic response—based on the person’s lifestyle, medical background, and the composition and function of their microbiome. By taking microbiome samples of participants in this study and plugging them into the algorithm, Elinav and his colleagues were able to determine that the algorithm matched the data. Based just on the data they plugged in, they could predict who would fare better eating white bread, versus eating the whole wheat sourdough bread.

Before you start chowing down on white bread by the bagful, it’s important to note that there are some limits to the study. For starters, the sample size was small, though its experimental (rather than observational) design does work in its favor. But Elinav was mostly focused on glycemic response, not overall nutrition. Industrialized bread has a bad reputation for more than just the potential glycemic response: it’s also lower in nutrients. Whole wheat breads tend to have more fiber and vitamins, including magnesium, zinc, and folic acid. A lot of the patients Elinav studies tend to have diabetes or pre-diabetes, so focusing on health risks related to blood sugar made sense. But for most of us, there are other things to consider at mealtime.

Additionally, the study doesn’t explain the differences in the participants’ microbiomes, or the mechanisms by which these differences came about—or how they might help or hurt bread digestion. It only acknowledges that there is some difference between the microbes in a wheat-loving body and one that does better on white bread.

In other words, like most nutrition studies, this shouldn’t change what’s on your plate. Don’t move away from a diet of whole foods to one of more processed foods. What the study does suggest, however, is that if you are diabetic or pre-diabetic and notice that certain nutrient-rich foods causes your sugar levels to spike, you might be better off avoiding them and finding other, also nutrient-rich foods that don’t send your sugar levels soaring.

If enough studies like this one emerge, our growing knowledge of the microbiome could change the way nutrition is studied—and eventually, when there’s enough information, change nutritional guidelines as well. But as exciting as this research is, we’re not there yet.

One of the things Elinav’s team is doing is taking people with pre-diabetes—that is, people who don’t have diabetes yet but have many of the precursor signs—and trying to personalize their diet, tweaking their nutrition in a way intended to prevent them from getting diabetes. But that research is still in progress.

“I think this new approach, this new paradigm or way of thinking about nutrition, really flips the nutritional world on its head,” says Elinav. “It opens up some really big and exciting questions.”